For my last day in New Orleans I booked myself a second swamp tour. I debated making an excursion to one of Louisiana’s many historic plantation homes, but ultimately decided I’d rather bask in the state’s natural beauty one last time. Oak Alley would have made for a great photo-op, but there’s a real sense of rapture I feel when I’m in the bayou. It’s an utterly unique biome, distinguished by an aesthetic that is nakedly brutal. It’s an environment that’s violent and unforgiving, and yet its cruelty is affixed with so much emergent beauty. It’s not comfy or easy real estate; it’s swelteringly hot, it floods, it endures hurricanes and cyclones every year, it’s crawling with innumerable blood-sucking and disease-carrying insects, and the sheer variety of other jungle horrors make its overflowing alligator population about as bothersome as a line of indecisive pensioners in front of you at the post office. Sure, the alligators are there in abundance- but no one takes them too seriously. If you fall victim to one, it’s more or less your own fault, so there’s no safety-talk regarding a potential encounter. 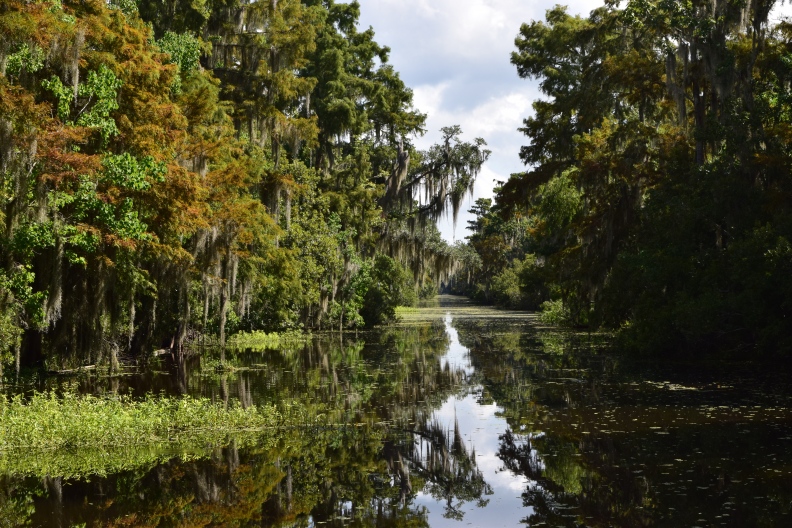 Nothing underscored this mindset better than my tour guide- a bearded Cajun who had lived in the swamps of southern Louisiana his entire life. My guide delighted in the company of alligators, and said that he took any opportunity he could get to wrestle and play with them. This hobby sometimes left him with serious injuries, and he pulled down his t-shirt to show us his most recent scar. An alligator had bitten him in the neck, which had to be fixed up with 72 stitches. This experience didn’t put him off in the slightest, however.

“We Cajuns do stupid shit out here,” he said, showing us some other scars on his forearms.

The only thing we had to watch out for, he told us, were snakes. Just like my previous swamp tour, we were instructed not to reach up into the trees because snakes are known to leap from the branches like they’re reenacting The Last Crusade.

“I’ll do anything with a gator- I’ll swim with them, I’ll have me some fun with them. But I ain’t goin’ nowhere near a snake. If a snake gets in here y’all are gonna call me Fat Jesus- because I’ll be running over the water.”

The bayou is home to all kinds of snakes- snakes that swim, snakes that climb trees, snakes with lethal dosages of venom, and snakes that constrict. I shared the man’s fear; whenever I come to the USA, snakes are the only thing I really worry about encountering. I think it’s the stealthy nature of them, and the idea of a lightning-quick bite being enough to send me to the ground, unceremoniously foaming out the mouth as my unfulfilled dreams flash before my closing eyes. Sorry- it’s hard to resist indulging in such narcissistic morbid curiosities- especially when imagining the local papers of my small English hometown sharing headlines of badger culls and flower shows with “LOCAL BOY GOES MISSING IN SWAMP. COTTONMOUTH BELIEVED TO BE AT FAULT”. Man, what a story! I’m half-tempted to plunge myself into the murky waters just to make it happen. But like all dark fantasies, it passes and you find yourself physically recoiling, as if the imagined threat had actually been there in front of you. I’ve actually had recurring nightmares about snakes before I ever stepped foot in the bayou. What’s weird is that in every dream I have, the snakes get decapitated by a meat cleaver. Either I’m doing it in self-defense, or I’m hopelessly begging someone else not to do it, or I’m doing it to an innocent snake while in a trancelike state, unable to control my actions. There’s always the same mixture of pleasure and disgust when it happens, and I wake up with a shudder.

Anyway that’s enough of that. What was great about this swamp tour was that it was completely different from my other one. The first one was near a private lake, more inland, surrounded by dense tropical woodlands, and we were on a larger boat that carried a good thirty people. The first tour was much more family-friendly as well. My second tour, by contrast, was on a high-speed airboat carrying only five people, as well as a guide with a much more liberal vocabulary. The setting too was different. I was south of NOLA this time, not east. I felt closer to the shore. The environment was that of sprawling wetlands, miles upon miles of low-lying swamplands whose freshwater canals drift seamlessly into the ocean. You could see for miles in all directions, and the boat was super-fast, which was very refreshing given the temperature.

“Where are we?” I asked when I arrived at the dock.

“We are in the town of Jean Lafitte,” the man at the desk replied. “You know, like the pirate.”

I stared at him blankly.

It took us a while to reach the bayou itself. Once we got there, the guide took us at a slow speed through a natural tunnel in the trees. The trees were so tightly packed that I wondered if we could even fit into this canal. It was like going into a cave. And once inside the bayou, we were completely shadowed by a thick canopy about an arm’s reach above us. This was the part of the tour in which we had to be wary of snakes. Spiders too. The guide pointed out the gargantuan webs that went from tree to tree, and I spotted several spiders that looked big enough to down a small bird.

We saw some alligators hanging about on land and decided to dock next to them.

“I don’t know about y’all I’mma have me some fun,” the guide said. He tied the boat to a cypress knee and hopped out. Two alligators approached him and he beckoned them closer. After feeding one a few marshmallows, he literally grabbed it by the tail and pushed it away. “Go on, git!” he said. It was the other gator’s turn. The other one approached, and after feeding it, the guide patted it on the snout affectionately. 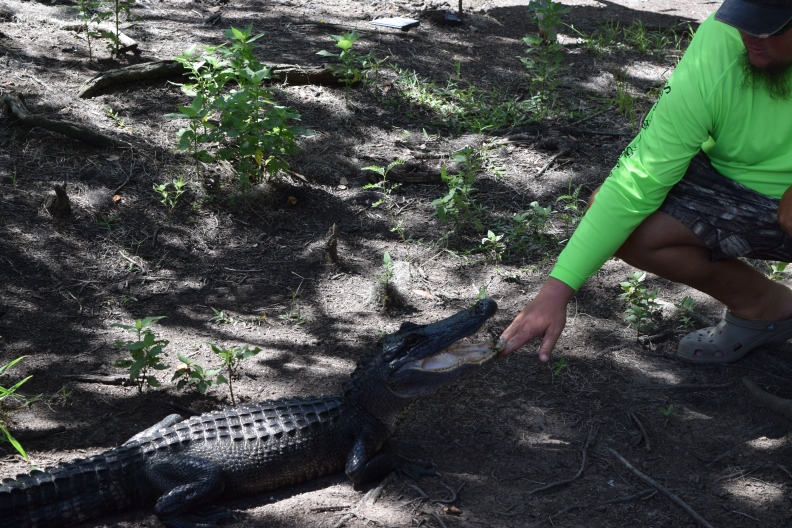 Then we were off again. We left the bayou and found ourselves in more wetlands. The guide called out for an alligator he named “Hops” and within a few minutes the creature approached the airboat. Tempting him with a marshmallow on a stick, the guide was able to get the alligator to climb on the boat. The woman in front of me recoiled. When the gator went for the marshmallow, he ended up biting off half the plastic stick as well, before cheekily diving back into the water.

“SHIT-ASS!” the guide hollered at it. “You broke my dang stick! Enjoy shitting that one out later. Heh heh.” 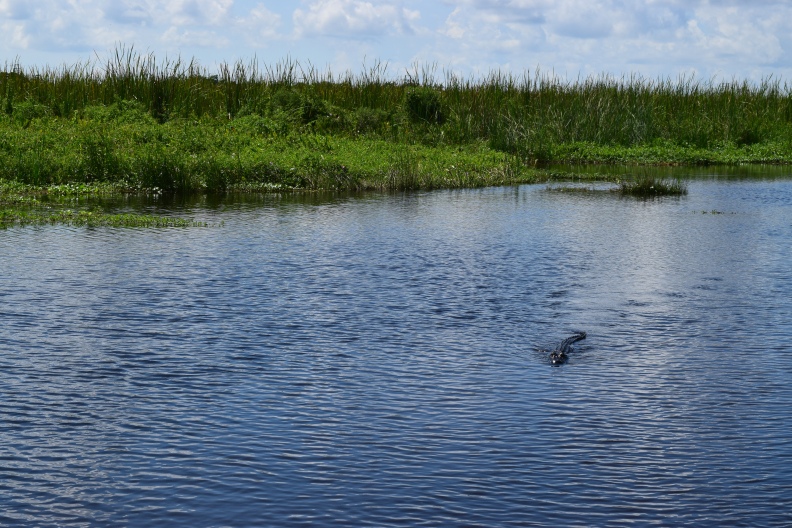 Further on in the tour we got to ask a few questions. I asked the guy if he had ever been hand-fishing.

“Aw hell no!” he exclaimed. “No way. That there is what we call really redneck. You might get that in northern Louisiana, but not down here. You’d get your arm chewed off by a snapping turtle. Yessir. That’s some redneck shit.”

I was interested in the idea of there being different classes of “redneck” or “hillbilly” within the South. I’m already aware of the difference between the Catholic, French-speaking Cajuns of the south-Louisiana swamps and the Protestant, Anglo-Saxon “twangy-voiced” population of the northern half of the state.

The guide explained to the rest of the boat that hand-fishing, or “noodling” was the practice of getting a catfish to try to swallow your arm and pulling it out of the water. I’d read about it years ago, and had written a short story about it at university. I could have sworn it was a Louisiana thing. Perhaps it’s a northern Louisiana thing.

The guide then revealed that he looked after baby alligators that wouldn’t otherwise make it in the wild. After raising them for a few years, he released them back into the swamps. He retrieved one from a cooler or something, and we each got to take it in turns holding the little guy.

It was an amazing day. I had gotten to see at least a dozen gators, and as we sped back towards the dock, I felt pleased with my decision to go on another swamp tour. As I said at the beginning, it was either this or a plantation home. I’ve seen some awesome plantation homes in Tennessee and South Carolina. They’re great and all that, but there’s something really special about the bayou as a place. I don’t know when, if ever, I’ll get to see it again. It’s a voyage to an alien world. And unlike the moon, Namibia’s Skeleton Coast, or Antarctica, this strange land is teeming with exotic life. I think my decision to go back- and the “magical feeling” I get when I’m there- is down to how far removed from my background it is. It’s almost certainly the most wild place I have ever been to. It’s the kind of faraway place that hitherto only really existed in nature documentaries, observed from the comfort of my couch with a bowl of Neapolitan to hand. To be in such a wild place is breathtaking and surreal. If I think about it, upward of 99% of my life has been spent in the comfort of metropolitan areas. Even in the small town I grew up in, my bedroom views showed asphalt, brick, and concrete in all directions. I was raised in the bosom of central heating, imported goods, and soft cushions. Getting the chance to see an environment untouched by the infrastructure of human civilization was a real treat- and something I’ll endeavor to try again as often as I can.