As the airboat approached the docks at Jean Lafitte, our tour guide gave us some parting advice. “Listen up y’all: Bourbon Street sucks. Where y’all wanna go is Frenchman Street. It’s much better. Go to a place called Dat Dog, and get the alligator sausage po’boy topped with crawfish étouffée.”

I had already been recommended Frenchman as a happening kind of place the day before, and with my stomach grumbling as the minibus crossed back over the Mississippi, I knew that my course was set. When I arrived, I found that the street was exceedingly quiet. Sleepy– that’s the word I’m looking for. There were no buskers, no beggars, and no orators narrating tall tales of vampire-BDSM to throngs of drunken tourists. And I realized, as I searched in desperation through increasingly-aggressive slants of UV-radiation, that there were benefits to such noise. Opportunities are made abundantly clear to the solo-traveler via the whims of crowds. I didn’t see much on offer on this famous street, but perhaps I didn’t know quite where to look. I ended up going way past my intended destination and finding myself in a deserted residential neighborhood. I walked back the way I had come and found that Dat Dog was in fact near to where I had started on Frenchman.

Dat Dog was exactly the kind of place I sought after, but which I had struggled to find during my stay in the Big Easy. It was quirky, inexpensive, and it served good food. It was the kind of place perfect for a solo traveler on a budget. And I realized that the best way to find local favorites was to talk to locals. Shocking revelation, I know. Too often I had ended up at restaurants way above my price range (and scruffy demeanor), because that’s what happens when you rely on guide books and Google reviews. As I annihilated the alligator hot dog before me, I made a note to inform my future solo travels: ask locals for their recommendations more often.

With just an afternoon left with which to enjoy the city, I decided to make another attempt to get to the zoo. I tried the same streetcar stop I had waited at to no avail the day before. A trolley came along and I asked the operator if he were bound for Audubon Park. No, was the answer. I had to get the St Charles Streetcar, which was green. This, I should also note, seems to be the most historic of the city’s trolleys. To get it was a bucket list item in and of itself. So I set off at a brisk pace and saw that a green streetcar was escaping west. I attempted to chase it, but it always seemed one block ahead of me. I was reliant on the unrealistic expectation of it stopping for a long while, perhaps as some granny made her way down the aisle and tripped on the last step. Unfortunately, that didn’t happen.

It was hot, and after walking several blocks I had to admit the madness of my plan. At this rate I was going to end up walking the whole way, which could be a good hour or two. Remembering that fancy hotels often had taxis waiting outside, I sought out one of those big-ass skyscraper hotels. The driver was absorbed in his phone (no doubt he had just found out you can farm Bastila Shan shards and was using up his bonus energy), so I tapped on the window to get his attention.

Within 15 minutes I was at the zoo. I love animals, but seeing them in enclosures just doesn’t capture the wonder of doing so in the wild. And just that morning I had seen a dozen wild alligators up close. I’ve never been crazy for zoos to be honest. I figured it was more of a family environment, and I’d enjoy it more if I was a kid- or if I had kids. It wasn’t overly busy; it was late afternoon by this point. I liked the Sun Bear, because I got a good view of him, and he was majestic. I waited for the orangutan, but he never showed. A guy told me that earlier the ape had been running around with a cardboard box on his head. I moved on, making a concerted effort to stop at every enclosure and read the plaques. I had to get as much out of it as I could, and justify coming all the way out here. 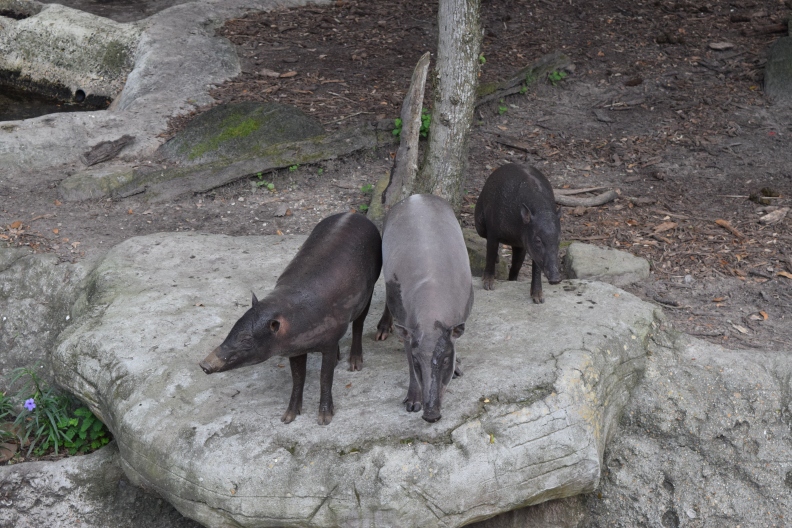 When I reached the giant anteater, I was joined by a little girl and her grandma coming the opposite way. The grandma glanced at the animal, but carried on walking. I studied it for a while longer. I couldn’t tell if the little kid realized her grandma had gone off when she asked over her shoulder: “What animal is that one?”

It would be rude to ignore her right? So I answered.

“It’s an anteater,” I said, speaking in a slow, clear voice, and masking my British accent. I wanted to say it right- the burden of education had been thrust upon my shoulders- so I put emphasis on each syllable, as if anteater were two words and not one. The girl stared up at me, and I detected a tremble of fear or awkwardness in her face. Maybe she didn’t know what to say, I don’t know. Maybe I look dangerous? I offered her an encouraging smile. The girl stared at me with wide eyes as if debating whether it was right to talk back or not. Then she abruptly ran away.

At that point I hurried in the other direction, as though I had committed a crime of sorts. I felt awkward, as though looking scary was enough to convict me of something. I imagined the grandma chasing after me through the bamboo forest, pepper-spray in hand.

The zoo goes in a loop, and as I reached the halfway point, I could really feel the humidity getting to me. I was ready to go. I can’t remember ever feeling that overwhelmed by humidity. It was certainly the hottest day of my trip. I passed by a little waterpark for kids within the zoo and lamented that there weren’t such facilities for adults. Perhaps the zoo was a bad idea, I thought to myself. I don’t make much sense here, sensitive, introspective solo-traveler that I am. I should have stuck to the solemnity of museums and art galleries. I’ll come back when I’m in company and enjoy the zoo as it’s meant to be enjoyed; via the energy of social intercourse. 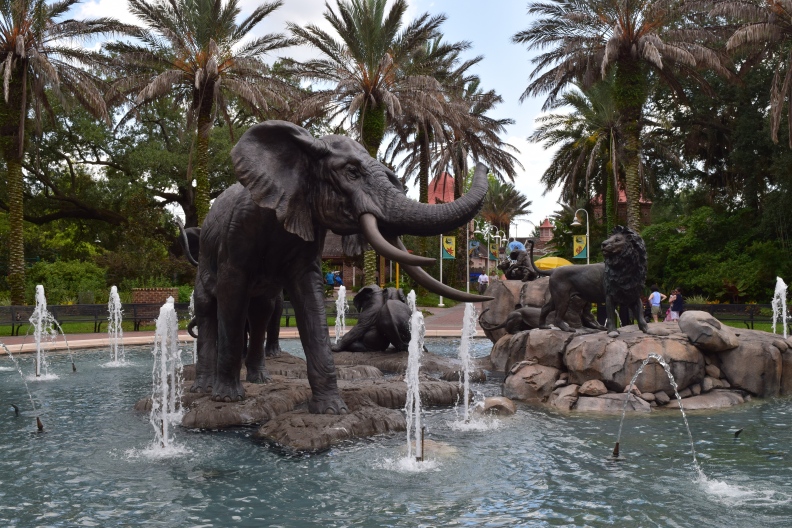 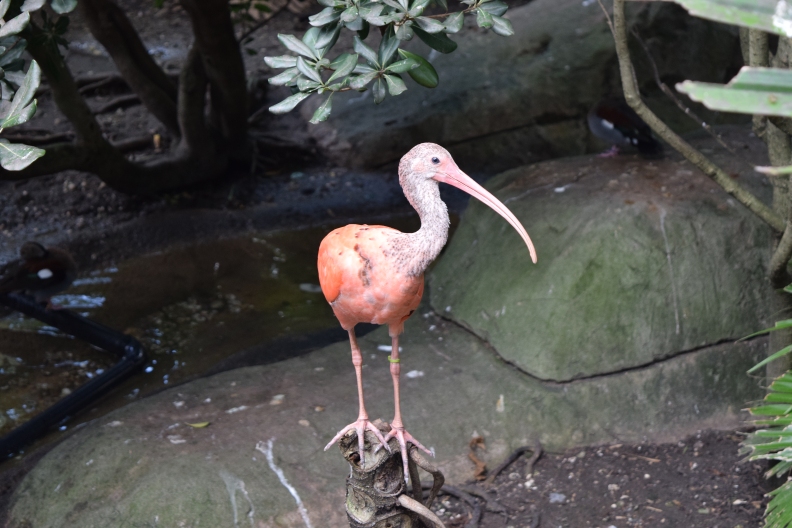 As I exited the zoo I thought about how best to get back to the French Quarter. I could walk, but I’d probably succumb to the elements before I made it halfway through the Garden District. I was already feeling massively dehydrated and my feet hurt. Walking also ran the risk of getting picked off by serial killers and gangbangers. I couldn’t call a taxi because I don’t have a U.S sim card. My phone was also out of battery, so I got my map out and realized the nearest streetcar stop was on the other side of Audubon Park, which is huge. So I started walking, wondering what time I’d make it back.

The park seemed to go on forever. It was mostly deserted, but I did pass the odd shirtless maniac braving the heat to go for a run. When I reached the end of the park I saw this shelter, designed it seemed, for those like me struggling in the humidity. An intense relief washed over me at the sight of a bubbler. I was going to make it after all. After drinking my body weight in fresh water and pissing it out like a racehorse watching looping footage of Victoria Falls, I found the stop and hopped aboard the famous green streetcar. I recovered very quickly. The Garden District passed me by as a series of historic mansions and ever-so-sylvan family neighborhoods. I read the fiction of Sylvia Brownrigg, enjoying the slow ride. With my last day in New Orleans all but complete, my thoughts turned to Texas, and the long train ride that awaited me the following morning.