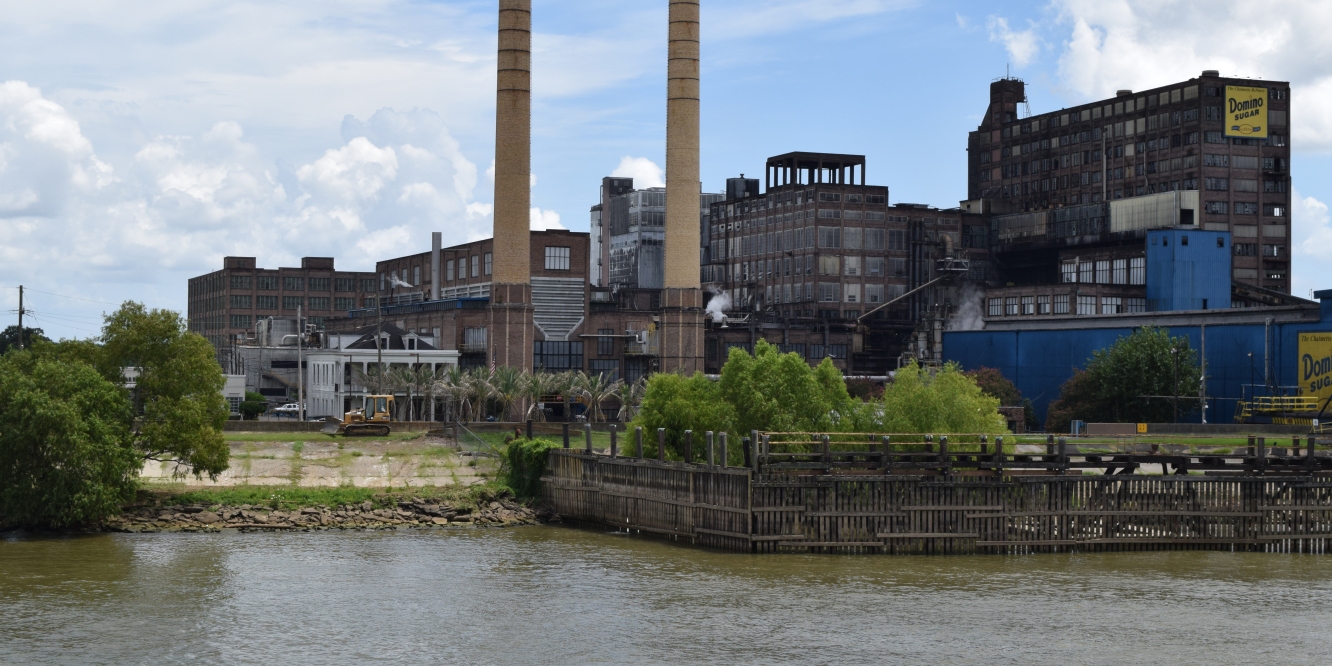 My fourth day in the Big Easy began with a steamboat tour of the Mississippi. I’d seen the large crowds waiting in line for the Steamboat Natchez several times during my walks around the French Quarter, but for whatever reason I wasn’t tempted to join in the fun implicit in the vessel’s authentic steam calliope, whose merry tunes follow you all around Jackson Square. It was on the day before, after my return from City Park, that I decided I needed to book more tours and activities, and so I took a chance on the steamboat. I’m glad I did. The ticket was a very reasonable price and I paid extra to get a buffet lunch onboard. By noon, August 6th, I was chomping down on several helpings of fried chicken inside the Natchez’s historic dining hall.

Not wanting to miss anything, I went up to the deck soon after finishing my food. As I’ve said before on this blog, I’m obsessed with the industrial aesthetic. And New Orleans has warehouses, cranes, shipping containers, and tugboats for days. We passed by the immense Domino Sugar Factory in Chalmette and I marveled at its crude grandeur. It was spectacular. When the Natchez turned around I went back to the dining hall where the jazz band started playing. This was good shit, some real Nucky Thompson shit, that they had going on down here. I was thoroughly entertained.

My aim for the afternoon was to go to the zoo. I’m not particularly crazy about zoos, but it seemed like one of the city’s main attractions. Clouds gathered, and as I stood at one of the stops on Canal Street hoping to find the right streetcar, I began to question the whole idea. I abandoned it abruptly, and headed back to the Quarter. I wandered north a little and ended up at the strangest place I encountered on my entire trip: Dauphine Street’s “Museum of Death”. An apocalyptic bang precipitated an orgy of rainfall, and I staggered into the building with my hair about my face. I asked the guy at the desk what the rules were about taking photos. He answered in an overly-calm monotone that were I to take any photos, I would be “thrown out onto the street”. I thought that such an image was a little unnecessary, but he nonetheless answered my question. No photos. So I therefore have nothing to show you from this part of my day. I asked him if his museum would give me nightmares and he replied with “That’s a risk you gotta take”.

I entered through this curtain that made me think of houses of mirrors you would see at carnivals. The museum itself is a lot like the Black Museum from the fourth season of Black Mirror (minus the cyberpunk technology). The displays included graphic crime scene photos, prison shivs, the underwear of executed death row inmates, letters and poems written by serial killers, death masks, mortician apparatus, mummified remains, human skeletons, hair recovered from a crime scene, Jack Ruby’s business card, Manson family photographs, 9/11 stuff, and a Kevorkian “suicide device”. At the back there’s a “Theater of Death” which has gory autopsy footage on loop. At this point I wondered if the whole thing wasn’t a little fetishistic, and had to double-check that no one in the back row was furiously beating their meat. The last exhibit was devoted to tribes in Papua New Guinea that engage in cannibalism and headhunting. I admit to finding this rather interesting, and there were several shields and spears on display. There was also a good number of shrunken heads from the Amazon rainforest, which, upon leaving, I decided to ask the guy at the desk about. The man was delighted that I had a question. He told me that genuine shrunken heads are very expensive, and that if I see one in a shop window, it’s probably a fake. What the tribes do is take off the skin and put hot coals or something inside to keep the shape. It was strange to think that this little head on a shelf had once been a human being, that he or she had once laughed, cried, stubbed a toe, farted loudly, fallen ill, dreamt, kissed, fucked, felt awkward, gotten lost, held regrets, and expressed their thoughts in a way entirely their own.

Outside it was still hammering down with rain. I followed the sound of jazz towards Bourbon Street. There’s something about the synergy of jazz and rainy sidewalks that seems so natural. I passed a fancy, upscale restaurant with a bar area at the front. Without really knowing why, I turned around, doubled-back, and entered it. I sat down and asked for a Hurricane. The bartender was a pretty blonde named Ashleigh. I was her first customer of the day. We ended up chatting for over an hour and she told me all about her passion for Lord Byron’s poetry and a road trip to Ohio she was about to take with her dog. It felt nice to make a friend and have an extended conversation with someone new and interesting. It’s what I always want from a solo trip to a foreign city but can rarely find. People are more interesting to me than landmarks and exhibits. Given my taste for Hurricanes, she recommended I try a cocktail called the Planter’s Punch, which I also liked a great deal.

My final stop for the day was just around the corner from my hotel- the Historic Voodoo Museum. I wanted to learn more about voodoo culture, especially all the stuff about zombies. It was an interesting museum full of beautiful voodoo art pieces- however it is pretty small. The whole thing is two small rooms, but what there is, is excellent. I stepped back onto the street to find that the rain was dying down, and headed back to my hotel. It had been a great day, and I knew that the French Quarter would be a part of me forever.