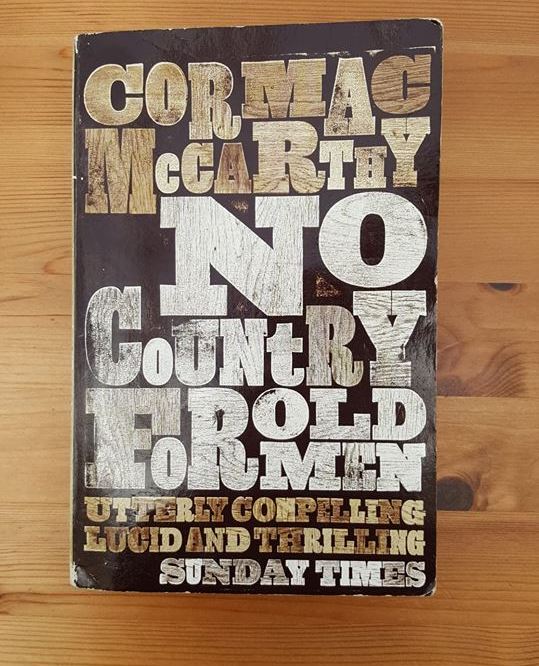 Between my job, my novel, my travels, and this here blog, it’s been a chaotic and frustrating year for my reading. As I have stated in some of my recent posts, 2018 has so far been a year in which I’ve felt a little stressed and a little anxious. I’m awful at balancing multiple targets, at tending to each with equal effectiveness so that no one target stagnates. It’s all self-inflicted of course, and I’m going to spend the second half of 2018 trying to improve my lifestyle. Anyhow, I just finished reading Cormac McCarthy’s No Country for Old Men, having started it a few months ago. One thing I noticed is that my pace picked up massively after the first 100 pages. I think this is for two reasons though; the first being that those initial 100 pages were read in March-April during which I had just started work at the warehouse. After my trip to Hungary I didn’t touch the novel for almost two months, before returning to it again in June. Since my rediscovery of my love for reading in 2017, I’ve been on a hot streak with books and haven’t given up on a single one. So I picked up where I left off with McCarthy, determined not to break my streak of finishing every book I’ve started since January 2017. And it’s not like I wasn’t enjoying the book. Which brings us to the second reason: although I liked the first 100 pages or so, I wouldn’t say I was hooked. However the next 200 pages of the novel I consumed with a feverish hunger. I really started to get invested in the characters and their struggles once I got to the hotel shootout where Moss first encounters Chigurgh.

I had seen the film version of No Country for Old Men years ago, but I didn’t quite remember everything about it when I started reading. I received my copy of the book as a Christmas present last year, and figured it would make an interesting contrast to my last read- The Center of Everything. When I finished the book a couple weeks ago, I re-watched the Coen Brothers’ movie adaptation. Right off the bat I knew that I could never love the movie the way I had before I read the novel. And I used to love that movie. I’m not at all one of those pretentious bibliophile cum-rags that insist the book is always better than the movie. I can think of loads of examples where the movies outdo the original source material: The Last of the Mohicans, The Godfather, There Will Be Blood. But No Country for Old Men certainly isn’t one of them. The Coen Brothers are good at making films, but Cormac McCarthy is a living genius. The Coen Brothers adapted McCarthy’s novel as well as it can be adapted, but having read it I don’t see any way in which a movie could have anywhere near as much depth and complexity. And as I stated earlier, that’s not because books are inherently superior. Each art form has its advantages and disadvantages, depending on the kind of story you want to tell and the effect you want it to have. And the advantage a novel has is how far you can go into the souls of its characters.

Once I re-watched the movie, having read the book, I felt a pang of disappointment as I realized that all I was watching was a watered-down version of the same narrative, with nothing particularly outstanding in it that didn’t come originally from McCarthy’s mind. Even the dialogue was lifted straight from the text. For obvious reasons it’s abridged, but the way it’s been cut and pasted into the script means that it lacks the flow of the scenes in the book. It’s not as punchy and powerful.

The character of Chigurgh feels similarly hollow compared to his counterpart in the novel. The film makes him out to be more of a bogeyman or an alien, whereas in the book he is strikingly articulate. The passages where he gives us an insight into his strange worldview and twisted morality are some of the most fascinating in the book. When I was reading those passages, I didn’t interpret him as just some crazed lunatic- and that didn’t make him any less menacing either.

One of my favorite aspects of the book was the relationship between Sheriff Bell and Chigurgh. They never meet or have a conversation, but they’re connected. Bell is obsessed not just with catching Chigurgh, but with understanding him. He becomes the personification of a heartlessness that chills Bell to his very core. And Bell always interprets Chigurgh as being the symptom of something larger- a new breed of killers toting a violent, remorseless philosophy that he feels incapable of dealing with. In the novel you really get a sense of how invested the sheriff is in the case, and why, at the end, it consumes him. But in the film we are given very little of Bell’s motivations, so that he seems hardly bothered with what’s going on. The Bell of the novel seems much more agitated and much more desperate to solve the case.

I think the moment I went from simply enjoying the book to falling in love with it occurred in the lengthy denouement. And this is where my criticism of the movie does feel a little unfair. There is no way a standard, feature-length movie could replicate such an ending without killing the pacing. But in the context of a novel, the pacing of the last 50 pages is perfect. It’s a beautifully subtle and understated conclusion to such a bloody narrative. Bell tries his best to track down Chigurgh but he slips through his fingers once again. He is, as Bell says, a “ghost”.

You really get a sense of how deeply the murder of Carla Jean affects the sheriff. And it’s the catalyst for Bell’s unravelling in those final 50 pages or so. Bell confesses that, his whole life, he has been haunted by an experience in World War 2 in which he abandoned his men in order to save his own skin. He survived, his buddies were murdered by the Nazis, and the army gives him a medal for bravery. What I found most interesting about his confession was his idea that since then, he has been living “a stolen life”. He believes that he ought to have died in that field with his fellow soldiers, and this echoes Chigurgh’s fatalistic philosophy. Chigurgh tells Carla Jean, before he shoots her, how every little event, non-event, decision, and decision-not-taken, in her life led to her death at his hands. All roads lead to the same place. Bell feels like he cheated death- or better yet- that he avoided his destiny. Having sworn a duty upon entering the armed forces, his path was set for him, and he reneged on his oath instead of seeing it through.

I can’t stop thinking about his “stolen life” remark though. It implies that he was never meant to return to Texas, marry his wife, serve as sheriff. To him it feels fake, that he is living someone else’s life. It was someone else that was meant to marry Loretta and hunt down Chigurgh. These thoughts send Bell into a depression. We realize that it was his shame and his feelings of inadequacy that drove him to running all over Texas trying to solve a case that was far beyond his jurisdiction. Moss is a member of the community he swore to protect, and in trying to save him Bell is really looking for a second chance to save his wounded men from the Nazis. Bell is driven by a sense of failure, and for me he is the most fascinating character in the book. It was his journey that affected me the most.

Not every Cormac McCarthy book is a page-turner. They’re all brilliant in their own way, but if I’m going to the beach I’m probably not packing Suttree– for the same reason I wouldn’t pack Proust’s In Search of Lost Time or Solzhenitsyn’s The Gulag Archipelago. But I would pack No Country for Old Men. It’s layered and intelligent but it’s also a hardboiled thriller. The language is so crisp and succinct. There are echoes of Dashiell Hammett and James M. Cain in the dialogue that made me think McCarthy was having a lot of fun writing his own stylish noir.

In conclusion, this was an awesome read! However I’m going to change it up and read something more sentimental next.

One Reply to “No Country for Old Men by Cormac McCarthy”