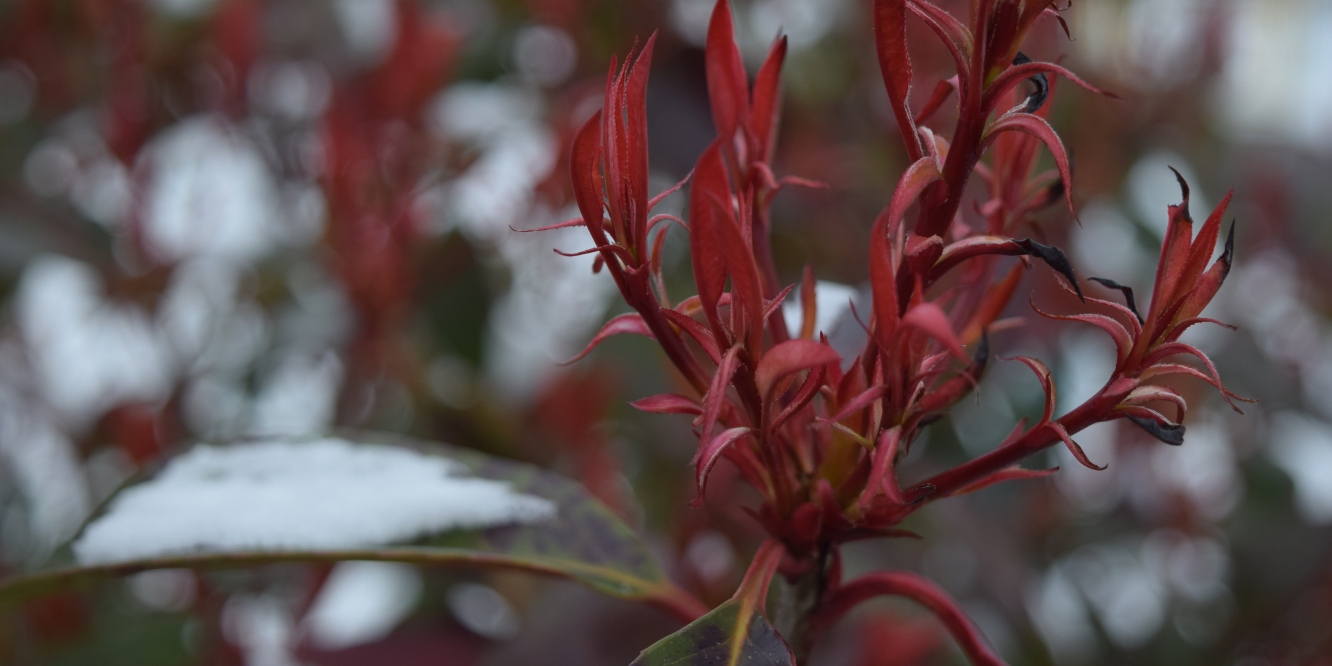 When my Americans ask me how often it snows in my hometown, my answer is invariably “almost never”. Nailsea, though far from resembling a tropical paradise, is situated in a region of England that is comparatively warm. A couple weeks ago, we were treated to more snow than we’d entertained in years. A storm that formed in Siberia blew westward, and all of a sudden we had puffy snow. Actual snow. The kind you see in snow globes and Christmas cards. What made it all the more bizarre was that this was happening in March.

Because this kind of weather is so rare over here, it’s seen by most people as a romantic novelty. Unlike Wisconsin, where even an ice storm won’t be enough to get you out of class, everything shuts down here at the sight of half an inch of wintry dandruff. I noticed that a lot of folks took to the streets. There were more people outside than on a sunny weekend in July. Kids in mittens, being pulled along on sleds. Teenagers having snowball fights. Families building snowmen. The view outside my window was tantamount to a Currier & Ives lithograph. Scowling at the scenes of idyllic wholesomeness from my bedroom window, I decided to stay inside and nurse my three-day headache with painkillers and boiled water.

Yesterday, however, the snow came back. Having already gotten a lot of writing done that weekend, I decided that this time I would go outside and take some photographs. For some reason, I just felt like getting out. 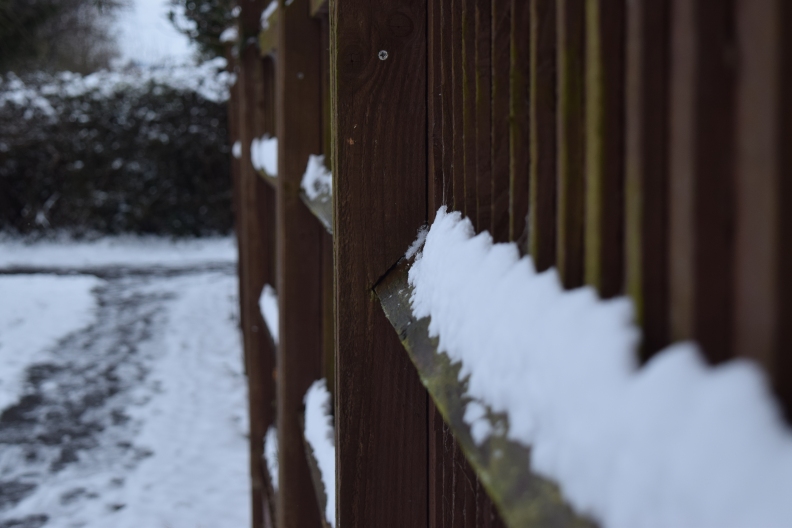 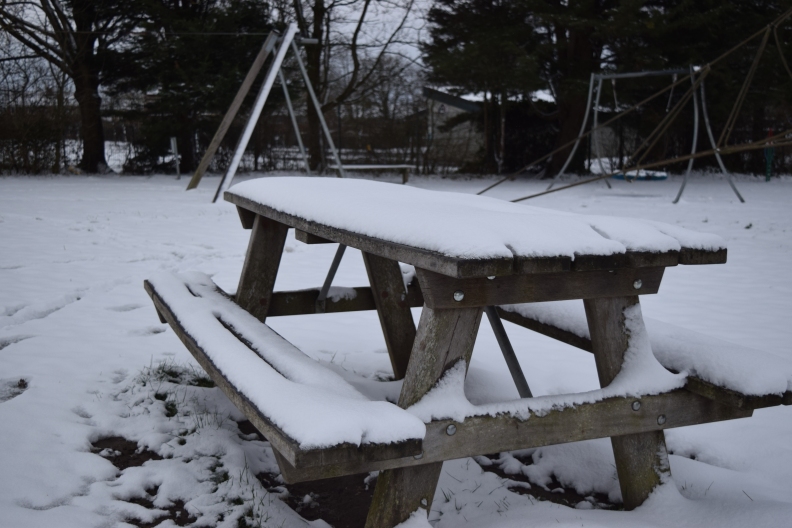 I decided to head in the direction of my old Primary School, and ended up on a trip down memory lane. The first place I came to was a block of terraced houses that surrounded a flat green. I cast my gaze at a street corner, the bollards topped with tufts of snow, and recalled the long afternoons we spent playing there after school. Sometimes a big group of us would play “Manhunt”, other times a small group of us would sit on the benches talking about the future. I had a girlfriend at the time, which in those days of innocence meant sending each other love notes and having pretend weddings ordained on the schoolyard by a fat friend. I remember the girls watched as the guys wrestled on the grass. My girlfriend said “You’re a really good fighter” and we kissed, standing on the same street corner I looked at now, 14 years later. We probably thought that we’d get married. As I continued my walk past the bollards and left the memory behind, it seemed so strange to me that all that happened, that I was the same person. Other than the name “Michael”, I don’t see what else I have in common with the little guy. 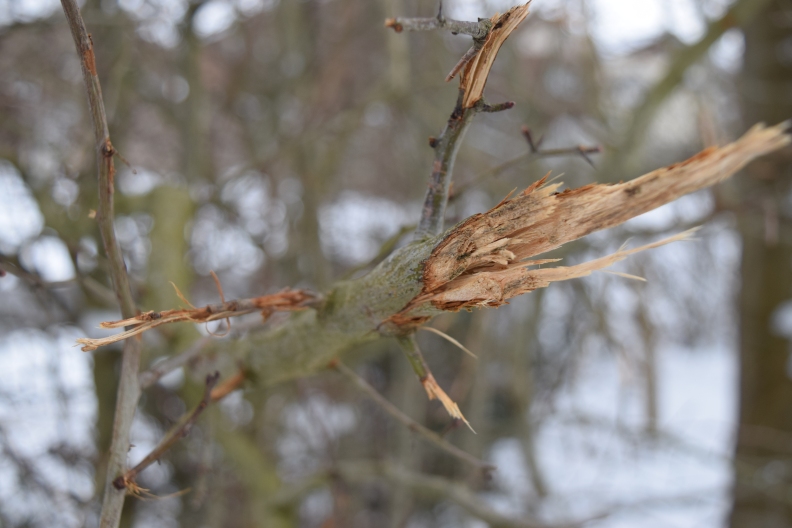 As I got closer to my old school, I came to a kid’s park. No one was out here pulling sleds or throwing snowballs. It was just me, the snow, and the memories buried underneath. 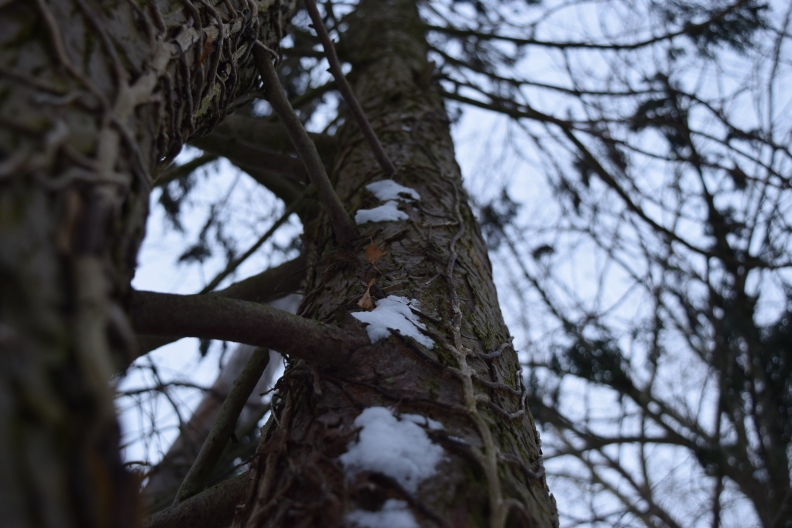 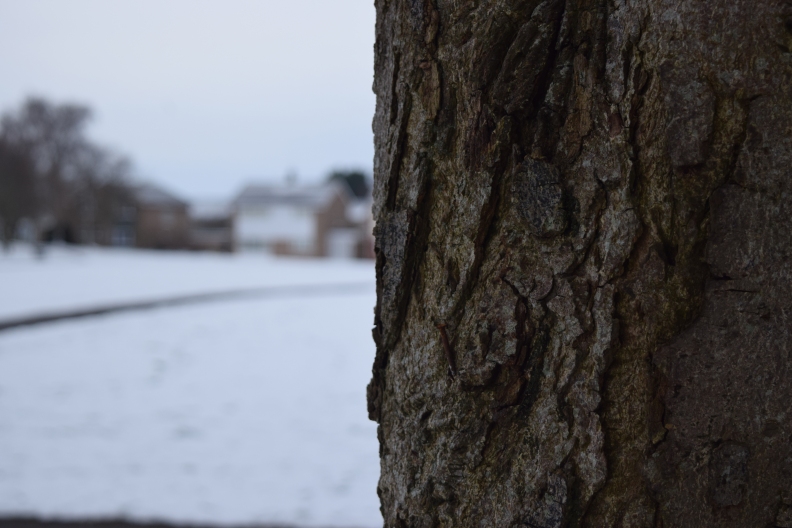 The school is bordered by a tall metal fence, which in turn is bordered by a row of tall, piney trees. At the corner of the fence that separates the kid’s park from the school field, there’s a little space in the trees that my friends and I used as a secret den. Having nothing better to do with our afternoons, we decided fix the place up. We sent out search parties to gather resources, and ended up stealing a load of rope and buckets from the bed of a nearby truck. We showed our spoils to the rest of the group, who ended up making a pulley that carried buckets to those on lookout duty at the top of the tree. We didn’t really have anything to send up there, but we just admired the working contraption for what it was. 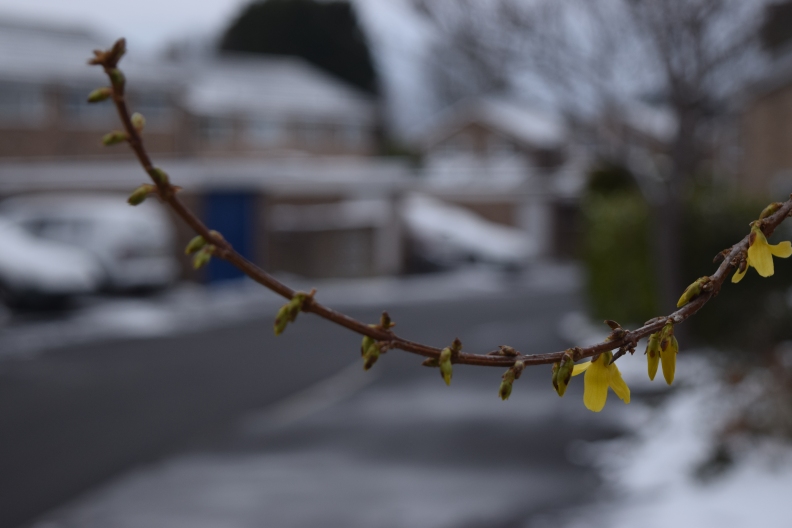 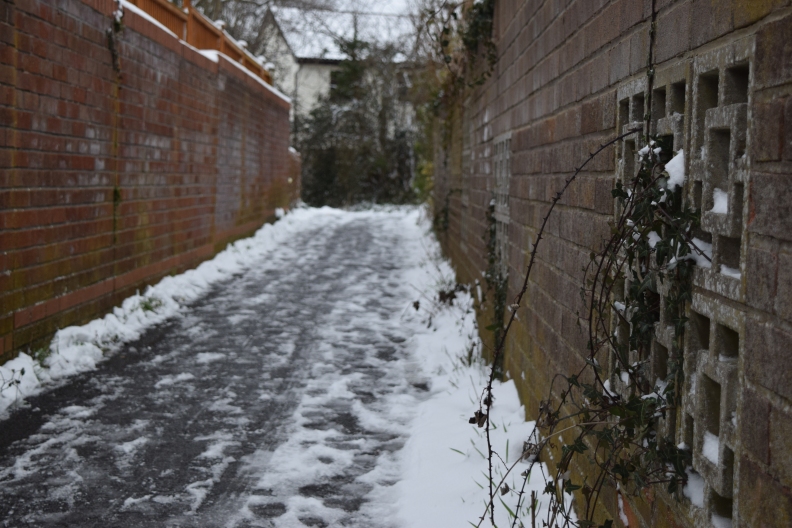 I left the spot of our old hideout and decided to check out the far end of the kid’s park. What I really wanted to photograph was an animal of some kind- a bird or cat- but nothing around me showed even the slightest hint of life. Everything was silent. I passed the part of the fence that you can climb over and into (or out of) the school grounds. When I was 11 my friends and I got caught having a conker war (throwing horse chestnuts at each other) by the angriest staff member in school. Rather than face her wrath we made a snap decision to run away. She couldn’t believe that we would just run away while she was in the middle of screaming at us. She chased us across the field, but we were able to make it to the part of the fence you can climb over, and escaped. 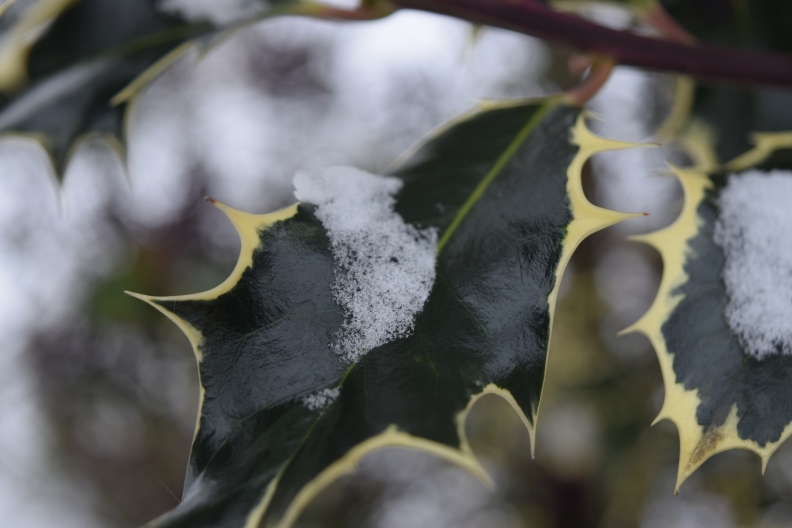 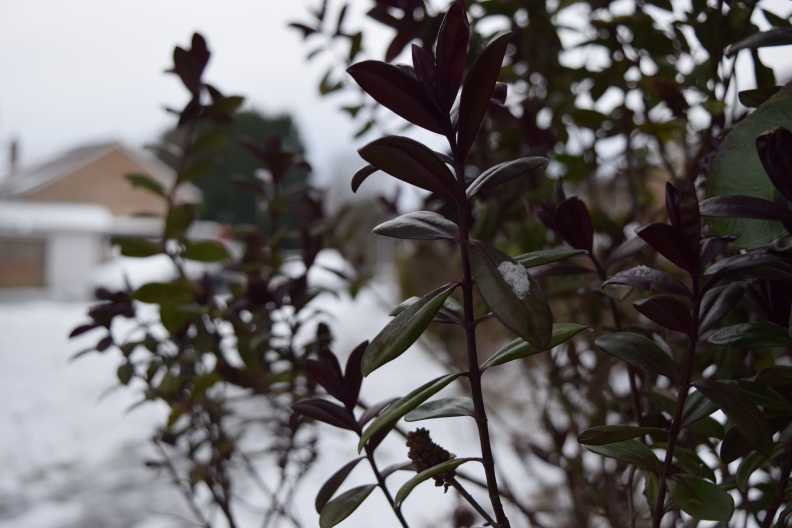 Reflecting on all these memories, I called my friend Artie and told him I was out here at our old hangouts taking pictures. It was freezing cold though, so I told him I would come up and see him, since he lived just a few minutes away. That way my walk in the snow had a sense of direction. I left the school and the park behind; passing the swing set where I got drunk for the first time at the age of 15, the trees we used as goalposts for unending games of football, the spot on the concrete path were the old guy fell over and cracked his head wide open that one time. 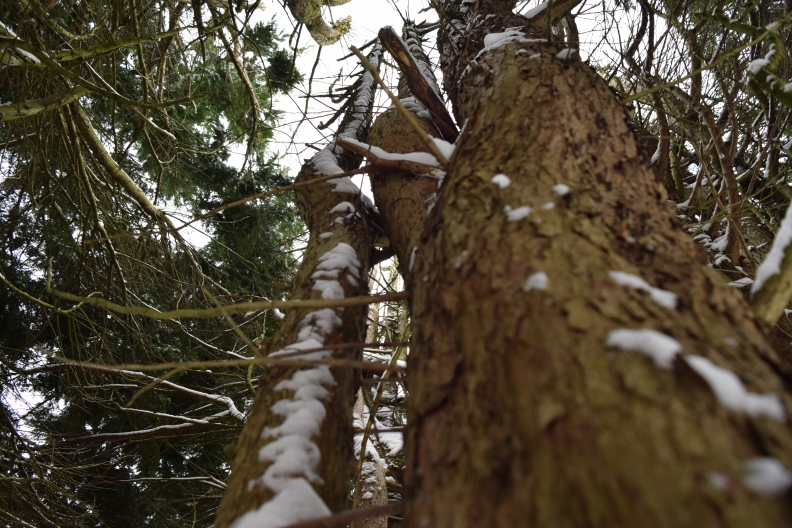 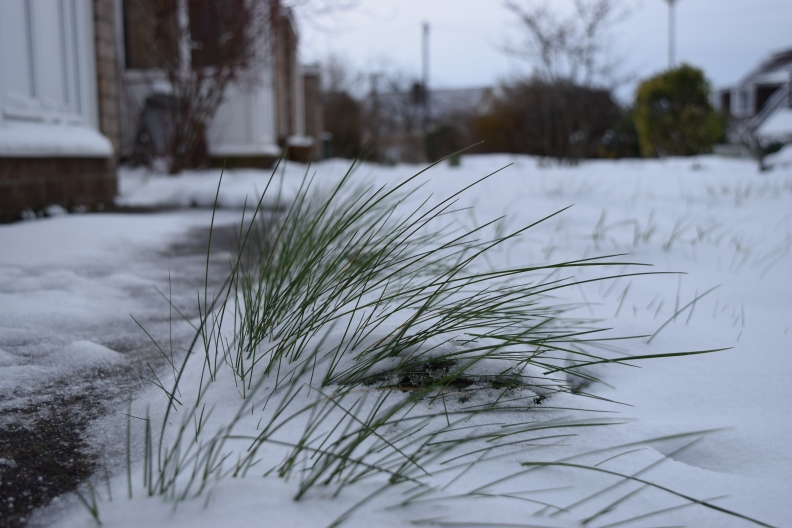 As I started in the direction of Artie’s house, I came upon a huge field covered with snow. At the other end, a guy was walking towards me. A sign of life at last. I said hello and asked if I could take a picture of his dog. I was disappointed not to find a bird in the bushes, but this little pupper would do. It was a West Highland Terrier, the same breed that sunk its teeth into me when I was 14, causing a fear of dogs that lasted several years. Another memory. Once again, it felt like a different life, hard to make sense of. I’m forever asking: Were those my hands? My words? My thoughts? 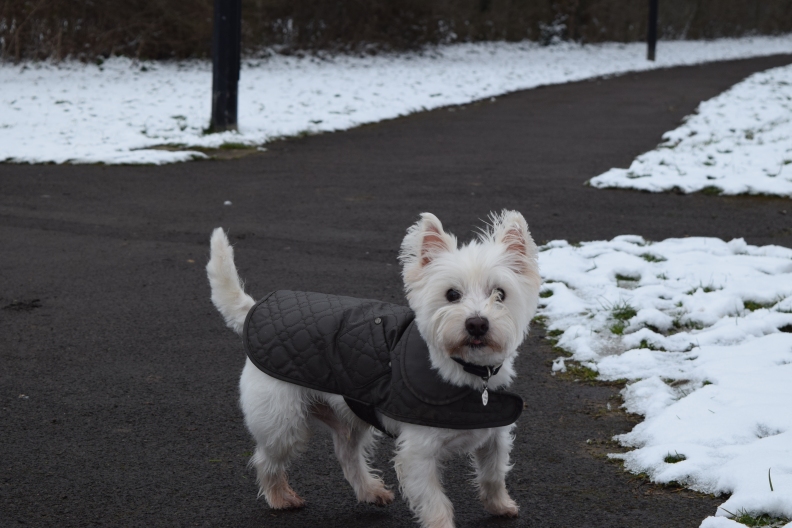 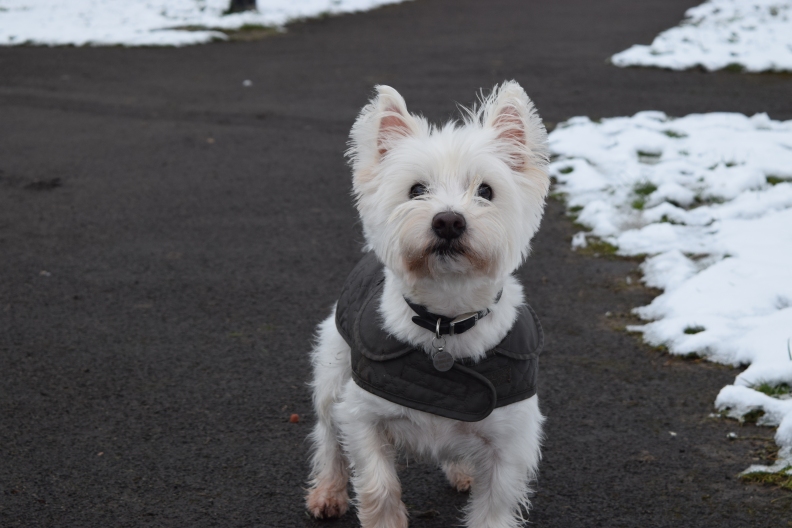