My vision for 2018 is for it to be my most ambitious year yet. 2017 was all about recovery; it was about finding my productivity and finding my happiness. But none of that was planned from the outset. It just sort of happened. And because of that progress, I now hold myself to a higher standard. I figured out that I want to live and do something with my life, and now it’s all about getting to work to achieve what I want.

One of the ways I want to improve my life this year is simply to do more. My problem the past few years has been my tendency to hibernate between my travels to the USA, counting down the days until I get to taste root beer again, until I hear cicadas at night. Now I want to make up for all the time I wasted while I was still in the UK and refusing to get out of bed. I want to fill my life full of vivid experiences. I haven’t got much money, but I have been looking to do small things in my spare time. I don’t want my weekends to slip by in a haze of basketball highlights and potato chips. It’s as simple as just saying “Yes” more often. It’s things like going for a walk with my kid brother Frank before he moves out, traveling to Stamford Bridge to watch Kanté tear it up with my old writing buddy from Winchester, or finally trying out Bingo and Trivia Night at the pub where I work.

Of course, I’m most interested in things that are creative, that light a fire in my soul. So here are three things I’ve seen this year so far, that I consider to be of artistic value: 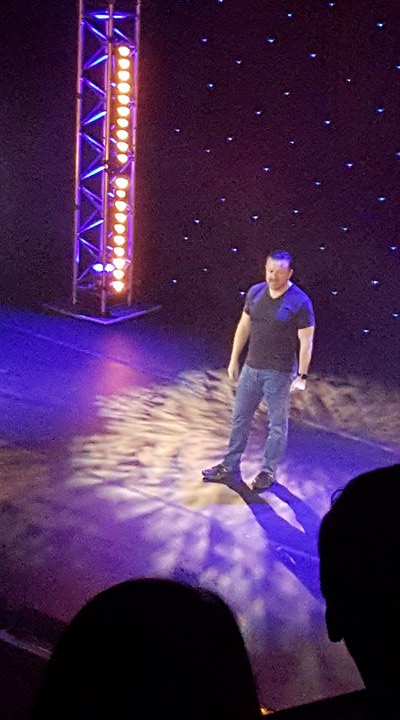 In January I went to the Colston Hall in Bristol- the place where I both sang and danced in three separate shows when I was a kid- to see my first stand up gig. I just couldn’t turn down the chance to see one of my favorite all-time comedians in the flesh. What was great was that Ricky Gervais was in the best form of his life- the quality of his material hadn’t dropped at all since the likes of Animals and Science. I can see how a comedian might not be able to keep up with the times, but Gervais is as sharp and relevant now as he ever was. During Humanity he told stories about celebrities, which to the average person like me, was so interesting, because it was like he acted as bridge between the real world and Hollywood. He’s worked with so many famous people, and yet he comes across as a very down-to-earth guy. It was like he was our man on the inside, sharing the juicy details of the bizarre existence of the famous. I don’t want to spoil any of the material, so go watch this show now (it’s on Netflix!).

About a ten minute drive from where I live is a cinema called The Curzon, in a Victorian seaside town called Clevedon. It’s one of the oldest continually-running movie theaters in the world. They’ve got this old organ from the 1930s and sometimes a fellow in a bow tie comes down to play it before the movie starts. I went to this cinema a few weeks ago to see a Russian movie called Loveless. It was the only night they were showing it, and I really wanted to see the film. I think it’s the first foreign-language movie I have seen in the theater, and maybe the first I’ve seen since my days in Film Studies class at City of Bristol College. The film was beautiful and bleak. It’s all about a kid that goes missing during his parents’ bitter divorce. It’s one of the best films I’ve seen in recent times, and it gives a very cynical portrayal of domestic life in Putin’s Russia. It’s not about Putin or politics per se, but you can feel it ticking in the background. Fleeting glimpses of current affairs, from car radios or TV sets, contribute to a general impression of national sadness. The dialogue in this film was great; the adults rip into one another like Siberian Lynxes. It’s a whole lot of sex, swearing, and darkly-humored nihilism.

Macbeth – Shakespeare at the Tobacco Factory 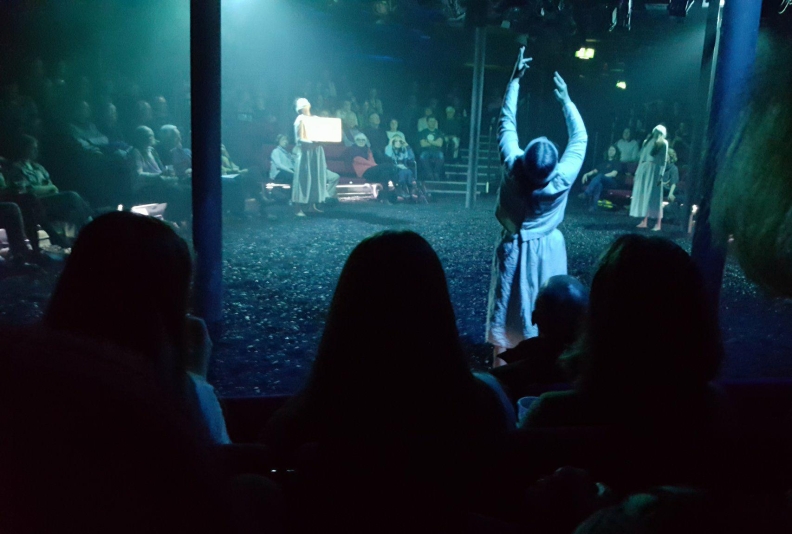 The Tobacco Factory in Bristol is one of our go-to theaters, along with the Old Vic. I try to see Shakespeare as often as I can, and so far I’ve seen about 15 of his plays (almost half!). However until last Thursday, I had never seen Macbeth. I’ve wanted to check out this gory tragedy for years and years, but it just kept eluding me. In 2016 I saw the Michael Fassbender film adaptation with my roommate Aaron, but I loved it so much that it only made me want to see the narrative on stage even more! I got my chance this week and went along with my dad and brother. The Tobacco Factory is a modern theater, but it’s perfect for Shakespeare because the seats are arranged around a small, central stage area. You get to see the actors up close and it gives the plays this real sense of intimacy. I liked this adaptation of Macbeth– the stage floor was covered with a deep layer of blackened wood chips, the sound effects had the diseased, deathly tone of buzzing wasps, and the WW1-inspired costumes were low-key and utilitarian, in a way that contributed to the bleak atmosphere. Best of all were the three witches with their heads wrapped in gauze. It was creepy as fuck. Also, the play featured my favorite stage actor- Simon Armstrong- who I have seen in Bristol dozens of times in everything from Moliere to Chekhov. I also only just realized that he plays Qhorin Halfhand in Game of Thrones (the Night’s Watch ranger that Jon Snow serves under in Season 2!).

One Reply to “What I’ve Been Up To Recently”