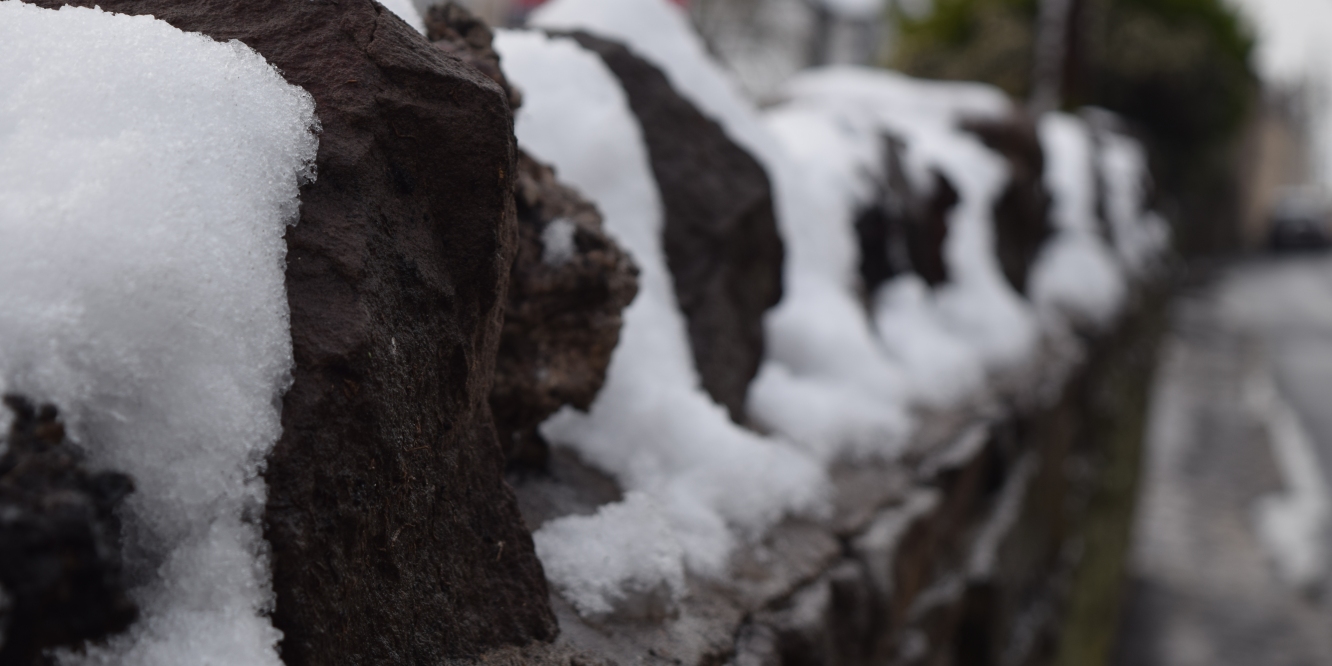 Last year we had an ass-ton of snow one weekend in March and I decided to go outside to take some photos. I couldn’t really walk anywhere picturesque, so I decided to take some wintry shots of the places I grew up. I was feeling kind of nostalgic I guess, because I ended up calling in on my childhood friend Artie and engaging him in a conversation of old memories. A lot of my conversations with Artie take place in the past tense. We’re the kind of people that enjoy telling the same old stories over and over again. When I see him and my other school buddies, I often feel like the youngest version of myself. That’s not to say that Artie and I are trapped in our school days like a pair of McDonald’s All Americans in rocking chairs- I just mean that when I’m around the people I grew up with, I tend to retain parts of myself that I’d otherwise dispense with in other situations. For instance, I’ll make the kind of jokes that appealed to my adolescent self, speaking a lot of gibberish and putting on silly voices. I’ve always found that the past has a stronger pull than I’d like. I often feel the urge to escape it, perhaps just to prove that I can more than anything else. Finding new ways of being myself has the irresistible sensation of conquering the unconquerable- the past. 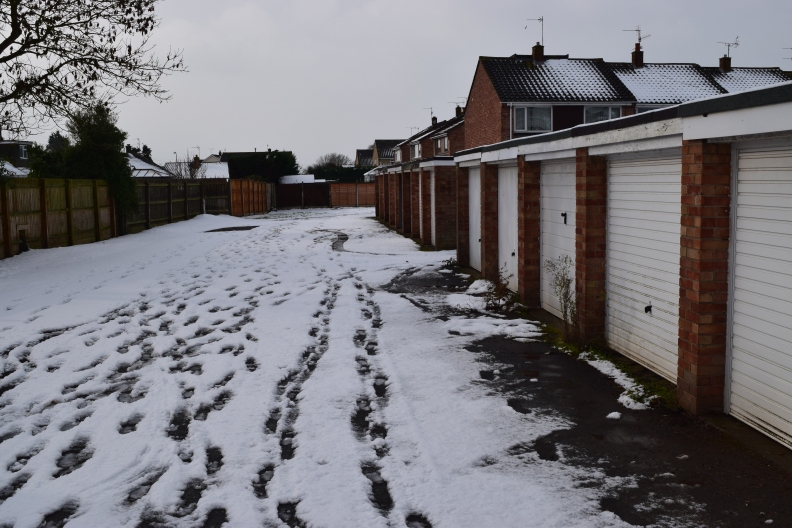 And the past has been looming over me bigger than ever of late. Snow puts me in a reflective mood, even though it almost never happens in the town in which I live. Last Friday, on the first day of February, snow fell on our little town again. It put me in mind of last year’s snow day, and so once more I resolved to go out and make use of this novelty with my dSLR in hand. This time however, I had an agreement to meet some folks at the pub where I work. I didn’t want to photograph the same neighborhoods I did on last year’s snow day, so I took the extra-long route, zig-zagging across town and taking my time with things that interested me.

I also tried to think about the things I looked at. When I got to work on last year’s Snow Day post, I realized that I didn’t like the idea of uploading my photos without some words to accompany them. A blog post feels kind of naked without text. So I decided to intersperse the pictures with random stories from my childhood. The post felt a little too messy for my liking and I wasn’t sure it was my best work. I decided to forget about it. And yet, despite my dissatisfaction with the post, it turned out to be one of the most popular pieces of content I published last year. I figured the spike in traffic directed toward my website either had to be from former classmates curious to see if I’d slagged them off, or misguided foreigners hoping for National Geographic-esque stills of a rustic idyll. 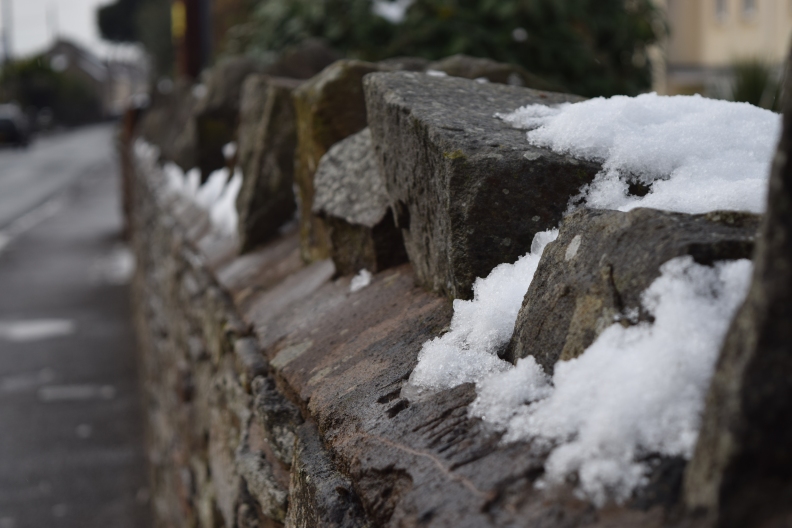 I’m afraid you’ll be disappointed on both accounts if that’s why y’all are here for round two. Nailsea is no chocolate box. Which is not to say that my hometown is especially ugly or anything, but it’s not a community that’s developed with a sense of touristic charm in mind. For the most part it’s functional rather than aesthetic, having been established around the industries of coal mining and glass manufacture. Now it exists as a sort of de facto suburb for commuters to the city. I imagine that it’s one of thousands of such quiet communities across the U.K, where little much of note happens except the odd headline regarding sleeping cows getting tipped over by dastardly youths or beige-cardiganed OAP’s farting themselves to death while reading Gardener’s World. But in a way I feel like these towns are more real than the likes of Polperro and Lyme Regis, which have always seemed like fantasies to me. 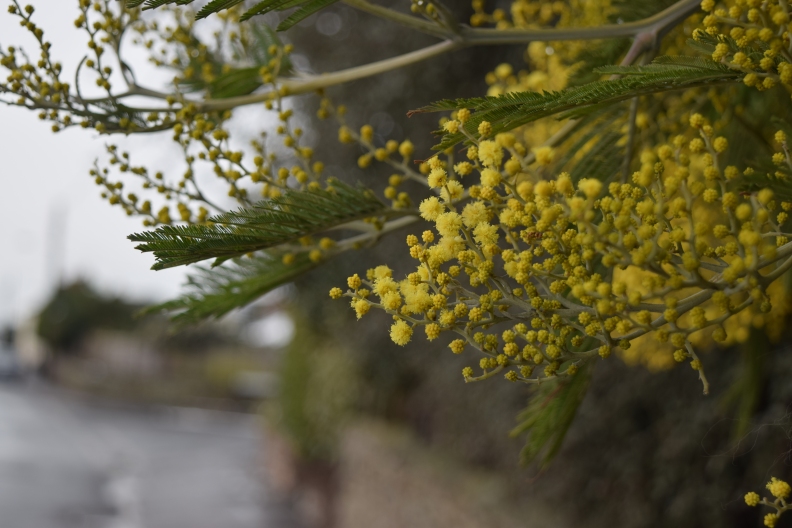 As I went in search of inspiration last Friday, I ended up thinking about my own feelings toward my hometown. During my adolescence I developed a real hatred for it. It’s only fairly recently in my life that this deep-seated loathing towards Nailsea has subsided. Growing up, I attached a lot of the problems I had in my life to the environment I was in. I hated my hometown because it reminded me of everything I wanted to forget. For the longest time I saw it as a cage that reinforced my own failures in life. I dwelled so much on my experiences of being bullied, my romantic shortcomings, and my general sense of not belonging, that I believed wholeheartedly that I couldn’t flourish here. So I traveled. Other places seemed marvelous to me, because with them came the idea that I could be whomever I wanted. Other places were fantasies to me. As soon as I was 16 I vowed to leave Nailsea and never come back. Nailsea was the past, and as I said earlier, I wanted conquer it. I wanted to completely expunge it from my memory and create a life with no trace to the community in which I was raised. But you can’t ever really defeat the past. 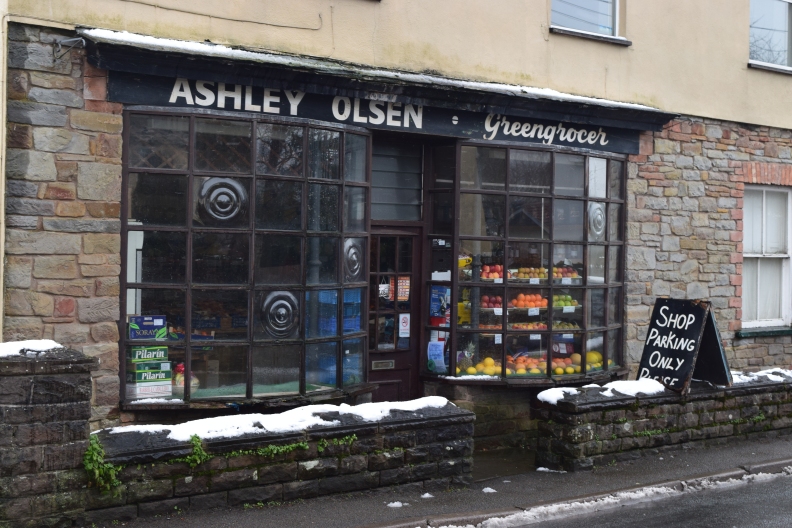 First I went to college in the nearby city of Bristol for two years. That in itself was interesting, because I found myself in an urban environment for the first time. It was bustling, cosmopolitan, and multicultural. I tried out new styles of clothing, often opting for the things that looked as different as possible from what everyone back home wore. I tried new types of music. I plunged headfirst into new ideas, reading from old philosophers, watching foreign films, going to the theatre on a semi-regular basis. But I still wasn’t happy. In fact, I was deeply unhappy during my time at City of Bristol College. I spent every break I had hiding in the library listening to my iPod and eating lunch in the bathrooms so that I wouldn’t be seen eating alone. Bristol, I decided, just wasn’t far enough. 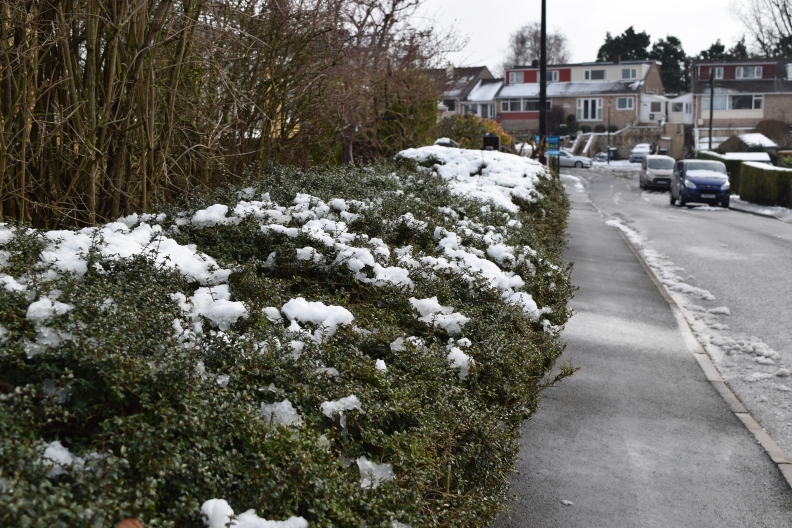 At the age of 18 I moved to Winchester, which is about two hours away from here to the south-east. This had to be my time, I thought to myself. I’m in a new place studying something I’m passionate about, surrounded presumably by more likeminded people. Perhaps I was just unlucky. Perhaps I was just born in the wrong place. But as it turned out, I was even less happy in Winchester. What I was sure would be the time of my life ended up being some of the worst years I had experienced yet. It was during this period of my life that I started to think something might be seriously wrong with me. I had grown even more reclusive and isolated than I had been in Nailsea or Bristol. Winchester, I decided, just wasn’t far enough. 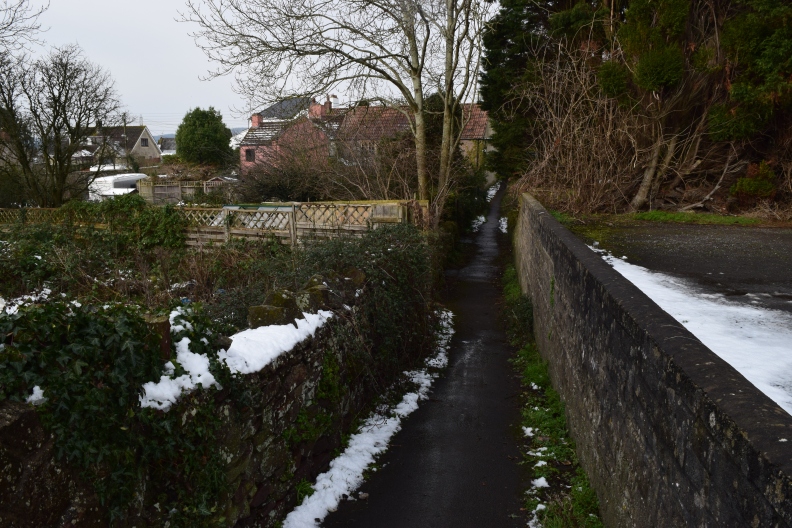 So I hopped on a plane and moved 4000 miles to the USA, in Making a Murderer’s very own creepy pine forest Wisconsin. I loved it. I loved it so much that I’ve gone back to the US for the past 5 years in a row. But I learned a few things while I was out there. As much as I enjoyed my time in this new place, I found that it was largely down to the specific friends I made- Aaron and Anne-Marie. I also learned that my problems were too deep-seated to be fixed by a change in environment. I learned that I ought to have been looking inward, instead of far away. Sure, it sucked the first time I came home from living in the USA, but that’s no different to going somewhere nice on vacation and having to return to the hum-drum of normal life. Everyone can relate to that. It was only when I started going to the US every year (and got the medicinal therapy I needed) that I let go of my hatred for Nailsea. 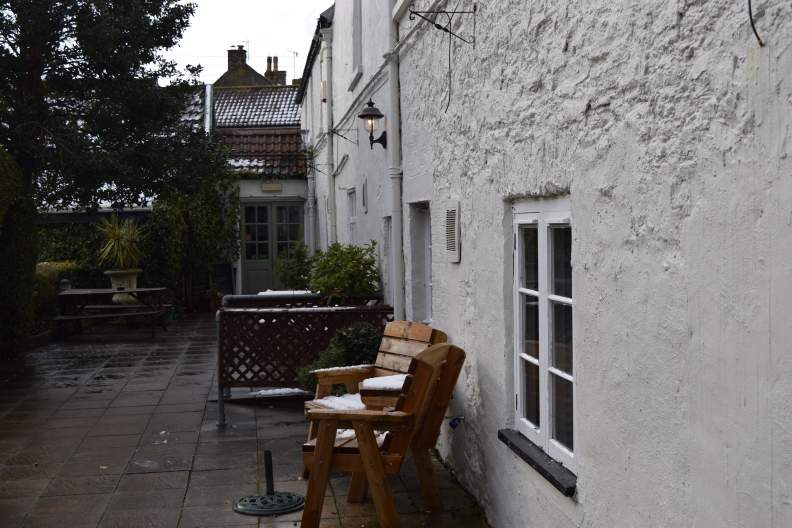 Now I don’t really feel anything toward it. It makes no sense to imbue the physical streets with the shades of memories good or bad. I’ve separated my memories and feelings from the town itself. As I trundled through the snow last Friday, I felt kind of numb to everything. Now it’s just a place, and I think nothing of it for better or worse. In fact, in recent years I’ve even been surprised at the ease with which I walk around town now. I go out more often and talk with more people than I used to. 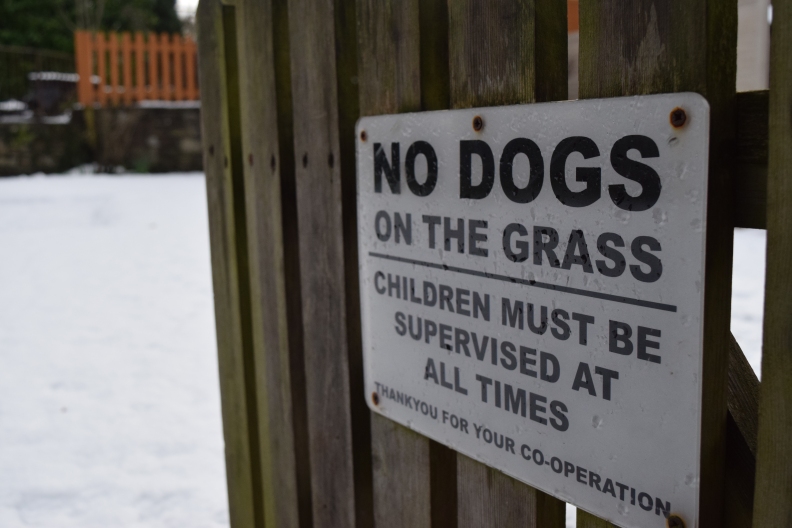 I’d left the house too late on Friday to capture the snow at its brightest and puffiest. Now the midday sun was melting it into gray slosh. Everything was wet and disgusting, but I decided to keep taking photos anyway, because the imperfection of these muddy remnants reminded me of the imperfection of real life. And Nailsea is nothing if not thoroughly real. 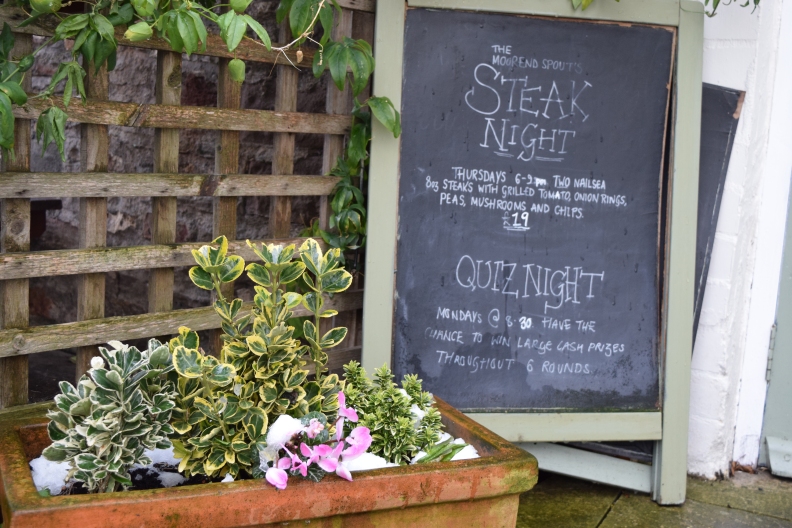 I passed a grocery store that operates out of an old house that seems more akin to a Victorian toyshop. I’ve never been in there, although I have a vague memory of sitting in the car outside and staring through the windows as my mom went in to buy something. I passed the hill that leads to my old house where I used to ride my bike and feel a mixture of fear and excitement at the gradient. I passed the fish and chip shop we’d sometimes stop at growing up, where I’d always feel a pleasure at the heat of the food through the paper in which it was wrapped. It felt like a present waiting to be unwrapped. I passed the road on which my childhood nemesis used to live- a support teacher I routinely clashed with and who once said I lacked any empathy. I was a hyperactive little shit that just couldn’t sit still back in those days, a fact that often surprises those of my friends so accustomed to the docile creature I’ve grown into. 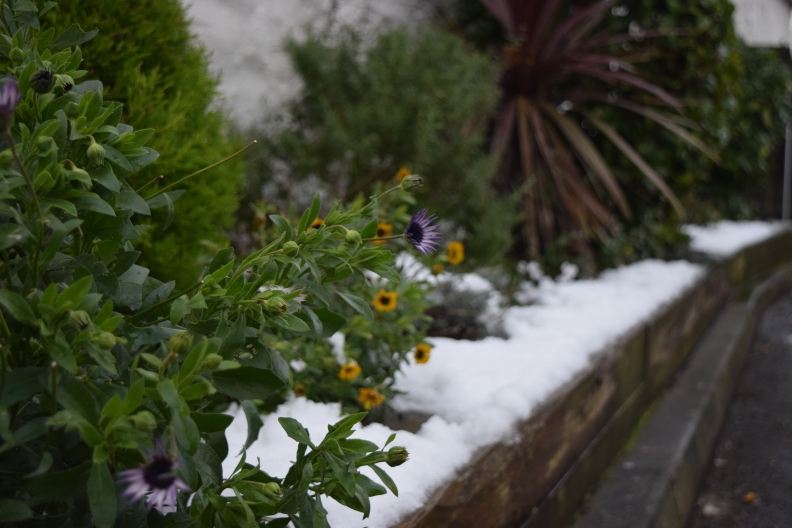 I finished my little walk in the snow at the pub where I now work. It’s a nice place and I feel pretty comfortable there. One of the best things about working in a kitchen is all the free food you get given. Whenever the chefs make too much, I’m often treated to spare chips or something. One time they made too much garlic bread, and I got treated to a couple slices. It was glorious.

Anyway, that’s all I’ve got for this year’s Snow Day post. Maybe it’ll snow again next year and I can make it a trilogy!