El Wapo is an old, 13-feet-long Louisiana alligator with a fondness for eating other alligators. It’s precisely this habit- and his talent for crushing skulls- that’s cost him approximately 3000 teeth during his lifetime. When he smiled at me, I noticed half his teeth were missing. Don’t worry though- he’s managing just fine with those he has left. I got to meet him on August 4th, the second day of my trip to the Big Easy. 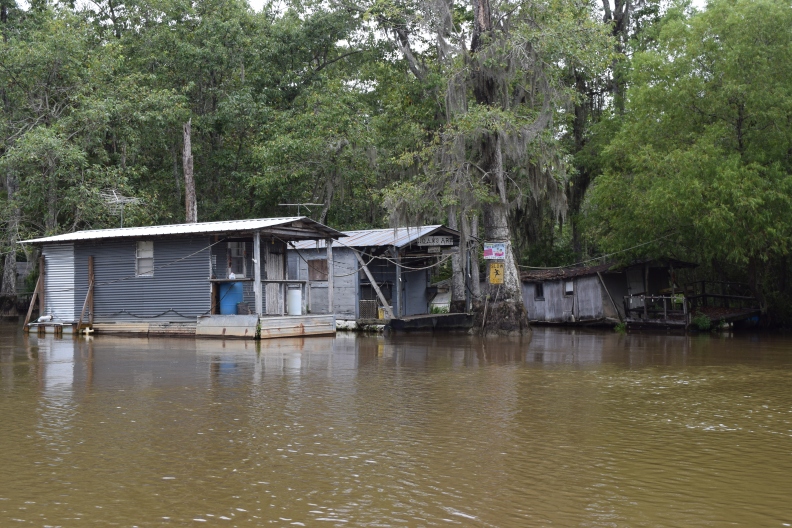 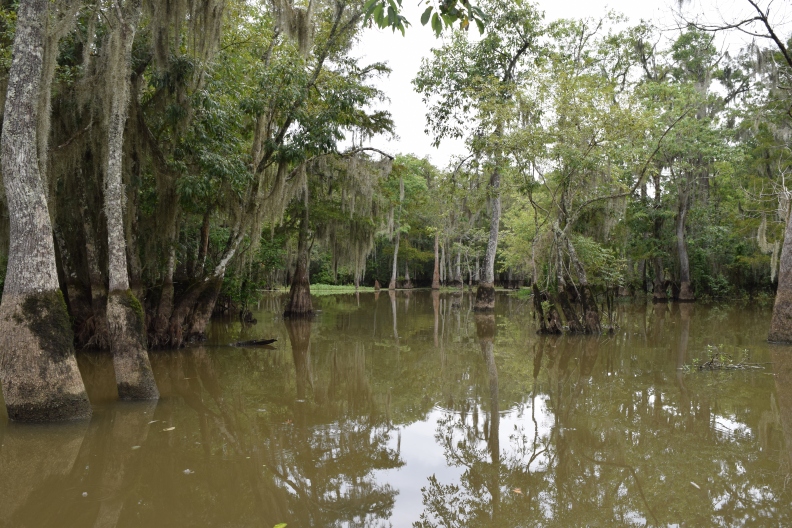 I was ecstatic to get the chance to see some real Louisiana swamps during my stay. I also felt like this was a chance for me to see Louisiana- the state- since neither it nor New Orleans are reflective of the other. The culture of this brilliant, slowly-sinking city, this bluesy, French-inflected, occultic Atlantis is far too distinctive to expand beyond its leveed borders. I wanted to see Lafayette- the municipal heart of Cajun culture, as well as Baton Rouge- the rowdy college town, home of the Tigers- in order to experience what I figured was the real Louisiana (the same way I wouldn’t expect a visit to NYC to teach me anything about life in Syracuse or Ithaca). My mouth watered at the idea of seeing even smaller cities like Grand Isle and Natchitoches. But an American road trip is difficult without a car, especially when you’ve got a wedding to attend at the end of it. So all that would have to be put on hold, for the purposes of maintaining both my financial security and my sanity. What wasn’t denied to me however was the very thing I coveted most about the Pelican State- the majesty of its famous wetlands. 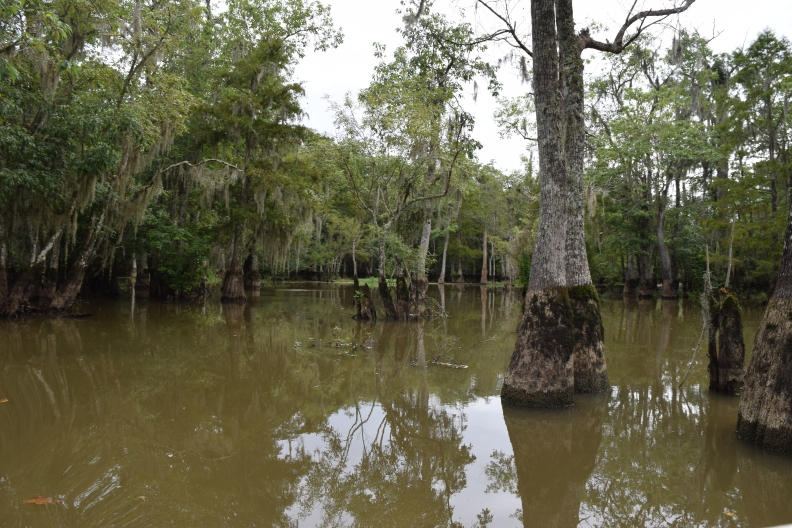 There are a number of swamp tours that will pick you up from your hotel in New Orleans, especially if you are staying in the French Quarter. Most are about 2 hours long, and when you factor in travel time, the entire experience usually amounts to about 4 hours, which allows you to spend the rest of the day doing other stuff. The tour that popped up the most in my research was the Honey Island Swamp Tour, which operates out of a bayou east of New Orleans, in a town called Slidell. During the ride there in the air-conditioned shuttle bus, the driver told us stories and trivia about the things we passed by. Charity Hospital is a landmark one doesn’t soon forget. After we exited the Quarter, crossing Canal St and entering Downtown, we fell under the shadow of a gargantuan abandoned hospital. The driver told us that Charity had been devastated during Katrina, and with the power gone, the sweltering patients tried to escape to the roof of the building in the hope of helicopter rescue. She said that there were reports of gunfire aimed at some of the helicopters, which I thought was particularly bizarre. The only word to describe the place is haunting; it looks like something from The Walking Dead. It’s strange that after all these years Charity still hasn’t been rebuilt, but then that could be said of many of the city’s post-Katrina ruins. 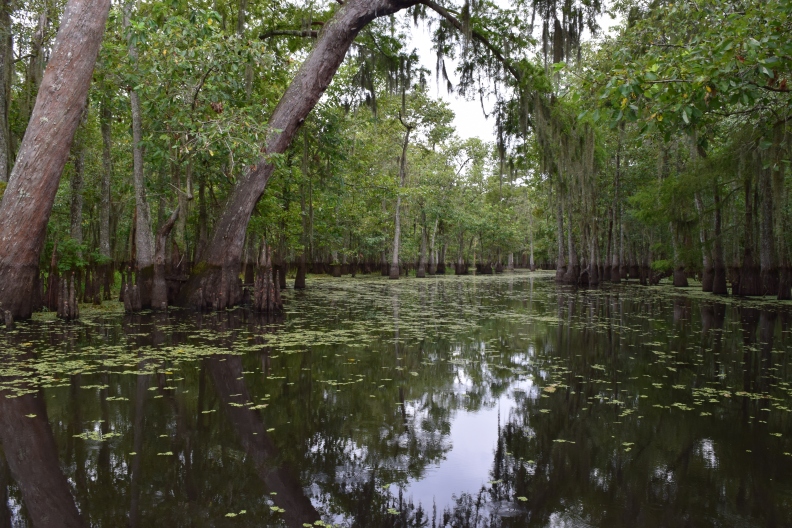 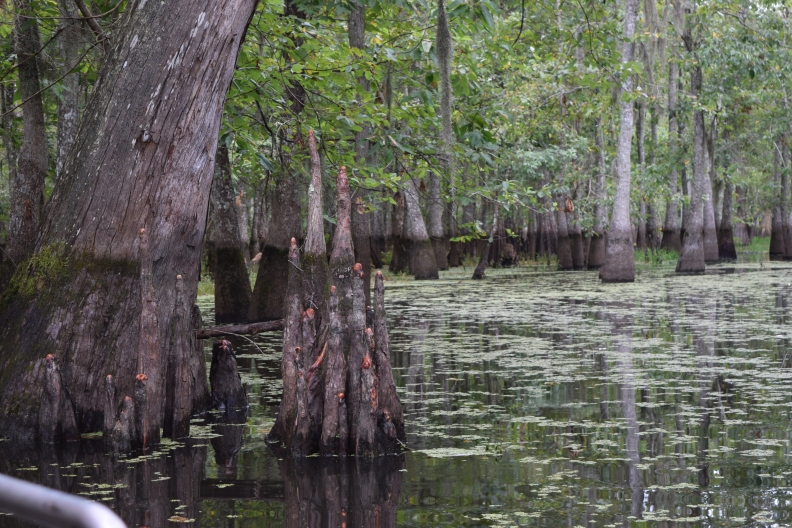 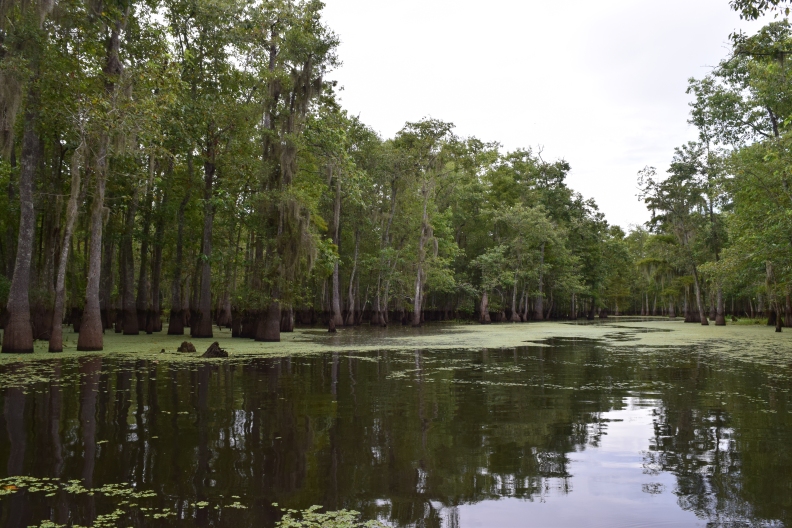 We drove east, past the famous St Louis graveyards and into Tremé. The driver said that when she was a girl, her father always said that an axe had to be kept in the attic. She said she only understood why when Katrina hit, and many of the district’s residents had to axe through the attic and escape onto the roof so that they didn’t drown. We left Tremé and passed through New Orleans East, which supposedly suffered the worst of the hurricane’s assault. Many of the residents simply didn’t return after evacuating, and those that did didn’t stay long. Today the town is a shell of its former self; we drove past miles of swampland which the driver told us used to be rows of houses. Nature has reclaimed a lot of the eastern part of the city, and those few who remained found themselves without many of the amenities once available to them. Businesses moved elsewhere and construction projects were abandoned. A lot of the children living in New Orleans East today have to get the bus to other towns for school. We passed an abandoned amusement park that never opened, the roller coaster tracks towering over the swamp like a ruinous Mayan temple. 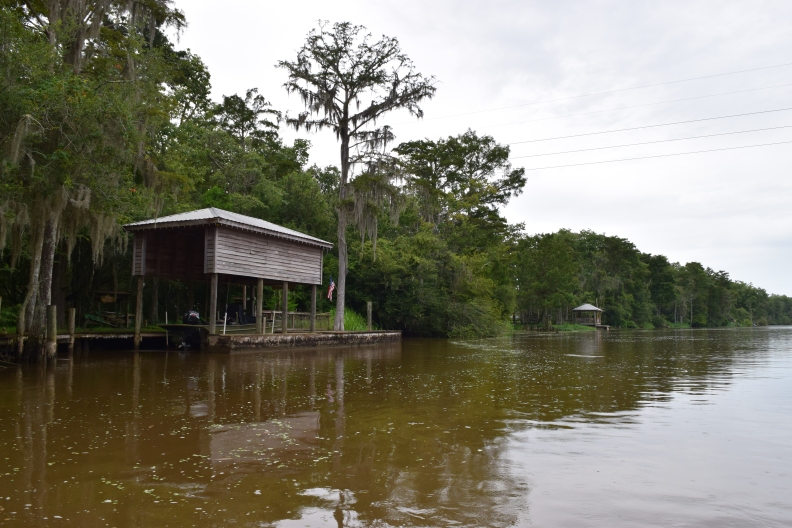 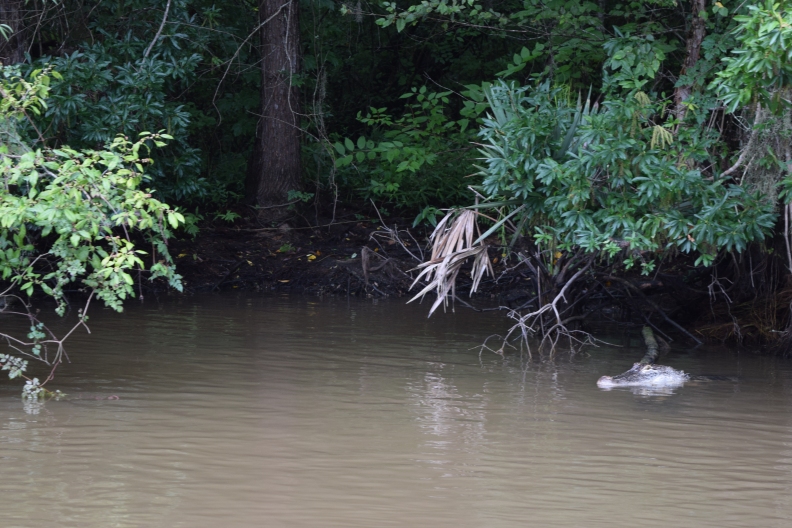 “They were gonna build a Disneyworld or something out here,” the driver told us, but gave up on the project. However, a lot of Hollywood movies use the abandoned amusement park- including Jurassic World, who shot scenes there for the sequence with the pterosaurs in the domed aviary. I thought that was pretty cool.

Eventually we reached the town of Slidell, which, we were told, had boomed in the wake of Katrina. What was once a small country town was now a thriving urban metropolis, with many of the residents of New Orleans East having relocated there. As we drove through the streets we got to see a real Daiquiri Drive-Thru (a Louisiana staple) as well as a dozen personalized Pelican statues outside of businesses that donated to local charities. We left the town along the quiet backroads, passing several country shacks proudly displaying the Confederate flag on their lawns and in their windows- as though daring someone to take issue with it, it seemed- and entered the bayou. 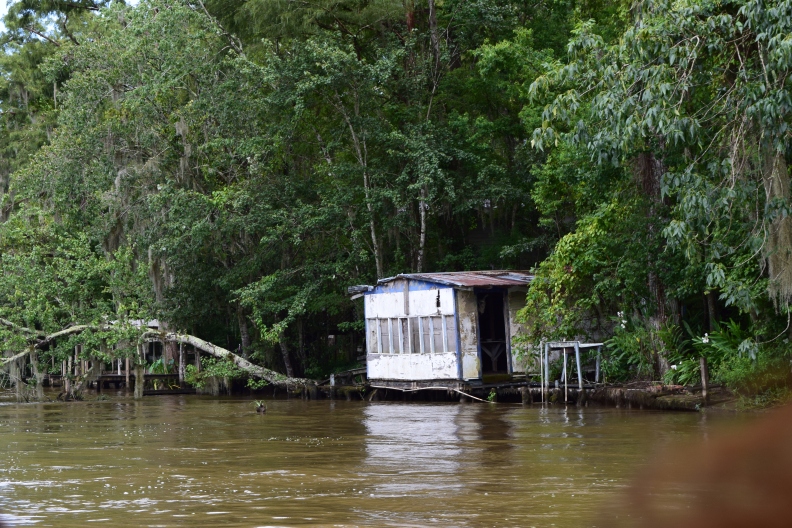 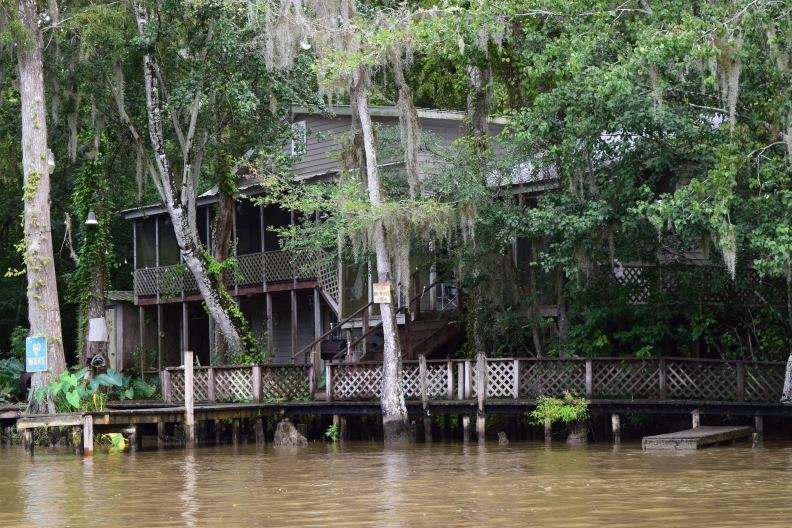 By the time the tour started it had stopped raining. I wondered if a swamp tour would be like whale watching, where you’d be lucky if your hard-earneds got you half an inch of dorsal fin. I guess I assumed that all animals are naturally cautious of loud motorized vehicles, and have better things to do with their Saturday afternoons than perform tricks for boats of screaming primates armed with selfie-sticks, but I was wrong. We were barely ten minutes into the tour when the gators started emerging from their bald cypress grottoes like haughty divas along a catwalk. In total we saw 14 gators that day, although two of them were the capsized victims of cannibalism. The tour guide attracted the gators with marshmallows, and it was incredible to see the wild creatures up close. Like the residents of the Big Easy, these animals aren’t shy whatsoever. If anything they came across as desperate, attention-seeking whores. So I encourage anyone who ever finds themselves in Louisiana to book a swamp tour, because you very reliably get your money’s worth.

The tour guide was hilarious as well. When the little girl from Mississippi asked him if the gators ate humans, he responded “Only little girls that don’t clean their bedroom.” 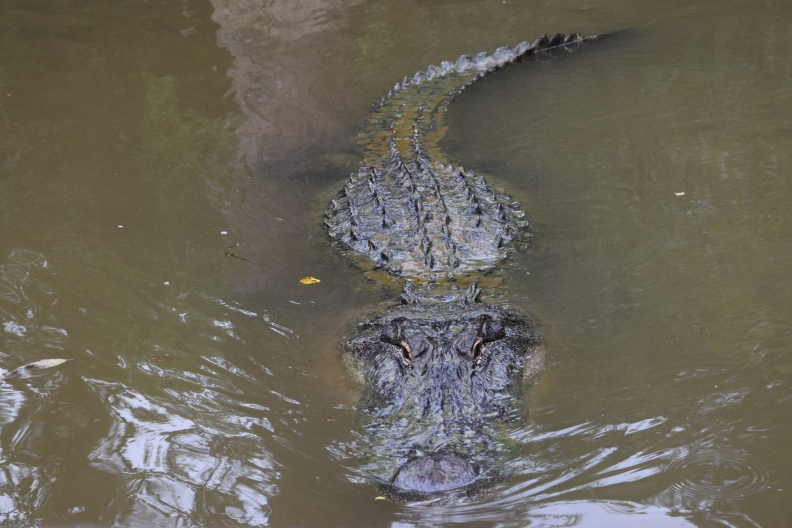 Once we reached the deepest, darkest part of the bayou, the guide announced that we had entered El Wapo’s Man-Cave. El Wapo is the undisputed king of this particular bayou- nothing happens without his consent, and not a creature draws breath unless he allows it. The tour guide lovingly petted him on the snout, before we bid the Caesar farewell. A young female alligator came along, attracted by the scent of the marshmallows we had humbly offered as tribute to the king, and the guide said “Yeah…he’s probably gonna eat her later…” 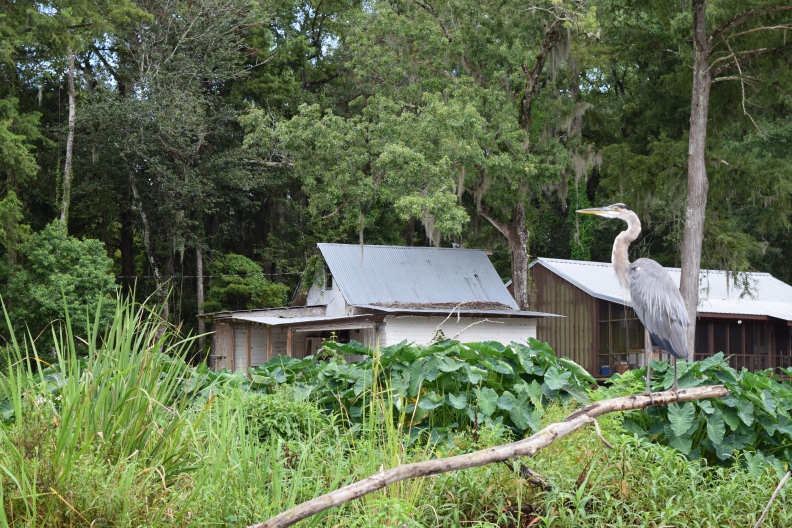 We also saw some raccoons, a bunch of wild rice, and a blue heron- which the guide informed us was the “most vicious predator” in the whole swamp. Before the tour ended we passed by several Cajun houseboats and fishing shacks- people whose houses were inaccessible by any means other than water. They had to get a boat to a dock just to get their mail. It was fascinating. Their entire livelihoods were reliant on the swamp and the creatures they shared it with. A few of these “swamp-folks” waved at us from their front porches. Closer to where the tour started we saw some richer houses on the banks of the swamp, whose trimmed lawns were outfitted with covered swimming pools to keep out the gators that wandered freely over their land from time to time. 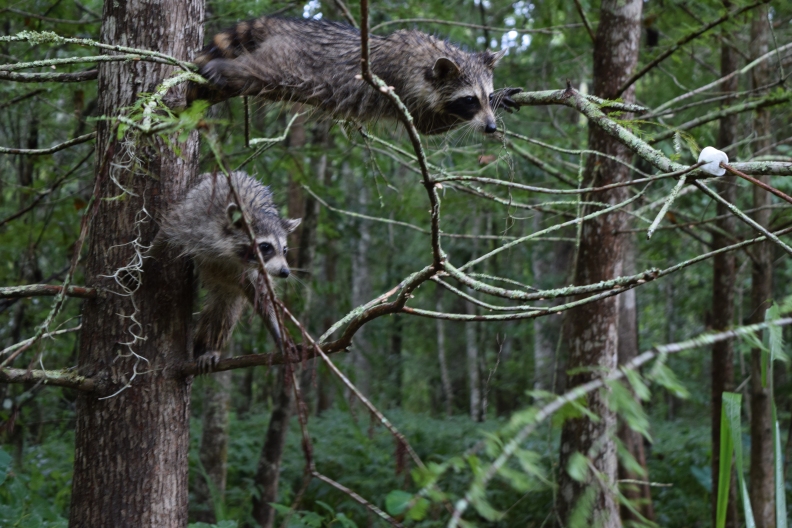 “And here,” the guide said, as we approached the dock of such a property, “we have the most foul and contemptable beast in the entire swamp…the Bama fan.”

We saw then that the deck chairs were painted with the logo of the Crimson Tide. The guide muttered something about them destroying the ecosystem and we all had a good laugh.