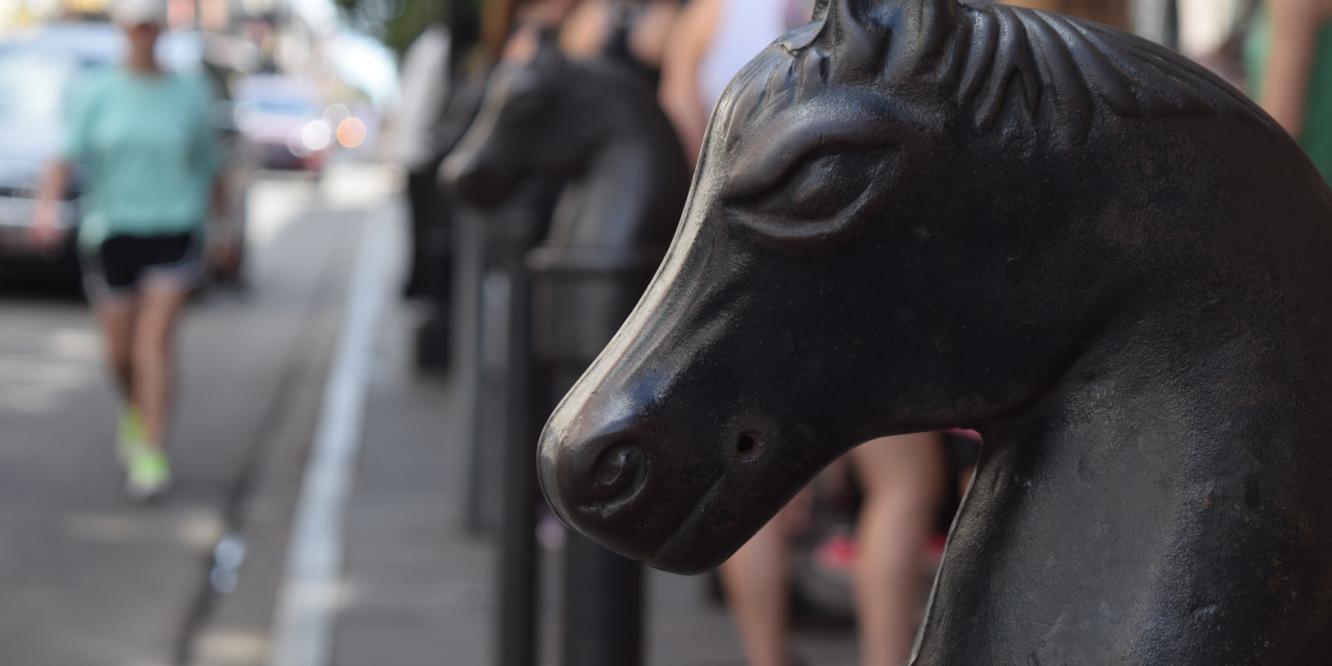 As I stated in my previous post, I was anxious not to waste any time in this city overflowing with creative inspiration. When traveling solo- especially staying in a city for five days- you have to make your own fun. Even in a place as rich and exciting as New Orleans- you have to investigate what’s on offer and do a little research about how best to spend your time there.

I woke on my second day in the Big Easy from a peaceful sleep undisturbed by Bourbon Street belchers, Halloweeny pranksters, or glass-shattering Creole orgasms. Saturday, August 4th. The only day of my trip I had anything booked. A swamp tour in the afternoon and some raunchy nightlife entertainment in the evening. However, the spaces in between these engagements grew suddenly large in my mind.

I had time to fill, and I sure as heck wasn’t gonna spend it in my hotel room chipping away at the “Sith Triumvirate Raid” on Star Wars: Galaxy of Heroes. My tour didn’t start until noon, and with three hours to kill I decided to go for a walk. I had heard that the 19th century Creole mansions of Esplanade Avenue were a hidden treasure. I set off with my camera, relishing the opportunity to photograph this scenic, quiet part of the city. 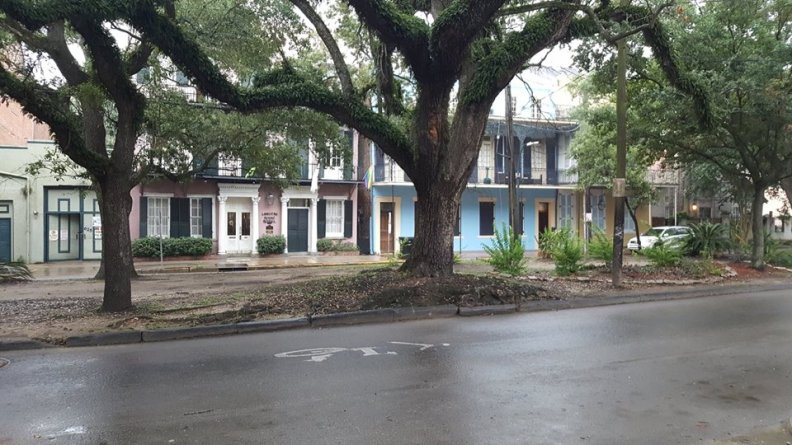 I’d barely walked three blocks however, when it started raining. And when it rains in the Big Easy, oh boy does it pour. I placed my camera back in my bag and continued walking. I reached Esplanade and caught a glimpse of the colorful mansions through the steel threads that poured from the sky. It wasn’t what I had planned. I love rain for its ambience and its poetry, but this time I was bummed out. What a lousy morning, I said to myself. I kept going down the deserted street, maintaining a watchful eye on the truck that had slowly driven past me twice, my mind recalling all sorts of sinister things from my days binge-watching Crime Investigation Australia. 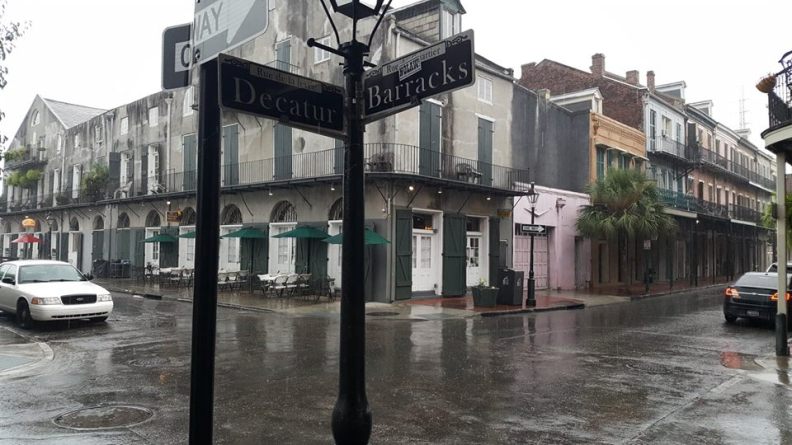 I turned right on Decatur Street and headed back into the Quarter. I was looking for a place called Crescent Park, and at the time I wasn’t sure where I was in relation to the Mississippi River. Hopefully when I reached this green place the rain will have stopped and I could have some photographs to show for my excursion. The rain didn’t let up, however. If anything, it only got more furious. I stood for a while on a street corner, under shelter, reviewing my map. The edges of the roads were beginning to flood, and the rain was so violent that every pedestrian stopped walking and took shelter. It was like Antony Hopkins had told us to “freeze all motor functions” while he tried to fix this rain glitch in our simulation. The proprietors of the stores we stood outside- a mix of souvenir shopkeepers and Italian bakers- came out to join us, standing with hands on hips.

My eye caught sight of a café across the road and I made a snap decision to sit down and have a drink while I waited for the rain to die down. I think it was called The Market Café. It had an outdoor patio that was covered. People sat eating brunch at bistro tables while a live Jazz band attempted to drown out the thumping of the rain. A waiter smiled at me as I approached. He sat me down at one of the tables and asked what I wanted.

This is one of those situations where I ought to be less self-conscious and more assertive. I’ve been told I care too much what people think, and that I should stop apologizing for myself everywhere I go. I asked the waiter if I could just sit here and have a drink. His expression instantly became hostile and he stared at me. I asked if that was okay.

“It’s a restaurant,” he said, like I was stupid. He frowned at me as if I had insulted him.

“It’s raining,” he said. And then, through gritted teeth, “What do you want to drink?”

I got a Coke. When he brought it to me, I smiled at him and said thanks- a peace offering to make up for my awkwardness. Still wearing his angry expression, he ignored me and placed the cola on my table without a word. I got out my map and checked how far I was from the park. City parks are good for solo travelers. City parks, botanical gardens, museums, and art galleries are the solo traveler’s best friends; they offer a sanctuary free from social pressure and expectation. They are places of contemplation and self-reflection, which is what traveling solo is all about. They are the opposite of amusement parks, which I think would be kind of depressing to attend unaccompanied. After paying for my thankless business, I braved the deluge again and set off north.

Eventually, I found the perfect solution to my current situation and the thing that made this whole walk not feel like such a waste of fucking time- a covered flea market. I’d heard about this place before. French Market. It spans six blocks, and it’s the oldest market of its kind in the United States. In fact, it predates even the arrival of the European settlers, the site having been used as a Native American trading post centuries ago. 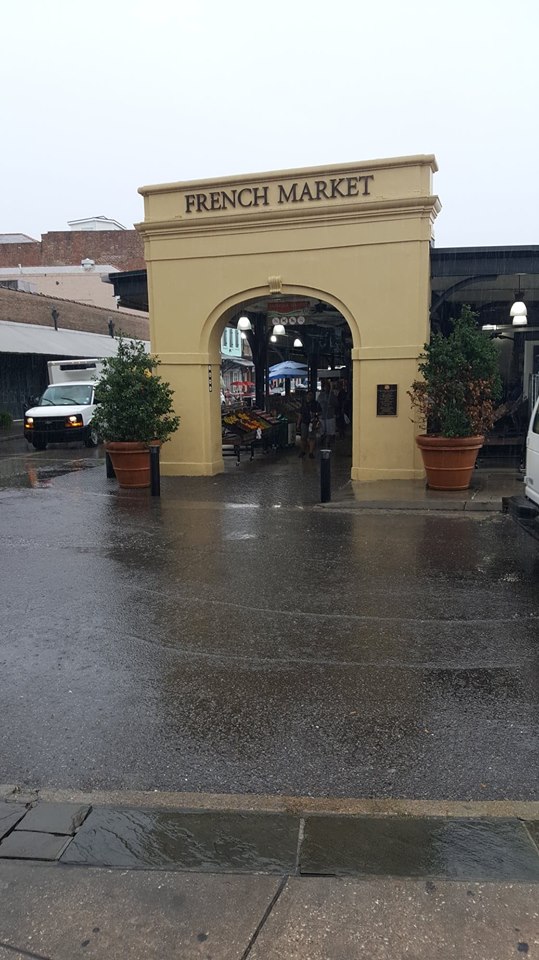 I love flea markets. I passed several vendors selling traditional Cajun dishes- if you’re hankering for a hushpuppy, a basket of gator bites, or perhaps some fresh crawfish, this is the spot for you. I took a seat on one of the stools and asked for some fried green tomatoes. I wasn’t hungry enough yet for lunch, and I had always wanted to try this Alabaman specialty. I figured it was a rite of passage for my journey into American regional foods. 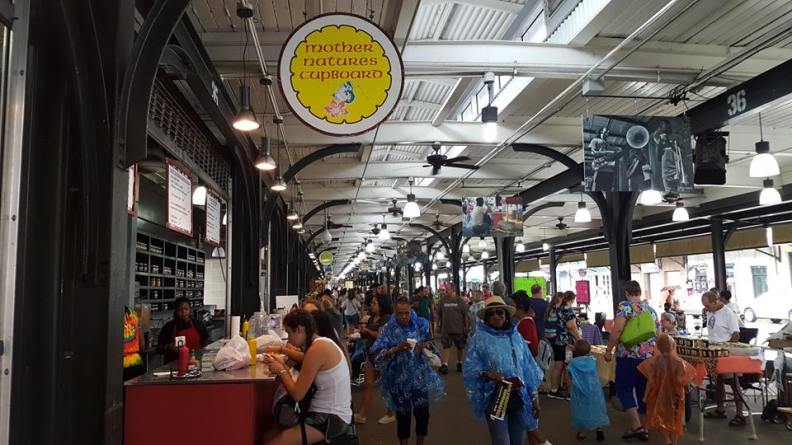 To be honest, I didn’t really care for them. They’re just deep fried tomatoes with none of the sweetness that comes with the red variety I’m more familiar with. I made an effort to finish them, saying to myself: for the blog, Michael. For the blog. 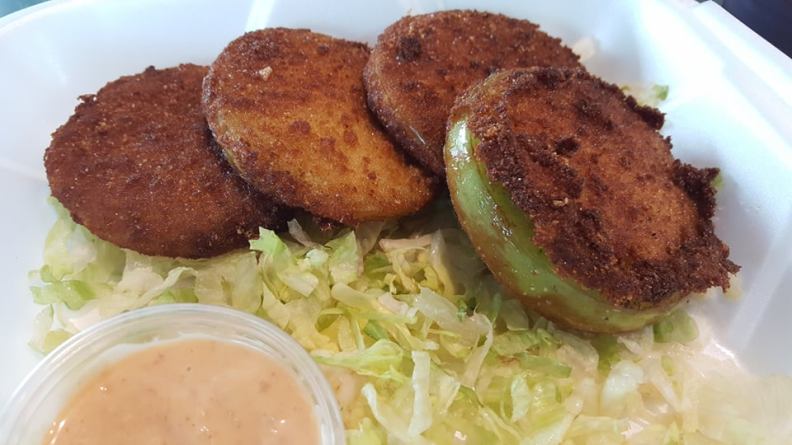 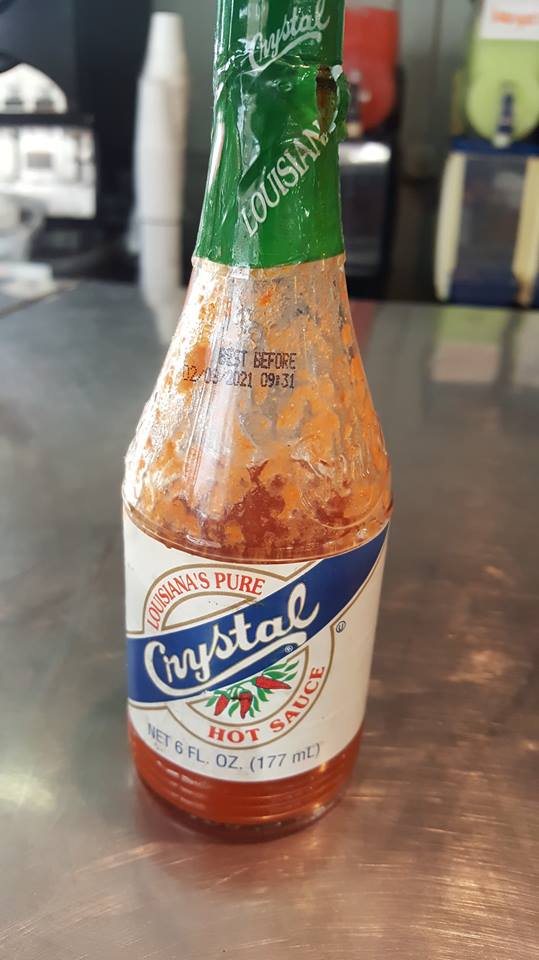 I continued to wander north throughout the market. There were all kinds of handcrafted trinkets and goods. And a lot of interesting jewelry and other crafts. I don’t wear jewelry myself, but I’m fascinated by gemstones. There’s just something so incomparably wondrous about the rapture of staring into a sapphire, ruby, or emerald. I stopped to admire a collection of bracelets and necklaces. I decided to get one as a graduation present for the woman I call my sister- Anne-Marie- who had just recently gotten her Masters in Behavior Analysis. Not only had she graduated from the top school in the nation for that field, but she was also now a published author, having submitted an article to one of the most prestigious academic journals in said field. Anne-Marie conducts groundbreaking research into human behavior (with a specific focus on children with autism) and teachers and parents travel to watch her speak and learn from her breakthroughs. It’s very exciting stuff, and I figured she might like something nice to accessorize with during the many speeches and conferences that surely await her in the future. The bracelet I picked out was lined with rich blue gemstones, and it’s one of the colors she wears well. It’s a color I associate with her; it’s kind and warm but there’s also an oceanic depth to it that connotes knowledge and wisdom. 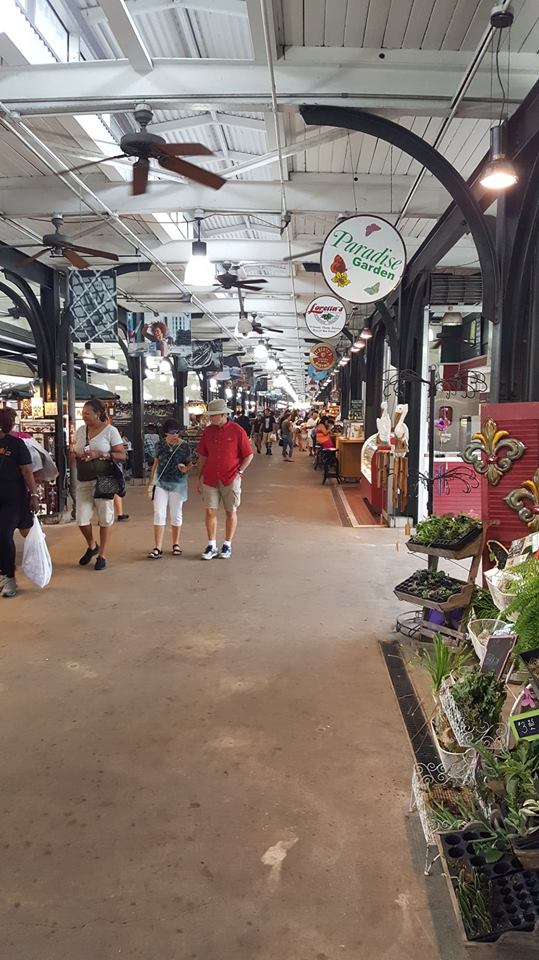 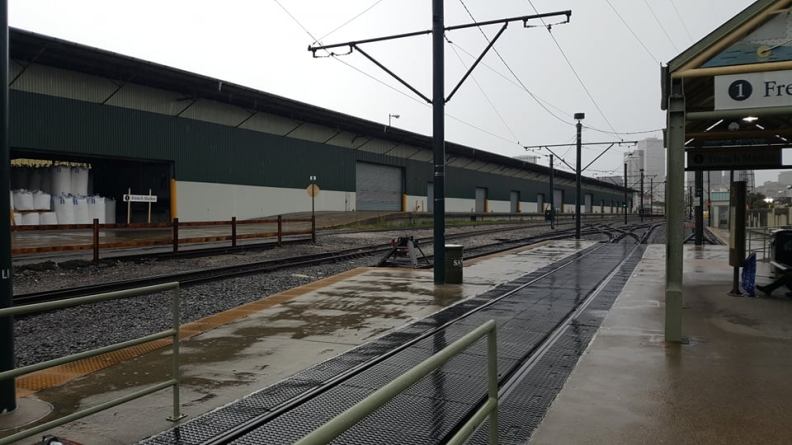 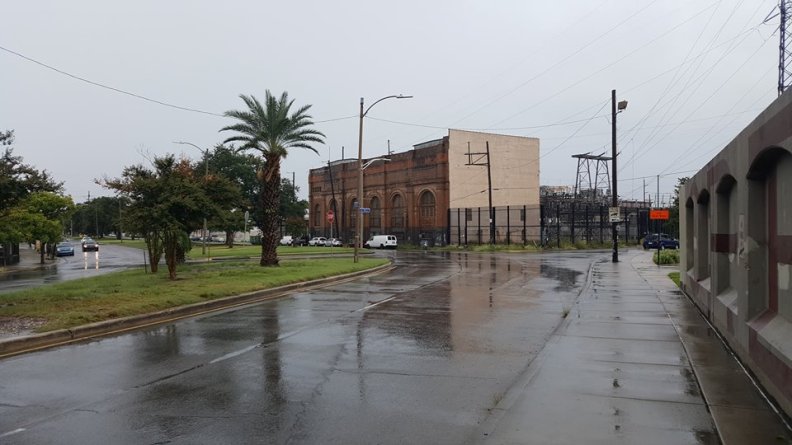 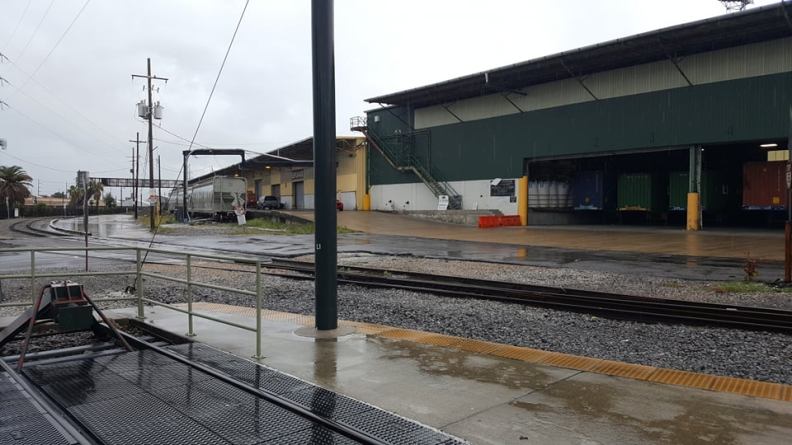 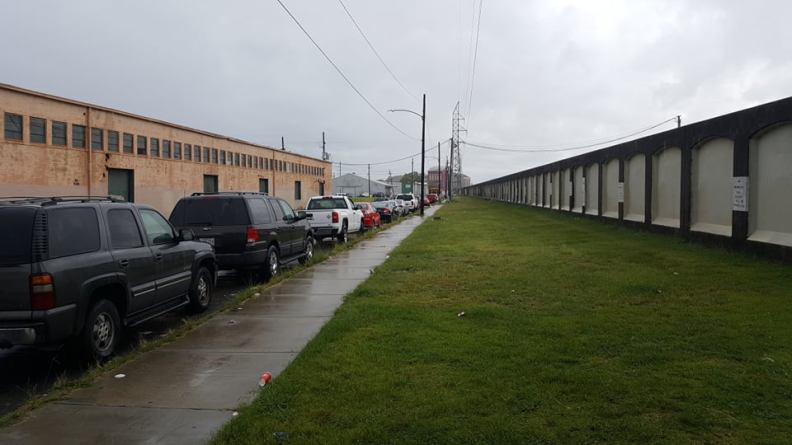 I continued through the market and crossed the road, finding myself at a set of train tracks. The park ought to be right here, I thought to myself. But there were no trees or gazeboes in sight. Just boxcars and warehouses. I kept going north, staying as close to the Mississippi as I could, but walled off from its familiar splendor by the railyard. I came to a long stretch of grass lined with pylons. There was no one around whatsoever. A sign told me I was in Crescent Park. But all I could see was a lawn, a few bushes, and industrial buildings all around. Warehouses, factories, power substations. So I turned around and made back for the hotel. It wasn’t the start I hoped for on this action-packed Saturday I had in mind- but that was okay, because the best was yet to come…