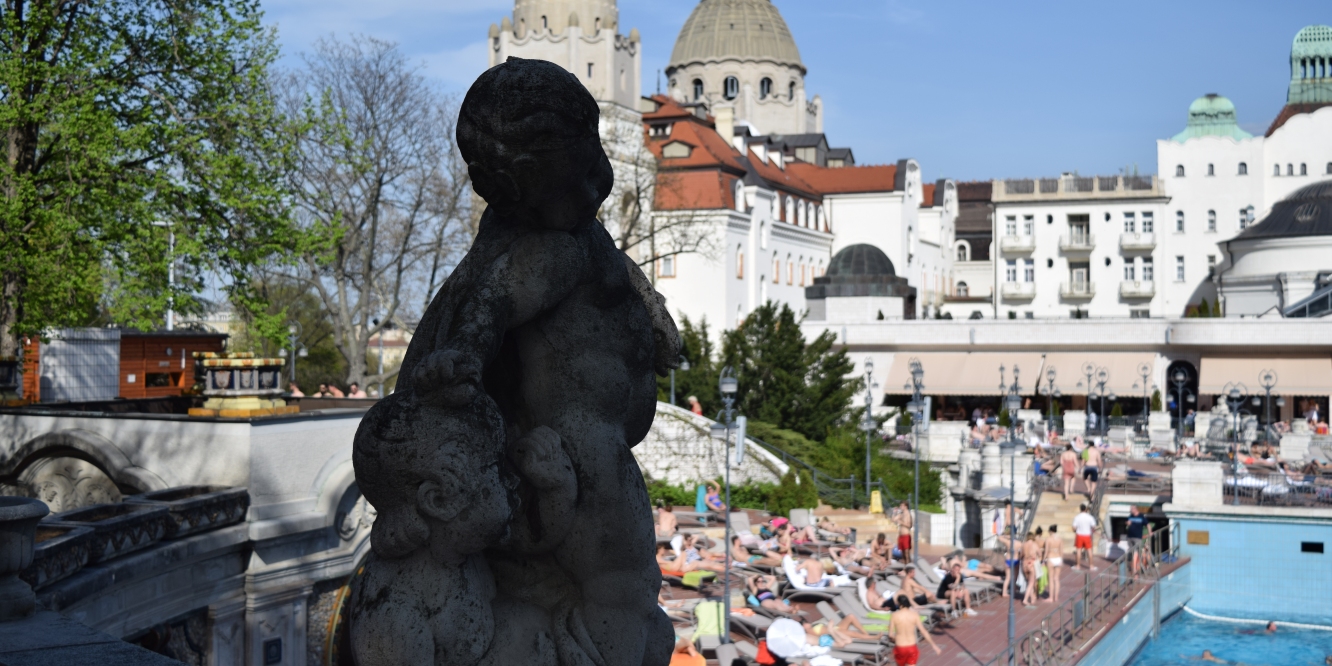 The Romans didn’t just colonize the area of modern-day Budapest for its strategic location on the Danube. Bathing was a huge part of Roman culture- both as a means of hygiene and recreation. The ancient city of Aquincum- which served as the administrative capital of the province of Pannonia- was founded so that the Romans could enjoy the hot springs there.

Budapest contains a whopping 80 geothermal springs and boasts the largest underground thermal lake in the world. When the Ottoman Turks occupied Hungary, they too made use of these springs, and built several decadent bathhouses that are still in use today. The three Ottoman baths- Király, Veli Bej, and Rudas- are some of the most popular in the city. You can tell them apart from the other spas by their Turkish design- the main baths are all octagonal with high, domed ceilings.

By the early 20th century, Budapest had established itself as the “City of Spas”, and frequenting its many stylish establishments soon became a staple for tourists looking for the Budapest experience. The thermal baths are part of what makes Budapest unique, and I decided before I arrived that I would go to one spa every day- and not do any repeats.

Here’s how it went down:

The first thing I did on my first morning in Budapest was visit Margitsziget (Margaret Island). After walking around its tranquil gardens, I stopped off at the Palatinus Strand to relax and take in my first Hungarian spa experience. Supposedly, this is where the locals go, since Gellért and Széchenyi are loaded with tourists wielding Gopros and selfie-sticks.

It’s certainly the least historical of the spas I went to. The design is modern and slick. But it’s also got this relaxing, summertime vibe to it. Outside there are several pools surrounded by pine trees. There’s an outdoor gym, a wave pool, an Olympic swimming pool, and loads of sunbeds where people sat with newspapers and novels. It’s easily the biggest of the spas I went to, and you really feel like you’re on vacation here. It reminded me of my time at the Mt Olympus Water Park in the Wisconsin Dells.

However, when I went there was a lot of construction going on so a bunch of the outdoor stuff was off-limits. Also, no matter how long I stood in the wave pool with hands on hips and eyes narrowed, the waves didn’t come…

The Rudas Baths are very popular with the locals. A taxi driver told me “Rudas is very good baths, very good”. I went here on the evening of my second full day in Hungary. I’d been all over the place- to Roman ruins, Opera houses, indie bookstores and massage parlors, and it was gone 7pm when I showed up at the Rudas Baths with a hungry stomach, depleted phone battery, and toes ravaged with blisters. The Rudas Baths, while retaining their historic charm, are obviously well-maintained. Even in the late evening it was more touristy and busy than the much larger Strand. The best feature that the Rudas has is its rooftop terrace bath, which offers a breathtaking view of the Danube and the rest of the city.

The Veli Bej Baths, built in 1574, are said to be the oldest in the city. I went here upon returning to Budapest from a day out in the village of Szendendre. It’s said that these baths are Budapest’s best kept secret- since they aren’t as well-known and admired as the likes of Rudas and Gellért. It’s very similar to Rudas- they’re about the same size, and they’re both of Turkish origin. However, I think I preferred Veli Bej. It wasn’t too busy, and I really felt like I was living in the Middle Ages. The historic main bath is so wonderfully-preserved, and it had perhaps the best atmosphere of any of the baths I went to. I felt like I was a Turkish Sultan, unwinding after a busy day of conquering.

There’s a good range of saunas on offer, a swimming pool, and best of all- a Jacuzzi. I spent ages in the Jacuzzi just sitting there with my eyes closed and mapping out the plot for my next novel. The only reason I got out was so that I could rush back to the locker room and write my ideas down- so I attribute all that inspiration to the work of the bubbles.

Gellért is often listed as the best bathhouse in Budapest. It had number one spot in all the power rankings I could find, and is celebrated for its opulent, Neo-Classical architecture. I got the feeling, when I entered along with a stream of other excited tourists, that this was “the big one”. Before I even stepped out of the locker rooms I knew that the other baths I had been to were small-time compared to this. The locker rooms were unisex, and for a while myself and a bunch of other lads were left scratching our heads and wondering where to change, since you had to pay extra for a cabin.

“I guess it really is mixed. Boys and girls. I’m cool with that,” the man near me said.

I recognized his accent as American and so I asked him where he was from. Turns out he’s a radio announcer from New York. I ended up chatting with him and his family for a while. They said I sounded American. I get that a lot, but mostly from British people. I told him I was raised in Wisconsin, but when I learned that his son was a trained linguist, I modified my story to say I was half-American.

The pools here are very grandiose. You feel like you’re in a fancy, 19th century hotel, which isn’t exactly untrue. I hobbled around the tiles on my heels, since my toes had open wounds from which poured blood and a strange colorless fluid. The way I was walking you’d have thought I just got released from a lengthy prison sentence, if you catch my drift.

The pools were super-busy but super-good. I spent well over an hour hopping from one to another before trying out the Finnish sauna, which reminded me of that scene in The Witcher 3 on the isle of Hindarsfjall.

The guidebook I brought with me rated the Lukács Baths second to Gellért, but for the opposite reason. The Lukács Baths are also famous for their Neo-Classical architecture, but the scene is much more quiet and low-key. Most of the people here were Hungarian locals, and there’s this sense of authenticity that comes with it. It’s also the most confusing of the baths I went to. I got lost several times when I was here. Heck, I got lost just trying to find the entrance to the damn place. And inside it’s a bit of a maze too. The Lukács Baths offer a plethora of spa experiences, including massages and a wide range of medicinal treatments. The main indoor thermal bath smelled strongly of sulfur, which, combined with the run-down tone of the place, actually added to its historic charm. 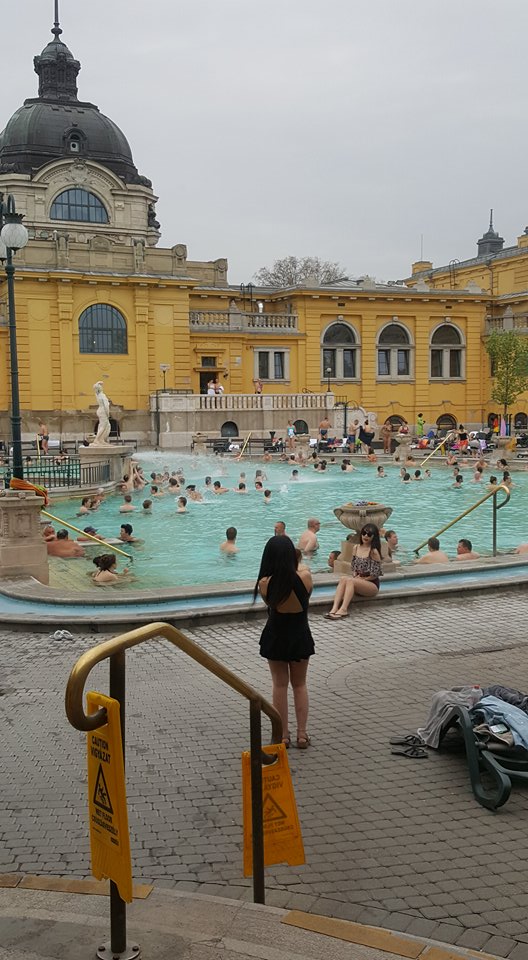 This place was probably my favorite. It’s undoubtedly the most popular with younger folks, and it’s the iconic bathhouse travelers go to in order to get their “gap yaar” and “bucket list” Instas. This was the only thermal bath I went to in the morning, since I wanted to avoid it when it got real busy. But even at 10am the place was packed. There were people from all corners of the world taking selfies by stone statues and frolicking in the water. There were old people bobbing up and down along the edge, roaming packs of teenagers splashing each other with glee, and of course the obligatory young couples fondling each other with hungry hands beneath the surface.

I really enjoyed Széchenyi because it’s so big. Even though the Strand had a bigger area, Széchenyi had more pools by far. One of the indoor pools even had this thick, minty aroma which I thought was an interesting touch. The architecture is so grandiose and really channels that antiquity vibe. I liked the steam room because those tend to be less overwhelming than the saunas. I don’t feel like I’m gonna collapse and be discovered face-down next to the coals. The Finnish sauna was very good too though. The young woman next to me took her top off. I wasn’t sure if this was allowed or not- perhaps my Hungarian readers can enlighten me in the comments. I didn’t stare, because I didn’t want to make her feel self-conscious. I believe in topless equality as much as the next guy. I didn’t look away either though- because that would be rude, wouldn’t it?

Király was interesting, because it was easily the most run-down of the bunch. It’s one of the oldest baths, and probably in dire need of some refurbishment if it wants to capitalize on that sweet tourist cash flow. The only bathers here were Hungarians, and it wasn’t busy at all. Unlike the Lukács Baths, Király is not stylishly-dilapidated. It’s not got that Victorian hotel feel. But it has got an atmosphere all its own. It’s one of the oldest baths in the city, but it’s just been forgotten about for some reason. I came here not just for my last bath, but as the last thing I did before I got my taxi to the airport. I’d already checked out of my hotel at this point. I liked the idea that I was bathing with the locals- working class Hungarians with tired expressions. No selfies, no Gopros, just ordinary folks looking to unwind from the stressors of daily life.

It’s not the biggest spa complex, but it does have a Jacuzzi, and a pretty good one at that. I stayed in the Jacuzzi for a long while, and I swear it took a soul-crushing amount of effort to drag myself out.

2 Replies to “The Baths of Budapest”