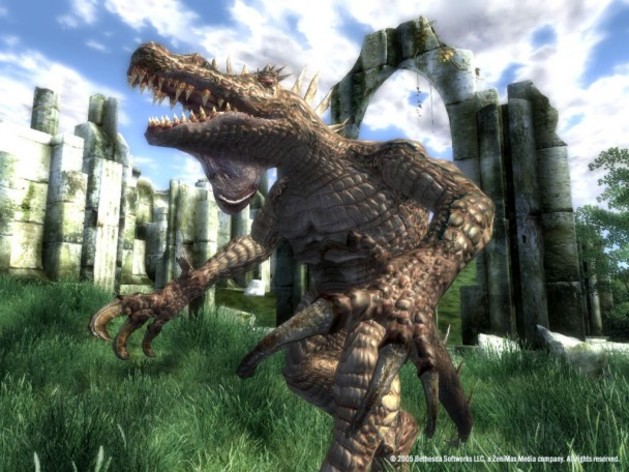 The Elder Scrolls IV: Oblivion was the reason I got an Xbox 360. It was a game that I heard about completely through word of mouth; right up until the day I got it, I had not watched any footage or seen any screenshots. It was October 29th, 2006, and my 14th birthday. I had requested the game on the word of other kids at school. I have distinct memories of hearing reports of the game during IT classes and lunch breaks. I asked what it was exactly and I remember someone telling me that it was a game so big that once it started, you had no obligation to follow the story, and that you could wander around a fantastical land “joining factions”. It was this part that sold it to me. The promise of freedom. As much as I loved KOTOR, that game still had a narrative that kept going forward. This however was a concept completely alien to me. It was a promise of a game so big I could literally ignore the “main story”.

So I ended up getting the game for my birthday and it turned out to be every bit as big as I had imagined. I actually have quite a vivid memory of that morning. My little brother had a rugby game and so he and my father were both out of the house for the morning. I started playing the game and I remember feeling blown away by the opening sequence. It may not seem like much by today’s Hollywood-standard cutscenes, but back then it was something truly special to behold. The camera gave a slow, panoramic view of this strange, beautiful and distinctive city and the epic Jeremy Soule soundtrack came in at just the right moment after Patrick Stewart’s narration. It just seemed to hit the right spot and I remember feeling two things I had never felt for a game before. Firstly, I remember feeling in awe of the editing of this sequence, the way all the parts fitted perfectly together to give an exciting, cinematic appeal. Secondly, I believe that Oblivion was the first game that I remember feeling completely amazed by the graphics. This might sound silly, but years after I had stopped playing Oblivion, I was afraid to put the disc back in the ol’ 360 out of fear that the visuals wouldn’t be quite as stunning as I remembered. At the time I simply couldn’t get over it. I even called my parents in on occasion and had them admire the water effects of one of Cyrodiil’s dappled brooks. And back then it was rare to praise a game for its graphics. We knew at the time that the graphics for a lot of the games we played were bad. The technology was in its infancy; I remember playing the Harry Potter games as a kid with a friend of mine who lived a few doors down the road, and we couldn’t stop laughing at the facial animations. Hermione looked like she had been repeatedly smacked in the face with the flat side of a skillet.

At the time I started my first playthrough, I had too little a knowledge of RPG’s to pick stats that I would later be happy with. I remember picking the Archer class and never using a bow and arrow. The sense of freedom and choice was overwhelming at first. I was mostly used to being told where to go and what was expected of me. During the escape through the sewers at the beginning I got my first taste of action in the form of the Mythic Dawn assassins. I remember thinking how realistic the sound effects seemed to be- the clashing of metal on metal as swords, shields, breastplates and helmets smashed together, the blood-curdling cries of the emperor’s bodyguards in which you could hear the sound of their primal blood frenzy. It seemed to signal a shift towards more adult games from the whimsical adventure games I had grown up on. It was a shift I was actually conscious of as it was happening. I remember my mother coming in my room with her round, concerned Welsh face and asking me “Is this new game a bit violent?” in a way that seemed to be saying to me It’s okay if you don’t want to play it any more.

I ended up at the city of Chorrol where I had to find some guy. On the way there was a highwayman that popped out of the trees. I think he was a Khajiit. I probably gave him my gold and headed on up to the city stables. When I got there, for whatever reason I attacked one of the horses in the corral. It was at this point that I ended up getting chased by the mare (who turned out to be a complete thug) and two city guards who witnessed the crime. I fled south, into the forest and turned around to discover that, to my horror, my attackers were still hot on my tail. What the hell was I supposed to do? I thought. Am I going to have to kill or be killed? I kept running and the horse kept chasing, followed by the guards. As we went further and further into the forest we started to attract the attention of goblins and giant spiders and before I knew it I was at the head of a Conga Line of Tolkien stock characters. Fortunately for me, the spiders started attacking the horse and I was able to escape. By the time I stopped running I emerged out of the south side of the forest and it was night. I was at the gates of a Gothic-looking city and I can still recall the rain beating against the cobblestone. It was at this point that the game froze on me.

Despite this first experience of the game, Oblivion went on to become one of my favorite games of all time. I realize that I can’t separate nostalgia from my opinion of the game, but I do believe that Oblivion is superior to Skyrim in a lot of ways. Skyrim for sure takes the cake in the gameplay department; the combat is much more fluid and intuitive. The whole experience of Skyrim is more streamlined, and that starts with the changes to the character creation. Oblivion feels much more like a hardcore RPG and I love how you can create and name your own class. Although Skyrim looks better and offers finer cosmetics, Oblivion’s character creation has more depth in terms of its stats. For me, Oblivion felt much more immersive and imaginative, with stronger side quests and faction storylines. I also think the cities are more interesting in Oblivion, and nothing in Skyrim compares to the Imperial City and its fighting arena. In Skyrim there are five cities and a bunch of hamlets. Don’t get me wrong, I do like Skyrim, but there’s something about Oblivion I find more engrossing.

It’s by no means a perfect game, and this is by no means an objective article. I like to think of this blog as my online journal and in this series I’m writing about the games I played in those critical years of my life. For the most part I’m referring to my teenage years, so expect titles from the original Xbox and the early days of the Xbox 360. I wish I had played Morrowind, and I intend to do so one day. During those days at school when everyone was talking about Oblivion, I remember a friend of mine telling me that Morrowind “had a better story”. Let me know your experiences of The Elder Scrolls games, or any other games that had a particular significance to you in the comments. If you enjoyed this post and want to see me do more content like this, please consider giving me a Like or Subscribe! Thanks for reading.

2 Replies to “The Games of My Formative Years: Oblivion”