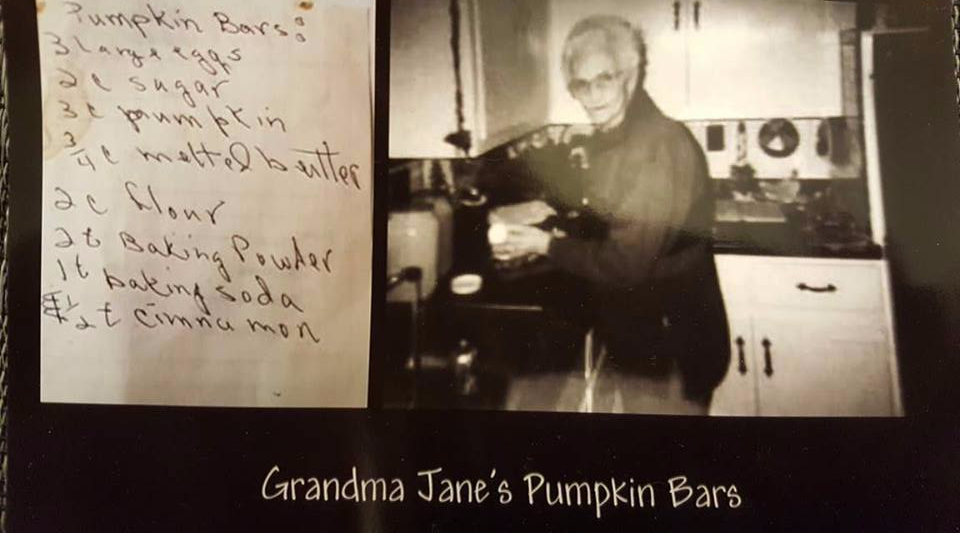 I wrote a post last weekend about how my roommate Anne-Marie and I finally got around to making Lauren Gleisberg’s Strawberry Ginger Lemonade. It felt great to tick it off our summer’s bucket list and it was a ton of fun. Today we crossed off the other big item on our culinary bucket list: Grandma Jane’s Pumpkin Bars. This one was very dear to our hearts, particularly Anne-Marie, whose grandmother developed the recipe. I was fortunate enough to meet Grandma Jane in the summer of 2014, when my friendship with her sassy granddaughter was in the height of its blossom. Despite being a gentle Irish-American lady and small in stature, I was struck by the aura and presence she commanded. This was a lady that I understood to be one of those larger-than-life figures. Anne-Marie’s then boyfriend and now-fiancée Aaron described her as being “especially sweet, even by grandma standards”. Grandma Jane lived in the Green Bay area of Wisconsin where she was a beloved teacher and a killer writer. This was a lady both softly kind and sharply intelligent. She clearly had an enormous influence over Anne-Marie and her siblings, and has left a lasting legacy.

I find this kind of stuff so fascinating to discuss. The recipe she left Anne-Marie is just one aspect of that legacy. As we went through the process of making the pumpkin bars, I realized just how much you learned about someone through their cooking. It’s a wonderful thing to do, I think, to remember someone through the act of cooking, and its ensuring the survival of the legacy they leave. I thought to myself, when I’m gone, will anyone be making one of my recipes? I better start taking cooking lessons so I don’t send one of my descendants to the ER. We went through the various steps, adding for example two cups of sugar, a stick of butter, and I noticed that Anne-Marie was laughing in that light, French way she is apt to do.

“This is just typical Grammie,” she’d say. Clearly Grandma Jane had a sweet tooth. She liked to keep her kids and grandkids well fed and full of hearty comfort foods that ease the soul. Anne-Marie recalled memories of cooking with her grandmother and I listened intently to the family trivia that came my way. So much of her personality was in these Pumpkin Bars. As I took a bite of the finished bar I thought about that famous passage in Marcel Proust’s novel In Search of Lost Time where the narrator takes a bite of the Madeleine cake and how this act triggers what he called “involuntary memory”- something which better captures the essence of the past than the conscious effort to remember. Maybe it’s because Anne-Marie is French. Maybe it’s my guilt that I still need to finish reading the behemoth that is Swann’s Way. Obviously, when I took a bite, it didn’t bring back any memories, but I still had this strange feeling of traveling backwards in time. Perhaps it was just the sugar rush? But no, seriously, I felt that I had on my plate a little piece of Anne-Marie’s childhood. I’m always asking after stories from her and Aaron’s past. How they met, what they ate, the music they listened to, the games they played, the dates they went on. Playing for the high school soccer team and going to Packer games. But I’ve always had to use my imagination to recreate their tales. This was the first time I didn’t need my imagination to fill in the gaps. I had a little taste of Anne-Marie’s childhood for myself. 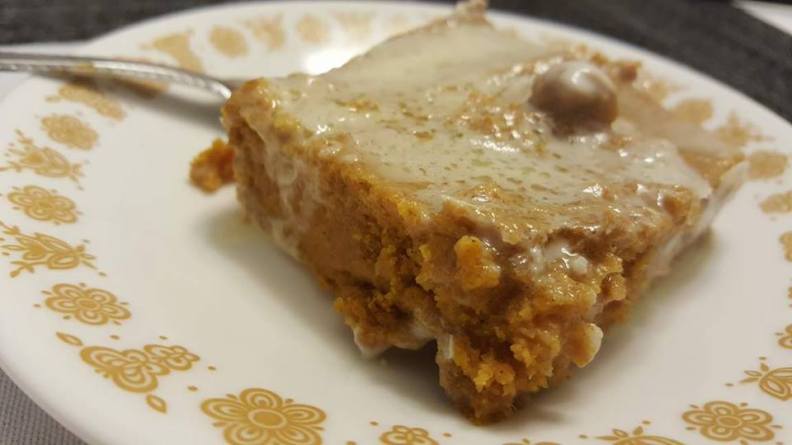 This post is a little different because we didn’t make the recipe simply because we wanted to eat pumpkin. It was all about remembering Grammie. It just so happens that I love pumpkin! It’s a quintessentially American ingredient, and eating the bars reminded me a lot of eating the pumpkin pies I had during my student exchange in 2012. America is a very seasonal country, and it seems like it’s rare to eat pumpkin outside of Fall. Much like pumpkin pie, I really think this would go well with a dollop of vanilla ice cream on top.