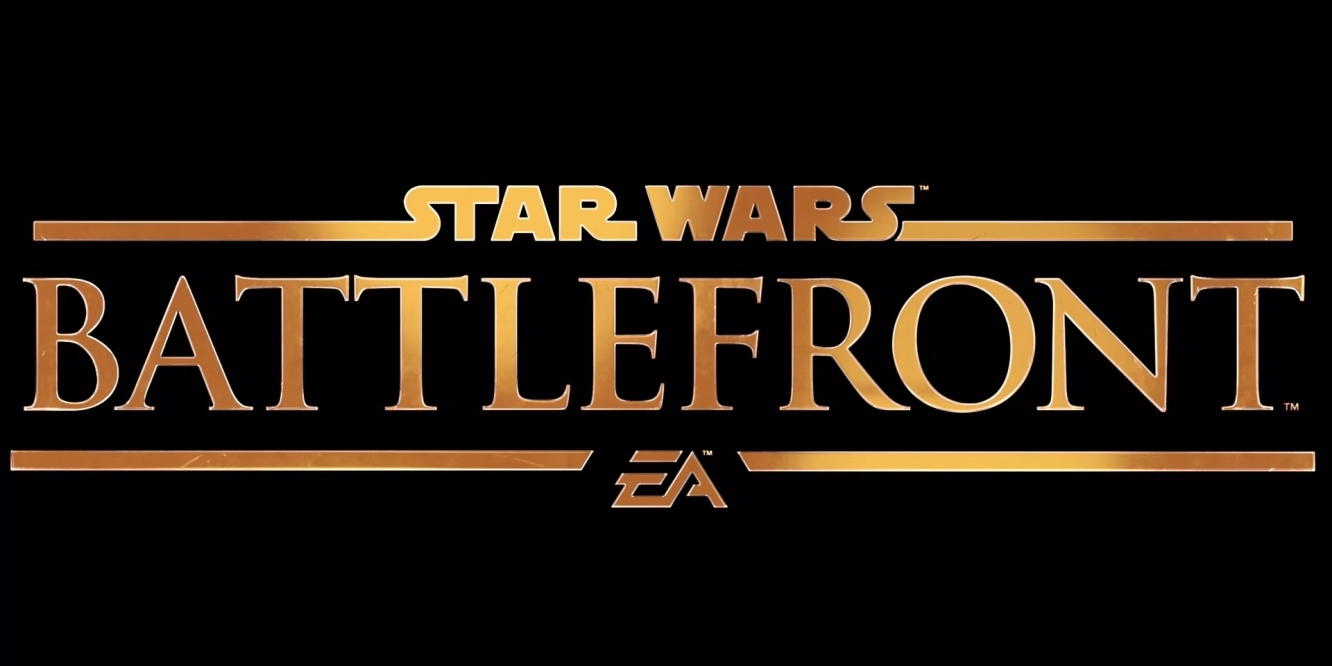 The other day my roommate and I were driving around Webster, TX to complete a few errands. We had a little time left before our other roommate was expecting us home for supper, so we decided to take a cheeky visit to one of our local game retailers, Game Over Video Games on Bay Area Blvd. We had intended to grab a copy of The Elder Scrolls: Morrowind, after the Game of the Year Edition we picked up at Half Price Books turned out to have data corruption. I’ve never played Morrowind and our idea was to do a Let’s Play of the game together to upload to Youtube and this here blog. Unable to find this and the other games we wanted to do review videos for- Metro: Last Light and Rayman 2: Revolution– we ended up snagging The Elder Scrolls: Oblivion and Star Wars: Battlefront (2015 version). Then, with E3 having just showcased a sequel to the latter, I felt that the time was right to get a lot of my feelings about the game out of my system.

I have some very fond memories of the original Battlefront games, which I played on Xbox. I got the first one for my 12th birthday. That day my two best friends at the time- whom I shall name Shane and Artie for the blog- had come over to the house and we were about to go out and play laser tag together. I remember playing as a Droideka on Naboo as they watched. The Battlefront games were definitely the source of some fun memories, and I especially enjoyed the addition of space combat to the sequel. However, I have to admit- they were never counted among my favorite games as a teenager. Time has a way of obfuscating things, and it’s easy to attach gilded, nostalgic qualities to those games in reaction to the infuriating 2015 franchise reboot. In truth I remember liking them but not loving them. They were fun and all, but at the time I was much more interested in playing games like Jedi Knight: Jedi Academy. But of course, expecting EA to invest in a reboot of adventure game classics like Bounty Hunter, Obi Wan and the Jedi Knight series is somewhat akin to waiting patiently for a wood tick to stop engorging itself on your blood and just fly away. It’s an increasingly multiplayer-focused industry, and the higher-ups would rather put out a game that people play over a long period of time, allowing them to make more money through micro-transactions and paid DLC.

Which brings us to the game my roommate and I acquired last week. My roommate had not played the new Battlefront yet, whereas I had. It was a waste of money, I told him. But for ten bucks, there might be some fun to be had. After all, I’m not saying that Battlefront can’t serve as a fun and entertaining game. Nor is it poorly made. It’s more that its imperfections are so egregious they become magnified, and one can easily forget that underneath there’s a little potential here. The graphics and environments are beautiful. And Star Wars is as good a setting for this kind of game as you are going to get- there’s a whole galaxy to explore full of a myriad of cultures, bizarre life forms, and fantastical settings. But that’s the problem right there. Battlefront didn’t add something of its own to the Star Wars legacy. It must be noted that I am criticizing it here not as a game, but as a Star Wars property. I’ll approach it as a game critic later in this post. For now, however, I’m a Star Wars fan- and a damn angry one at that. As many others have pointed out, the game seems less interested in telling a Star Wars story or exploring its rich galaxy than it is wearing the aesthetic of the Original Trilogy like some grotesque, Ed Gein-inspired skin mask. What the game boils down to is a watered-down Battlefield 4 with a Star Wars theme pack. We are offered Tatooine and Endor and Chewbacca and Vader. The entire enterprise seems like a bland, corporate cash-in rather than a new, dynamic title with artistic vision. Keep rehashing the old stuff and you run the risk of making Star Wars boring. 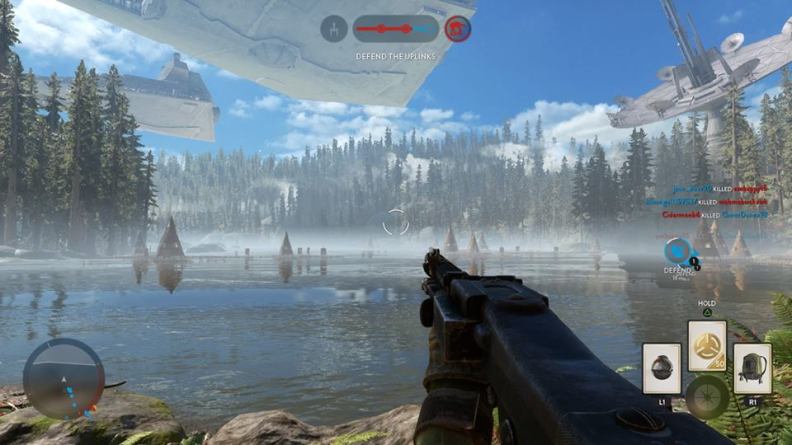 But let’s move on to a discussion of Battlefront as a game. Like I said, my roommate and I have been having some fun with it. As much as it may disappoint me as fan of Star Wars, there is potential in the little clusterfucks it offers- it’s just that it could be so much more. I’m less angry at the game than I was when I first played it. My roommate and I have been taking it in turns to have a go at the multiplayer. So far we have had a mixed response I would say. It keeps us entertained for a short time, but pretty soon we get fatigued by it. For the most part the game functions soundly enough; its most glaring drawback being the sticky effects one encounters when trying to navigate elevated terrain. Getting bondangled by every twat with a thermal imploder in 20 yard radius because my Stormtrooper had his ankle stuck in a tree root starts becoming grounds for a rage quit very fast. Overall, I like how the game feels and how it handles- and I especially appreciated the option to go into third person, something my roommate and I have found makes things a little easier.

I would say my biggest gripe with the game is its maps. When the game launched I could count the number of maps on one hand, and they were all so boring. We need to move past the goddam Battle of Hoth already. Not only was the game’s choice of maps spectacularly inane, but the maps themselves lacked the creativity I was looking for. Endor was a square mile filled with trees, here and there a few ridges. It’s beautiful to look at it, but it’s not all that fun to play. I’m looking for more nuanced and intriguing environments that lend themselves to interesting gameplay situations. It actually made me appreciate games that I had previously disparaged, namely Halo 2 & 3. See, the thing is I’m jaded. When I was a teenager, the Halo games were the hottest thing, but they didn’t appeal to me at all. All anybody wanted to do back then was play Halo 2 on split-screen. And whilst I’m sure that sounds like a grand old time to a lot of you, to me it was always like being dragged on a long shopping trip with one’s parents. Anyway, I’m getting off-topic. The point I’m making is, when compared to shallow modern shooters, the games I used to dislike years ago don’t seem so bad. I distinctly remember those Halo games having a huge variety of maps, and all of them were unique. There were big buildings, wide open spaces for large scale warfare, and more claustrophobic maps whose tight corridors lent themselves so easily to orgies of grenades and energy swords. Whilst I’m still not tempted to play the games, they have at least earned my respect. 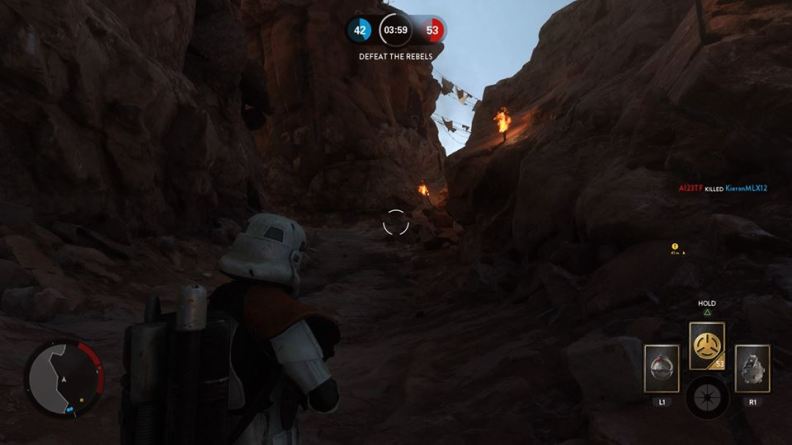 Also, the system of acquiring vehicles by means of power-up coins is absolute dogshit. This is something I really hope they change for the next Battlefront title. In games like Halo, and even Battlefield 4– which is very much the basis for the new Battlefront model- you have the excitement of running toward a tank and taking it. It’s a lot more immersive and it serves to keep the action and intensity going. By contrast, Battlefront’s coin system completely removes any chance of swashbuckling, balls-to-the-wall tension, as you spawn again in some safe corner of the map and try to kill as many players as possible before inevitably getting blown to Nal Hutta. It’s also terribly imbalanced, as the rebels have few if any vehicles to combat the walkers of the Empire. One of the most iconic features of the original games was the immersion one felt at running into the hanger and grabbing the last speeder, the exact same way a trooper would do in the films. There’s nothing fun or exciting about searching for a pale, translucent discus in a field of snow. Seeking it out is frustrating and breaks with the excitement of the battle. Get. Rid. Of. It.

My final criticisms of the game may just be personal taste; I’m not at all a fan of the card power-ups and the game’s economy. In fact, I’m against levelling up altogether. I realize that may irk some gamers, but I prefer games like Overwatch (which, as far as multiplayer shooters go, is excellent- even if it is a tad overpriced) in which newcomers are not at a disadvantage due to a lack of the best equipment and upgrades. In that game the only edge the veterans have over the newbies is experience, and that edge is plenty in my book. They don’t need better guns and power-ups. There is something so pure about the fact that every Overwatch player regardless of experience has the same tools at his or her disposal. I hope the developers of Battlefront scale back on this kind of bullshit, if not remove it entirely. I would also like to see a return to the class system of the originals- which it seems like they are doing for Battlefront 2. It was hella fun playing as a scout trooper one game and a death trooper the next. I think gamers are cottoning on to the fact the whole “do it your way” trend in gaming offers a lot less depth than advertised.

I have seen a little of what the studio is preparing for Battlefront 2 during the game’s coverage at E3 the other week. From what I saw, it seems that they are taking a lot of the first title’s criticism on board. I would say that my attitude toward it at the moment is one of cautious optimism. I can tell they are making active efforts to improve the game in all areas, even going so far as to pull a Titanfall and incorporate a single player story experience for the sequel. I am even more pleased- as a Star Wars fan- that this story will be going somewhere new, exploring the narrative of an Imperial officer after the Battle of Endor. It supposedly will help bridge the gap between the original trilogy and the sequel trilogy, which is a great idea. I also like the idea of a story from the perspective of the Empire.

Perhaps the best evidence for EA DICE’s intent is their announcement that they will be scrapping the paid Season Pass in favor of Overwatch’s seasonal model. All DLC will be free. I’m not gonna lie, that right there makes a difference to gamers. Battlefront 2 releases in November of this year and I am honestly rooting for this game. I won’t be pre-ordering. But I may just pick it up, if the reviews are good or if my friends want me to play it with them. Anything Star Wars is sure to tempt me. 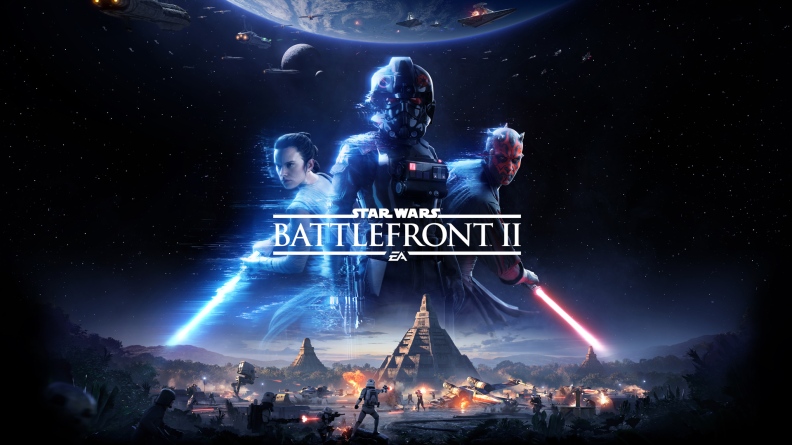