I didn’t expect the new Doom game to come with a Photo Mode. It seems ill-suited to an experience this intense and fast-paced. You don’t have time to admire the scenery in a Doom game. And the geometry of the environments are designed around gameplay, not immersion. They’re arenas; the jump-pads and monkey bars and purple ooze arranged with as much care as the intricate, realistic details of Valentine in Red Dead Redemption 2. In the latter, space is used to transport you back in time. The environment is there to be admired, to be digested every time you leave a footprint in the snow or see sagebrush blowing in the wind. In Doom, space is a tool- just as important as your Flame Belch and your chainsaw. You’re not meant to look at a floating platform or a climbable stretch of wall and say “Ain’t that convenient.”

It’s about ripping and tearing and nothing else. But it’s in the playful spirit of the game’s ripping and tearing that I discovered the true value of the Photo Mode. If you slam down on the D-pad at the right moment you can capture the poor demons in their moment of anguish. It’s quite funny because they’re murdered so quickly that they’re still expressing that anguish for a second or two after they’re dead, and when I see it I imagine on them commenting on their own demise, sometimes with sarcasm, sometimes with defiance, but mostly with disbelief.

So I put together a little exhibit of these demons in their last moments. Each one reveals something about the personality of the Doom Slayer. As Jim Sterling once said, he’s “a masterclass in avatar expression”. The sheer disdain he has for Hell is expressed in every action he takes, and it’s this hatred that gives him his iconic mystique. They fear you. They fear only you. You are the apocalypse for their kind. That’s one of my favorite aspects of the franchise, and Doom Eternal in particular.

It’s actually a fun challenge to get as close as possible to the demons and snap a photo of them without going for the Glory Kill. I feel like a mum taking pictures of a group of toddlers in Halloween costumes, all pulling their scary face. You find the kids adorable but they think you take them just as seriously as they take the business of being scary. 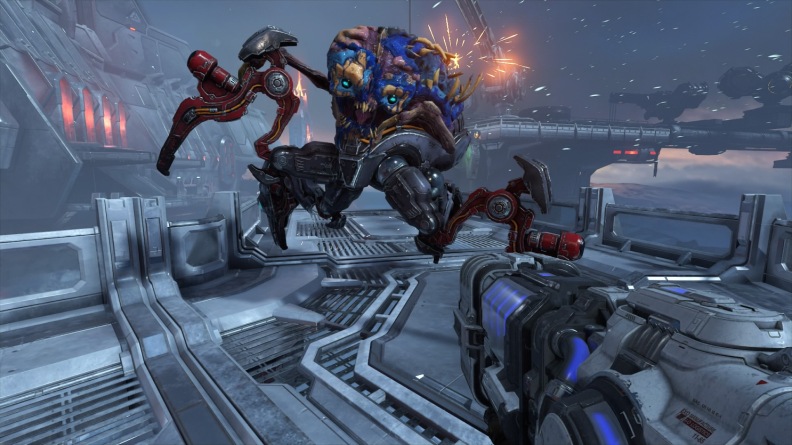 My favorite weapon in the game is the Super Shotgun- regardless of the addition of the meathook. It’s just so satisfying to use, and you feel a real sense of weight every time you fire. But the weapon I used the most was easily the Plasma Rifle. 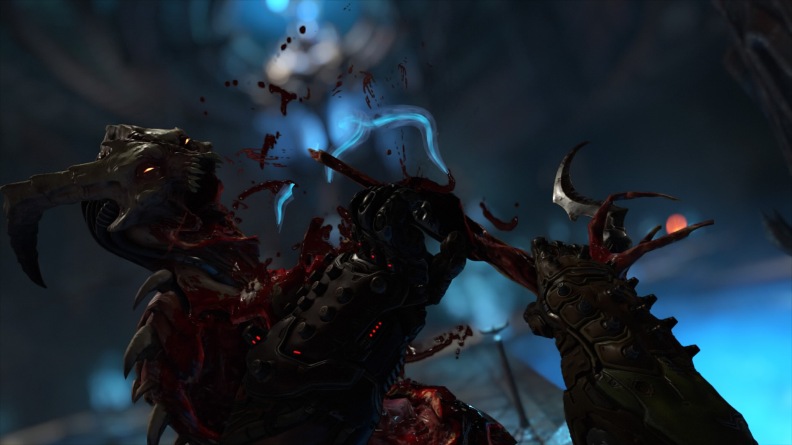 As I was making notes for my review during my first Doom Eternal playthrough, I actually planned to criticize the Marauder as being “unreasonably hard”. It’s been widely said that he’s a cheating cunt- and while he’s definitely up there alongside the Headless in Sekiro, the Praetorians in Mass Effect 2, and the Valkyries in God of War in my personal Mount Rushmore of Most Challenging Enemy Types- I have softened my opinion on him and crossed-out the note in my journal. I found out from the Youtuber Under the Mayo that the Marauder only summons his hell hound when you fire at his shield. It’s a punishment for not timing your shots appropriately. This detail is absent from the game, even in its overly-friendly tutorial pop-ups, and it makes all the difference when it comes to beating him. 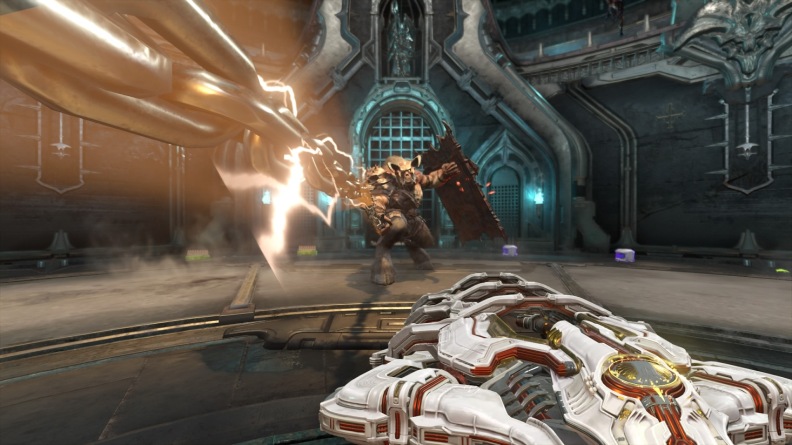 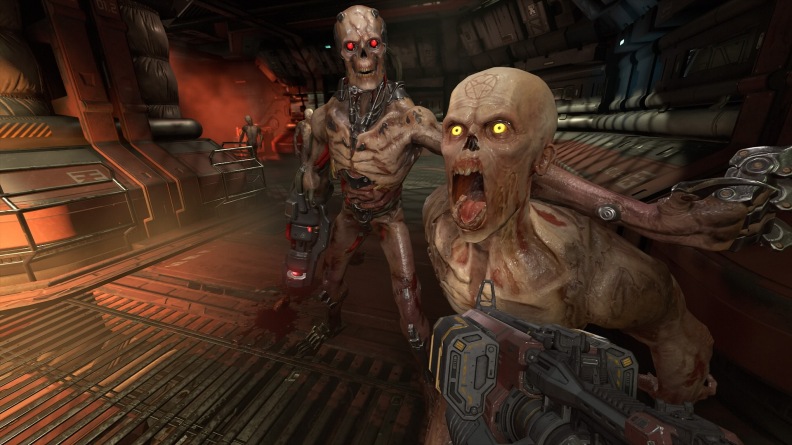 Aside from the Marauder, I’d say the toughest enemies for me were the Arachnotron and the Cacodemon in the early levels of the game, the Whiplash and Mancubus in the mid-game, and the Archvile and Pain Elemental in the late game. From an aesthetic point of view, my favorite demons are the Doom Hunters. 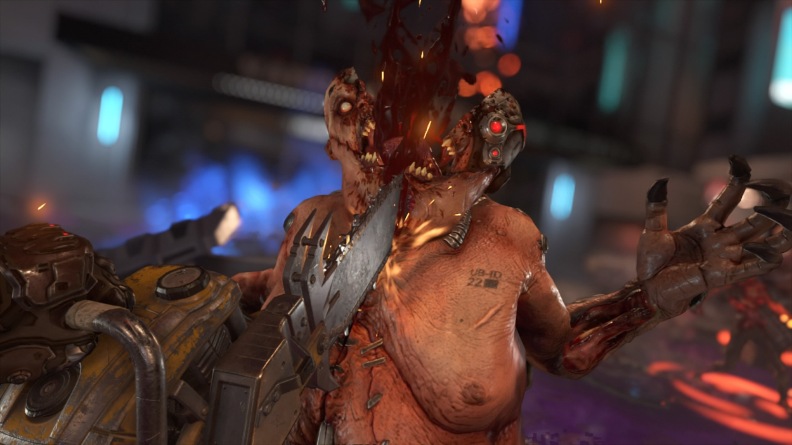 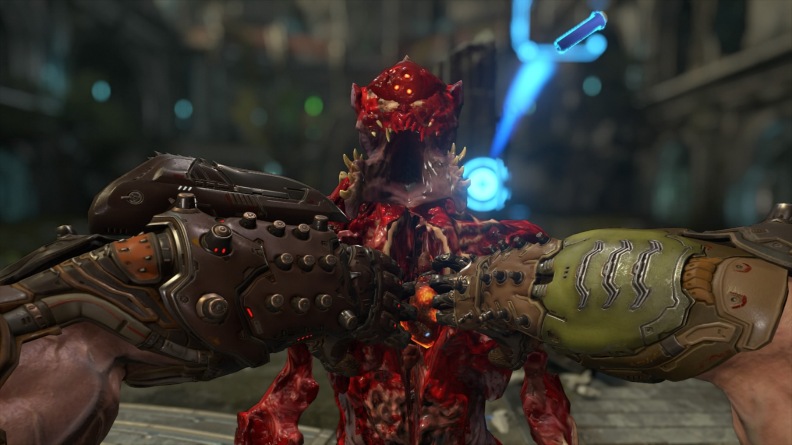 It’s important to me that in the lore the demons remain demons and don’t become aliens. If they become aliens they instantly become sympathetic- they have reasons for doing what they do, a point of view to be considered, a culture perhaps. I prefer to think of Hell in the Doom universe as a kind of mindless hunger, almost like a disease. The demons are the physical personification of our sins, knowing nothing except perpetual torment and hatred. Something unknowable and mysterious, that can’t be reasoned with. It also makes them more threatening. Aliens are finite. They have resources, they can be quite permanently extinguished. But demons are relentless. The mixture of science fiction and the occult is interesting, and I hope it stays that way. 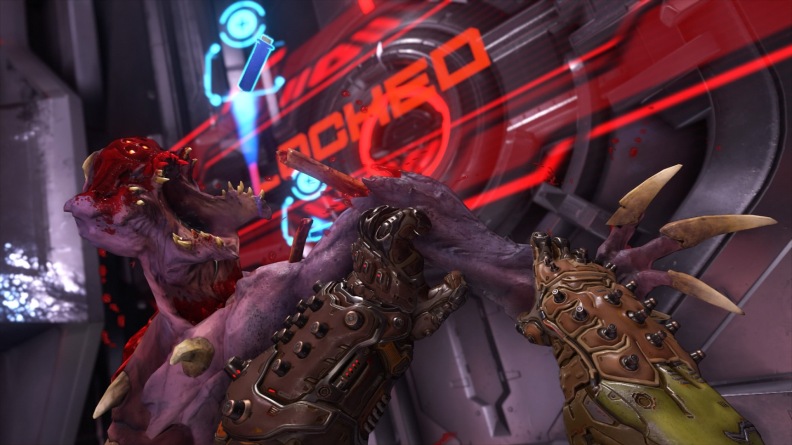 My favorite level in the game is probably Mars Core. I like it because you traverse a range of environments, never staying in one too long. You begin on a space station, then you’re platforming through a debris field in outer space, and finally you end up on the surface of Mars itself. Nekravol parts one and two are both very good as well, with the Tower of Babel reimagined as a factory of pain. 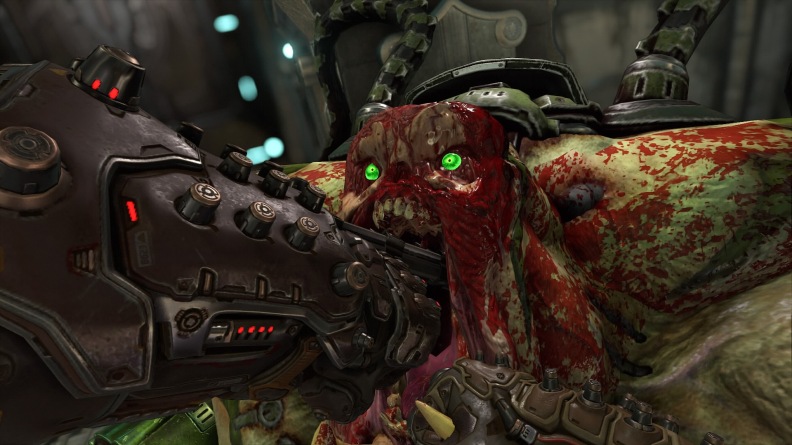 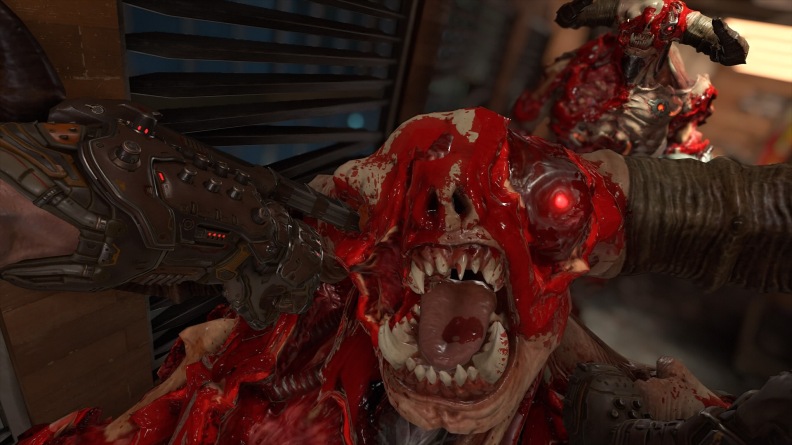 The above photo might be my favorite; stabbing a Tyrant through the eye while his best mate watches helplessly. Anyway, I hope you enjoyed this gruesome exhibit. I will be back with one final Doom-related blog post at the end of the week! 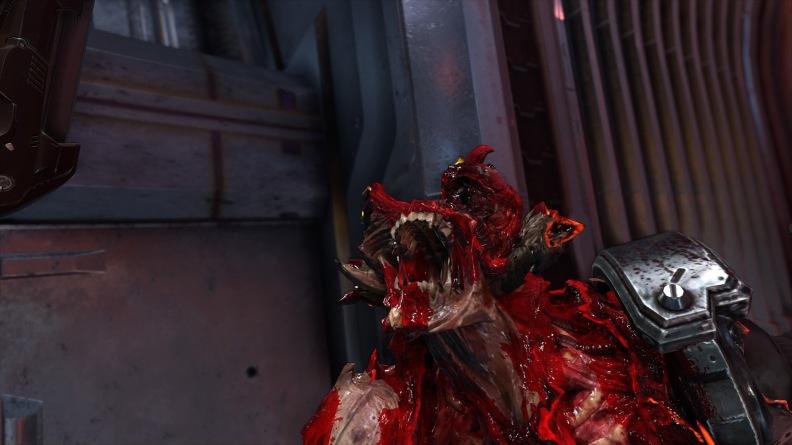