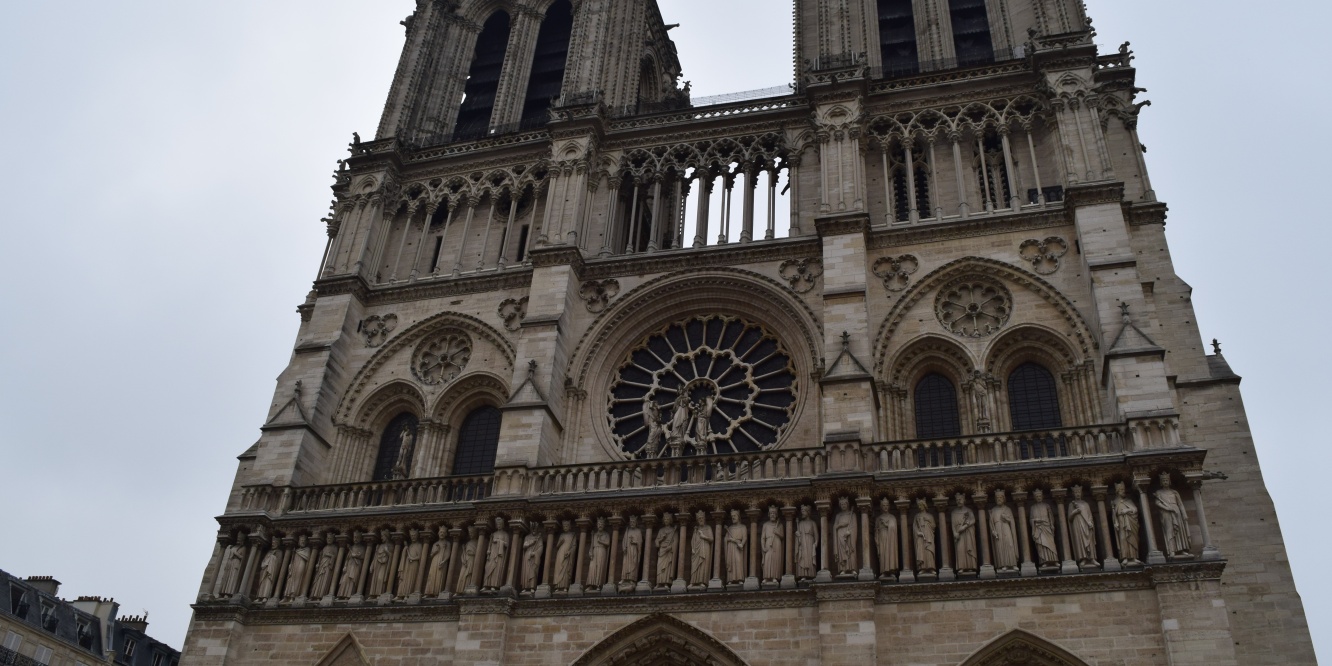 The roof of the Notre-Dame de Paris went up in flames on what I had designated as “Game of Thrones Day”.

As I stewed in excited anticipation for the beginning of the show’s final season, less than 300 miles away a father swung his daughter around and around in the shadow of the cathedral, not knowing that an hour later the roof would collapse and the spire would crumble.

Their moment of absent play was captured on camera by a nearby woman, tying them forever to the day the world nearly lost one of its most treasured historical landmarks.

The photo went viral. People clung to it as a remnant of “before”, fearing that now they were living in “after”.

I started to think about “after” when I saw footage of the spire slowly topple and plunge into the flames below.

The image was strikingly apocalyptic. It evoked my childhood fears of things being lost forever, of being unable to accept living in a state of “after”, of even conceiving that “after” would one day be real. As long as I lived, I wanted to be wrapped cozily in the warm folds of before, sucking my thumb.

Once, when I was a kid, my family and I were on vacation in Wales. My little brother and I would always wake up early and play with our toys while our parents slept in. That morning we were playing with a set of animal toys. An argument broke out and my brother grabbed a rubber snake, pulled from both ends, and snapped it in half. I started crying and thumped him. He started crying too. Our parents woke up and I got punished. Obviously, my crime was worse, but back then I didn’t think so. In a few minutes, my brother would be fine. Whereas my toy would be broken forever.

Of course, the life of a child is so fleeting. Our curiosity takes us from one focus to the next. In a day or two the toy would be forgotten about. But on that morning, it was the most important thing. In the moment, the tiniest misfortune seems like the end of the world.

Many years later, these childhood fears resurfaced during a philosophy class in college. Our professor stated that people were more afraid of dying than death itself. But a friend of mine spoke up and declared that he was more afraid of death.

“I just can’t imagine not existing.”

I felt as though his words echoed my own longstanding fear of the point of no return.

But I wonder if I’m still as afraid of death now as I had been growing up.

Once the initial shock of seeing the Notre Dame ablaze had passed, I began to feel oddly at peace with the whole thing.

I read that Macron had pledged to rebuild the cathedral within five years, and all I could think was that we were delaying the inevitable.

One day it will be gone for good. A day will come when everything we’ve ever created will be irretrievably lost, despite our best efforts to preserve them. Everything we cherish, our greatest cultural achievements, will one day vanish without a trace.

One day the works of Shakespeare will be performed for the last time.

One person in that production will be the last person ever to speak a line of Shakespeare.

Will they know that as they are saying it? Or will they assume that there will be many more productions, and therefore many more thespians to perpetuate the life of Shakespeare as they speak it each time into existence? Will the last line of Shakespeare ever said by humankind even be the final line of the play it’s in? Maybe the last production will go unfinished, interrupted perhaps by a tactical nuclear strike?

But, futile as it may seem, we will make every attempt to preserve the likes of Shakespeare and the Notre Dame until the last possible moment- until it’s already far too late in fact- because without them, what’s the point? We’re already dead.

When I saw the large crowds gathered outside the Notre Dame in an emotional, candlelit vigil, all of them singing songs, I didn’t get that warm fuzzy feeling everyone else got. Maybe I’m just too cynical and jaded to ever consider celebrating human nature. I suppose you could read the scene in a variety of ways; aesthetic, religious, or even nationalist in character. Personally I opted for a bleaker view of the scenes of unity.

Angsty teenage Hamlet has always resonated with me (can’t think why!), and I liked to think that the crowd outside the Notre Dame were all Hamlet, and the burning cathedral the hollowed-out skull of Yorick. For a moment, they were face to face with the ultimate and inescapable fate of us all. Death is the great equalizer.

I find it interesting the way big events trickle down into our individual private lives, even if that process can be quite damaging. I’ve been thinking about this all spring. I decided I wanted to do a blog post about the spring of this year, intertwining my personal life with events at large. The Notre Dame Fire seemed as good a place as any to start.

What does the place mean to me? I was fortunate enough to see it once. I traveled to Paris in 2016 with Anne-Marie, Aaron, and the diamond engagement ring he was about to give her. So that’s what I associate the building with. I think of us taking pictures of each other in the gardens around the back of the cathedral. I remember wondering excitedly when Aaron would pop the question, as I took portrait after portrait of them against the flowers. I think of Anne-Marie, quite unaware of the ring that awaited her finger, giggling at us from under her floppy, wide-brimmed black felt hat. We fell away from the Notre Dame, falling into absent laughter, crossing the flooded Seine and heading toward the Latin Quarter in search of some authentic fondue. We were so consumed with love that we forgot about the cathedral, not thinking we had quite possibly taken our last look at it.

The relationship between the big and the small, the public and the private, the profound and the mundane, is another obsession of mine.

Our own lives are enormous to us. So big in fact, that sometimes we can’t see the bigger picture. When I visited Paris, the grandeur of the Notre Dame seemed tiny compared to the love of my two friends, serving only as scenic footnote to their story. But all the other tourists there had no idea who we were, and I imagine each of them ascribing the same cathedral with the tones of their own narratives.

The day after the fire I discussed it with my work colleagues. Not in any great depth mind you.

Life goes on. Pretty soon we’re talking about Game of Thrones again. A ticket comes through for a Priddy Lamb and a Cajun Chicken, interrupting the conversation. Time hurtles forward.

The kitchen is a hectic environment, and when I think back on the spring of my 2019, the energy of that place dominates the season. Much as our various anxieties and neuroticisms obscure our focus of the wider world, the kitchen too is an eclipse. The scratch of the ticket machine can mean life or death. Each shift presents new and unforeseen challenges. It’s a vortex of different people living different lives compressed into a single, crazy, combustible space.

“Sometimes we worry about something as simple as how many chips we put on a plate,” my friend said one melancholy evening. “And it all seems so small, when you think about all the black holes out there, and the ultimate heat death of the universe.”

One lady complained that there wasn’t enough meat in her lasagna. Her idea of a beef lasagna was different to ours. I approached the head chef and asked if it bothered him.

“What if the person on the next table doesn’t like their lasagna to be overloaded with meat?” I asked him.

“Exactly. So do you think I should change the recipe because of one complaint?”

“When it comes to issues like this, you make the best meal you can for the majority. You cook for the majority, Michael. Remember that. There’s something for you to put in your blog.”

The spring of 2019 has been dominated by disagreement and disunity, with the fire of the Notre Dame standing out like a frighteningly bleak maypole to remind us of our common fate. I think that’s what I’ll remember when I look back on this period of my life. I’ll think of the final season of Game of Thrones being a massive letdown and the online petition to have it completely remade. I’ll think of the way Parliament is split down the middle, and all of Theresa May’s failed deals, how her dogged, somewhat psychotic insistence that her government was “strong and stable” came crashing down like the fucking Hindenberg, how she cried on national television. I actually don’t doubt that she tried her best and worked hard for the best outcome possible, but it’s hard for me to feel any sympathy for her when I think of all the tears she didn’t shed for Grenfell or Windrush. The spring has ended with uncertainty and widespread resentment, and this has filtered down to the pub, and consequently, my own life. I’ve never felt events at large impacting my mental health quite like this past spring. I’m so overcome with disgust for the nativist, ethnocentric ideology of Brexiteers/Trump supporters that every time I see the likes of Katie Hopkins and Nigel Farage open their mouths I want to pour lead-based paint down their throats. I have to take a moment and calm myself down, play some Red Dead or something.

The inherent chaos of a kitchen makes me think about the chaos of life. The high turnover of staff. The miscommunications. The suboptimal internet connection. Every issue comes and goes with rapid pace. Everything evens out. The most hectic shift will always end with the restoration of the equilibrium. Life goes on.