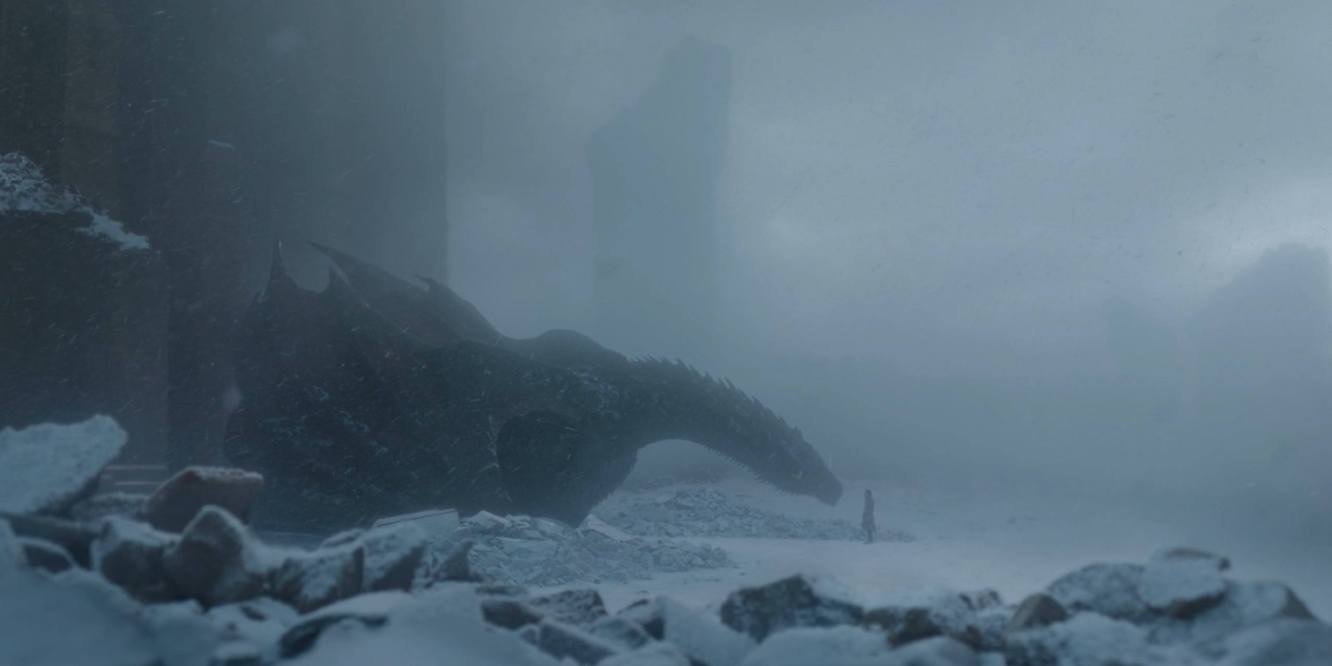 And now our watch has ended, not so much with a bang as with a hollow thud. I was caught off guard by my own lack of excitement for the Game of Thrones finale on Monday. This should have been a party of sorts, a grand occasion in which I celebrated the conclusion of my favorite show. But I think a part of me just wanted it to be over and done with. As I have said in my previous reviews, I’m underwhelmed and disappointed with the eighth season, and I plan to cover this in a blog post next week sometime. For now, I’d just like to address the final episode itself.

Of course, it’s hard to separate my critique of this episode from my thoughts on the season as a whole, since the lack of organic build-up diminishes the effect of the conclusion. I don’t have a problem with the events of the episode themselves- I just think the groundwork was not laid down in order to make them resonant and powerful. I’ve never been married to any specific ending- who sits on the Throne, who dies, prophecies being fulfilled et cetera- all I’ve ever cared about is the execution. Before the season began, a dozen scenarios ran through my mind; I wondered if the Night King would destroy Winterfell, and Bran would somehow call upon the magic of the Isle of Faces to split the continent in half at the Neck, thereby finishing what the Children of the Forest started. I wondered if the magic that brought Jon Snow back to life would be relinquished once he defeated the Night King, but Dany would have his child, and that would be the “bittersweet” ending Martin teased. I wondered if all the Houses would become independent kingdoms, or if a council would rule them. I didn’t care what scenario we got- I just wanted it to be well written.

The resulting feeling for me, upon finishing the finale was that the episode was mostly inoffensive, but nothing special. It certainly wasn’t a strong finish. It was adequate, it was bittersweet, and it wrapped everything up as neatly as it could have given where things stood at the start of the episode. The best scenes for me were Jon’s conversation with the captive Tyrion, and the scene where Jon kills Dany. Even though I don’t quite buy the fact that Dany’s suddenly lacking in basic self-awareness and human empathy, I thought the scene was well acted and put together. Jon seemed genuinely heartbroken at having to kill her, and seeing him wrestle with his own denial was the most compelling part of the episode. I think even though he knew Tyrion was right on some level, he had to confront her himself before taking any action. The fact that Dany doesn’t show any regret really seals the deal. This actually bothered me more than her burning down civilians in the last episode. When Dany torches the streets, she’s clearly in some kind of frenzy at that point. This doesn’t excuse her actions; I’m just saying that it’s a hot-blooded, emotionally-charged decision on her part. But when she shows no hint of remorse, I really felt like the Dany we knew was lost. I think this could have worked- and indeed could have been quite powerful- if her descent into madness had been portrayed in a more natural and gradual manner.

I liked that the scene paid off her vision from the House of the Undying in season two, with the great hall in ruins, covered in snow, and Dany touching the Iron Throne but never ultimately sitting in it. This was probably the best instance of foreshadowing being paid off, as the vision leads to Dany walking through a door into the snow and finding Drogo and their unborn child Rhaego, which we now know is a reference to her joining them in death. I also found Drogon’s reaction to Dany’s death very touching. I know a lot of fans were unhappy with the way he burned down the Iron Throne, but this didn’t bother me much. The dragons are established to have a vague and mysterious telepathic connection with their Targaryan riders- hence why they always seem to know where Dany is and whether she is in danger or distress (for example, when Drogon rescues Dany in the fighting pits of Meereen in season 5, and when he comforts her after Jorah dies in the Battle of Winterfell). I don’t think Drogon is truly sentient, but I think on some basic, instinctual level, he understands there is some significance to the Iron Throne, and that his mother’s obsession with it killed her more than anything else. That’s just my interpretation of course, and y’all are free to draw whatever conclusions y’all want from the scene, but I personally believe that Drogon knew his mother was sick in some way- that she had gone off the deep end so to speak. I really liked how he took Dany and flew her east, rather than let her be laid to rest in a place that only ever brought her pain and suffering. Where he takes her is left up to the audience to decide. I think the most likely places are Dragonstone, Old Valyria, the Dothraki Sea, or the Shadowlands. 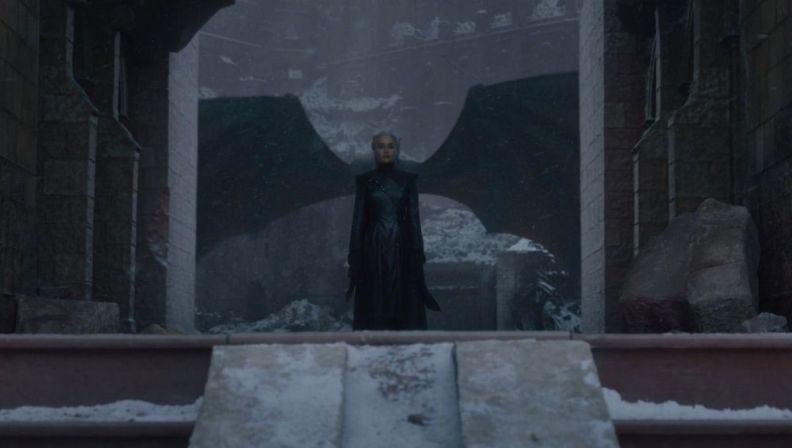 What follows this scene is the epilogue portion of the episode, and although I don’t have any quibbles regarding the specifics, I think the execution was clumsy in some places. Firstly, it seems unlikely that the Unsullied and the Dothraki would allow Jon to live. I think we are to assume that Jon turned himself in, which is fine, because it seems like something Jon would do. He’s distraught at this point. Grey Worm decides to keep Jon as a hostage to prevent further bloodshed. This seems a little unlikely but not completely preposterous. After all they fought alongside each other during the Battle of Winterfell. What I really didn’t get is why Grey Worm would give up his hostages in exchange for nothing. Jon takes the Black, but this shouldn’t carry any weight with Grey Worm, since it’s a sentence specific to the culture of Westeros. Furthermore, once he gives Jon up, there’s no reassurance that this sentence will be upheld once the Unsullied sail away. And then there’s the issue of why there ought to be a Night’s Watch anymore, given that the White Walkers are gone and the Wildlings are on peaceful terms with the North. So I was unhappy with Jon’s resolution.

As far as Bran being made King, I didn’t have too many issues with this- given the candidates available at least- but I don’t think this necessarily paid off Bran’s arc. I felt for sure that his purpose in the overall plot was tied to defeating the Night King, and when I look back on it, he didn’t really do much to help during that struggle. But if there is to be a monarch, I suppose he’s a decent choice. After all, the Three-Eyed Raven’s purpose has everything to do with the health of the realm, so I can see why they chose him.

Sansa decides she wants to annex the North and rule it as an independent kingdom. I understand this, but I had to question the effect of her blurting it out the way she did. She just demands it and Bran accepts, which made me think that the other lords present at the summit might feel that they would quite like to govern their own affairs too. 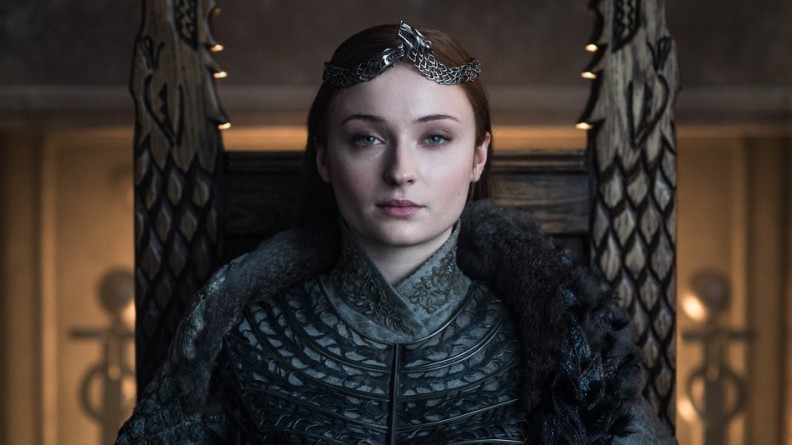 I would have liked some reference, even a single line of dialogue, regarding the fate of the Dothraki. You have this huge army holding the capital city, all of whom loved Dany, and have a culture built around perpetual conquest. They are a warrior-people, and I can’t imagine they would be too happy with Dany being assassinated. But then again, whenever a Khal dies, they pretty much just move on, so I can understand why they might just return to Vaes Dothrak. I just figured this would be addressed in the Small Council meeting, as I’m pretty sure they’d want to make sure the Dothraki are gone. They don’t have any ships of their own, since they were brought to Westeros by Yara Greyjoy’s fleet, so this would have been a good opportunity for Davos, the new Master of Ships, to say something about facilitating their safe return to Essos.

The Unsullied going to Naath makes sense, if you interpret it as Grey Worm wanting to carry on Dany’s mission of ending slavery by acting as protectors of the island. That way, he is also honoring Missandei’s memory by preventing more of her people from suffering her fate.

I liked that the show ended with an emphasis on the Stark siblings. Some people took issue with this, but I’ve always seen the show as being their story. None of them wanted to play the game of thrones, but they had to, and they’ve all emerged fundamentally changed upon surviving it. In many ways it’s a coming-of-age narrative for them. We’ve been introduced to many aspects of Westeros through the lens of these siblings, so it felt neatly cyclical to have them come together on the docks, before ultimately following their individual paths. I have mixed feelings about Arya sailing west. It seems like a strange decision, but it reflects her independent character. She’s always been adventurous and curious, and it wouldn’t have been right to have her settle down as a lady in a castle. It also wouldn’t have been right for her to go back to the Faceless Men, because the whole point of her catharsis in the last episode is to let go of violence and revenge. That was the Hound’s dying wish- for her not to become a mere killer.

As for Jon, I can understand why he goes to live with the Free Folk. As I said earlier, him going to the Night’s Watch makes little sense, and there’s no one in Westeros motivated to uphold his sentence. So letting him live free with the wildlings is about as happy an ending as he could have wished for. Their simplistic way of life suits Jon’s personality and values much better than the political arenas of the south. Some people suggested that Jon isn’t going to live with them, but is instead guiding them north and helping them get settled, since he’s not someone likely to break an oath. But this doesn’t make sense to me- the wildlings know the land beyond the wall much better than Jon does, and given they’ve lived there for thousands of years, wouldn’t need his help in getting settled. I strongly believe that we’re meant to take from it that he’s going to live with them, and that he’d be safe there from any form of retribution for killing Dany.

What did you-all think of the finale, and indeed the eighth season as a whole? Let me know in the comments! I plan to do one or two more Game of Thrones overview posts in the near future, so stay tuned.

One Reply to “Game of Thrones: The Iron Throne – Review”