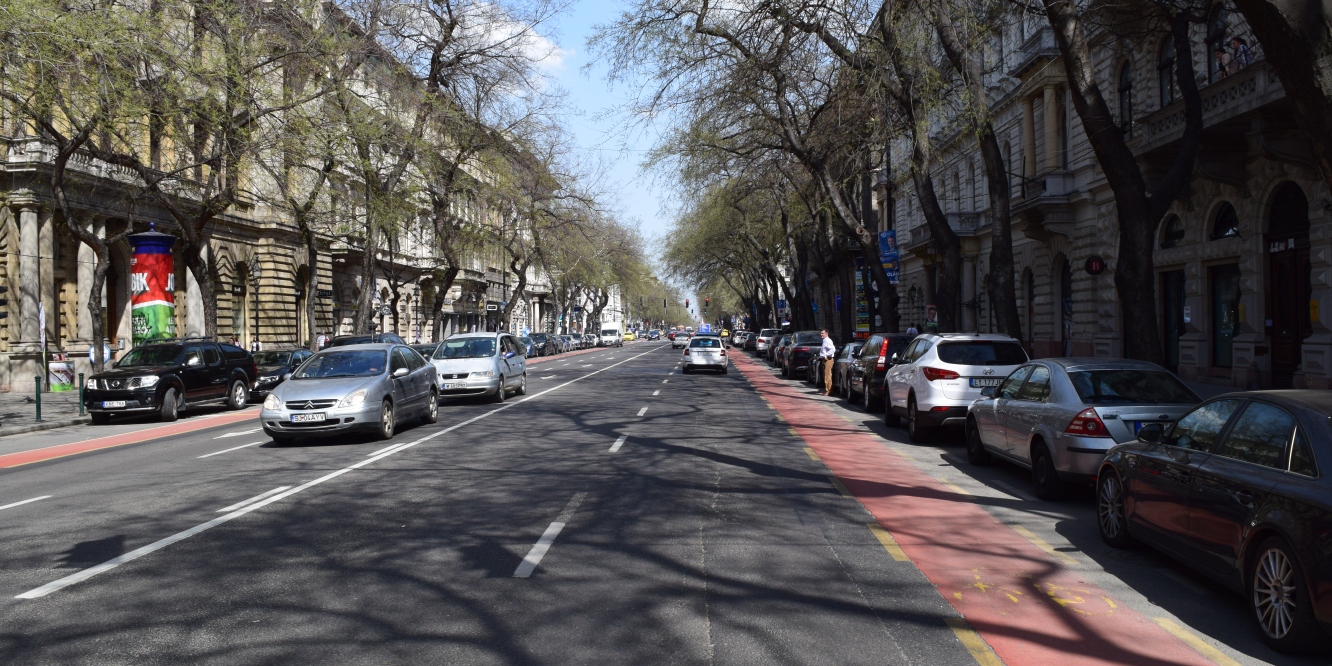 I found myself drawn to Andrássy út more than any other street during my week in Budapest. One way or another, I always seemed to end up there. I thought every street in Budapest was beautiful- in the sense that I may look at it and find it aesthetically pleasing- but I would think of them each as being parts of the greater whole of Hungary’s capital; as contributing to its collective charm. For me, Budapest was the summation of these little parts. It was the collection of old boulevards and alleyways, of streets big and small, that together gave life to what we may call the “charm” of the city.

However, there was one street that seemed to have an identity of its own, that seemed more than just another rib in the figurative thorax. Andrássy út had a particular sense of character to it; a tangible, affecting style that I remember feeling and thinking about while I was there. Located on the Pest side of the Danube, Andrássy connects Erzsébet tér with Városliget. The famous útca was recognized in 2002 as a UNESCO World Heritage Site for its historic townhouses and landmarks. The Neo-Classical facades, rows of trees, and the wideness of the boulevard contributed to a distinctly Parisian vibe that brought back memories of getting lost and debating the wisdom of accepting an offer of help from an Albert Fish lookalike- but that’s a story for another time.

As I wandered past the luxury boutiques and international embassies, I took in several of the things on offer. The first thing I did on Andrássy was take a tour of the famous State Opera House. I was surprised by how interesting I found it. The tour guide spoke very good English and told us little anecdotes about the building. Even in the 19th century, there were designated smoking and non-smoking areas. The smoking area was a corridor that separated the bar from the balcony, and supposedly it would get so thick with clouds of tobacco that young unmarried couples would use the cover to make out in secret. 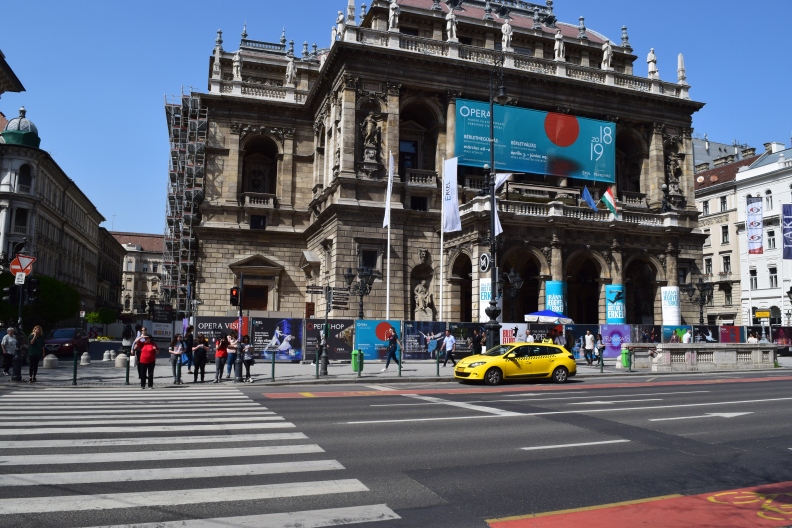 The tour even ended with a mini opera concert. Professional singers came out in full costume to sing for us, and I was in awe of what they could do with their voices. As I watched them recite a few operatic favorites, the happiness in my ears spread to the rest of my body. I thought about how lucky I was to be able to be there and experience something like that, and just how special it was. It was probably one of my favorite moments of my entire trip to Hungary. 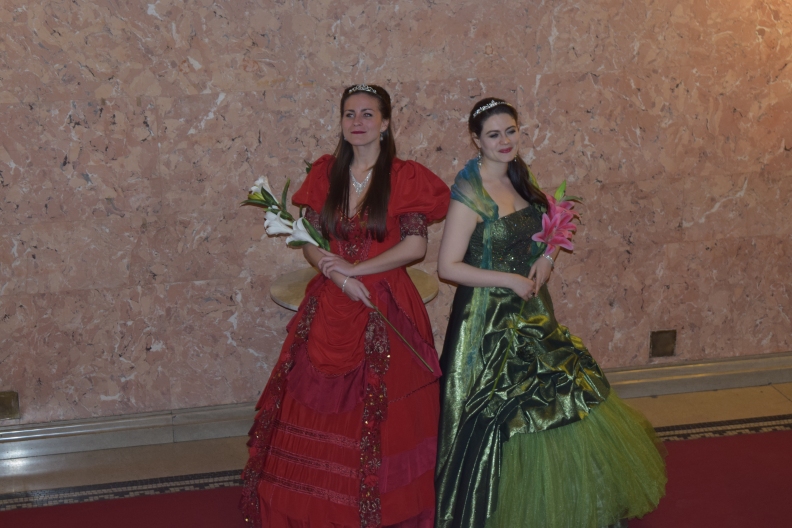 After leaving the opera house I decided to hunt down some indie bookstores I’d made a note of on my phone. I turned onto Nagymező utca- a quiet cobblestone side-street lined with theaters- that is referred to by the locals as “Pest Broadway”. I was searching for a place called the Mai Manó Gallery, but after walking up and down the street several times like an indecisive window cleaner, I ended up in a fancy place called the Budapest Operetta Theater. There were a bunch of stage hands setting up props and pulling wheeled racks of flamboyant costumes. I asked if I could use the bathroom, and afterwards decided to sit in the lounge and get a drink. I ended up chatting with the barmaid, who was super friendly and seemed to laugh at everything I said. I asked her where I could find the Mai Manó Gallery and after a fit of giggles she pointed directly across the street. 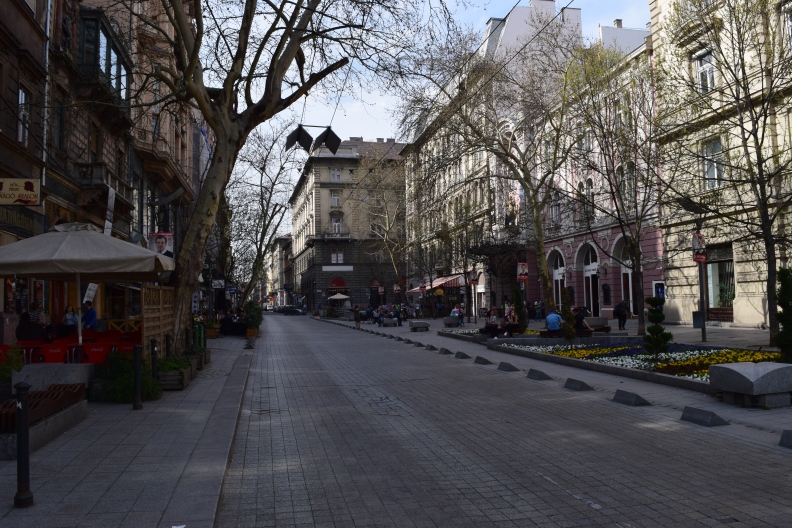 Mai Manó ended up being one of the little spots that would steal my heart. It was the perfect hidden gem I had been looking for. I entered what looked like an open door to a Neo-Classical apartment building, and found myself in a beautiful yet silent lobby. I had the strange sense that I shouldn’t have been there. Seeing nowhere else to go, I started up this staircase and came to a balcony that looked down at the lobby below. At that moment, a fellow popped his head out of a door and gave me a look. I asked if this was the bookstore and he immediately clapped his hands together and led me down a narrow corridor and into a small room with a narrow window that overlooked Nagymező utca. I felt like I was in a very nice-looking attic. A young woman in a woolen cardigan sat at the desk reading a novel. She smiled at me and asked what I was looking for.

“Books,” I said. I looked around. “What kind of books do you have here?”

“95% of them are photography books,” she answered.

I browsed the little selection, enjoying the artsy feel of the place. These are my kind of people, I thought. Sensitive, artistic, creative. Almost certainly left-wing progressives. Interested in love, beauty, and self-expression. And so keenly attached to their fantastic city. I could tell just by their faces that they loved living and working in Budapest. 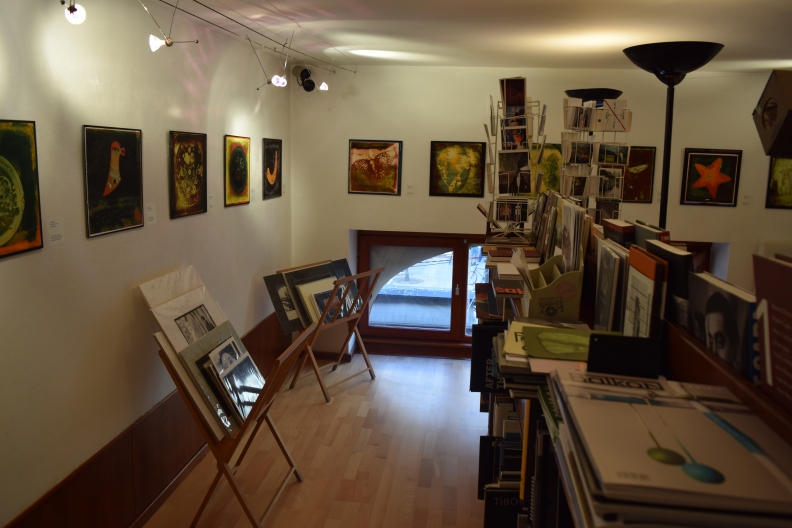 I picked up a book of black and white photographs of Budapest, each accompanied by these really interesting and poetic remarks on the city. One quote particularly resonated with me:

“Budapest is a city of startling contrasts. It is both beautiful and ugly, ostentatious and poor, filthy rich and poverty-stricken, a thousand years old and unfamiliarly new, restored, pampered and dilapidated, dynamically developing and a thing of the past.”

What a perfect description of Budapest by the book’s author- Tamás Révész. This seemed to collect my impressions of the city into a single, delicious sentence. I also picked up several postcards I liked, as well as a framed photograph of a woman standing by a train that struck me as being very Hungarian. I asked for the name of the model, hoping that she was Hungarian, and the woman at the desk studied my purchase.

“She’s beautiful,” the woman commented. “But I do not know the name.” 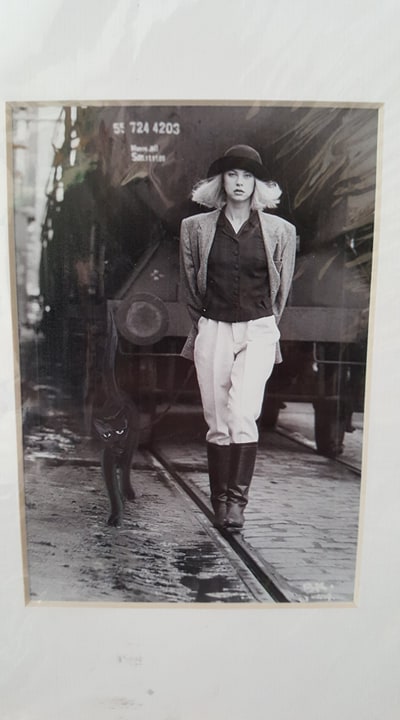 The machine that scanned my items wasn’t working, so the woman had to add up all of my many purchases on paper. The whole thing took a good ten to fifteen minutes and there was some confusion about the price of one of the postcards. The man came back in and took over.

“It is my first day,” the woman said, grinning.

I wasn’t in the slightest annoyed. I liked this place and I liked these people. They were very good to talk to and we shared a few laughs. When I left, I was in high spirits. I continued up the road and found myself at the Oktogon- a bustling intersection in the very heart of Pest. A hub of designer clothing stores, coffeehouses, streetcars, taxis, tourists, cyclists- life.

I returned to the Oktogon via tram on the last day of my trip. I had a few hours left to explore before going to the airport, and I continued up Andrássy utca from where I had left off that day I went to the Opera House. I grabbed lunch at a place called Like Étterem. The setup reminded me of a veteran’s kitchen or something. It was very casual and unpretentious. You pick what you want from a bunch of trays on a hot plate, kinda like a school canteen, and the chef dollops it onto a plate and heats it up for you. I asked him for his recommendation and the chef said that the venison goulash was very good. I got that, and it was swell. Every goulash I had in Hungary was different. Some were more like soup, but this one was much drier- more like a casserole. I really enjoyed how hearty and rustic it tasted. I drank some grape juice and became fascinated with the look of these Hungarian cartons. 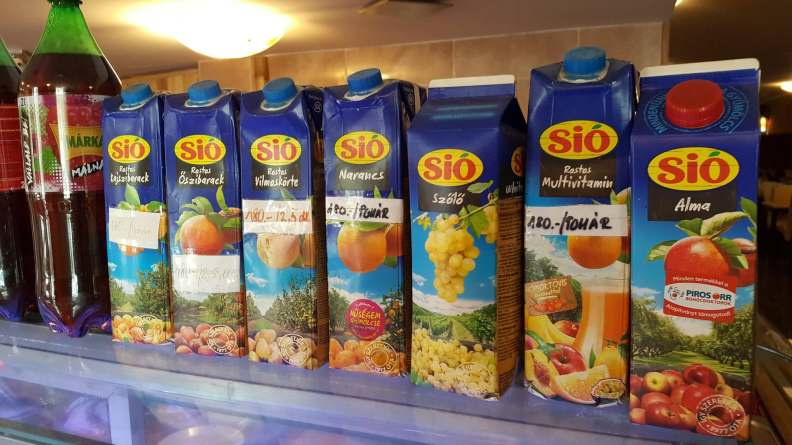 After I finished my last meal in Budapest I crossed the street, carried on up the boulevard and entered The House of Terror. Perhaps the most poignant place I visited on my trip, the building that had once served as the headquarters for the Arrow Cross (the Hungarian Nazi party) now served as a museum of both the Nazi and Soviet regimes. There were SS uniforms, Stalinist propaganda posters, old firearms, and even a tank. It’s definitely a place worth seeing if you’re ever in Budapest and want to learn about the suffering this great city has endured in the 20th century. 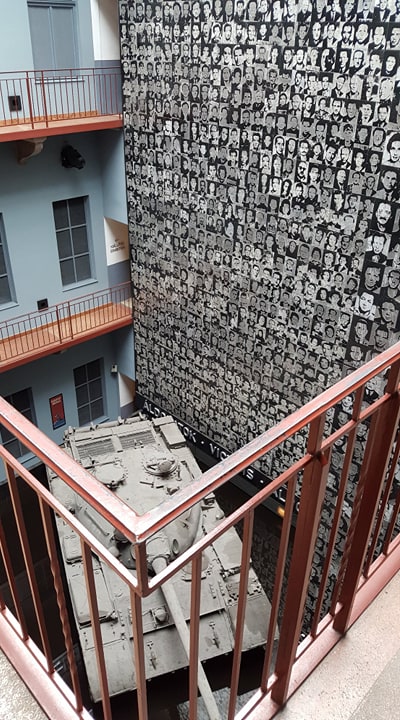 Upon leaving the museum, I went back to the Oktogon and waited for the tram to take me back to Buda. The streetcar arrived and we all crammed ourselves in like sardines in the carriage. Next to me stood a woman with a placid dog. Some teenagers got on and cooed over the dog’s fluffy features and blank expression. A guy leaning on the wall, listening to music through his headphones. Before the doors hissed shut, a man in a suit jumped on. His tie was loose. I was surrounded by all these locals, just living their everyday lives here in Hungary. I wanted to know everything about them, right down to the most mundane and trivial of details. I was sad to be leaving, and observing all these normal people got me thinking about how life in the city goes on. The city doesn’t know it’s meant to be sad because it’s my last day. What Budapest is depends on the observer; the things we feel for it come from within. Someone else on that tram could have been gazing in wonder at the sights, experiencing it all for the first time as I once did, and many others were so used to the scenery that they thought nothing of it. For them, there was no romance to be found in a streetcar ride. And though we were all taking the same ride at the same time, none of us interpreted it with the same set of connotations.