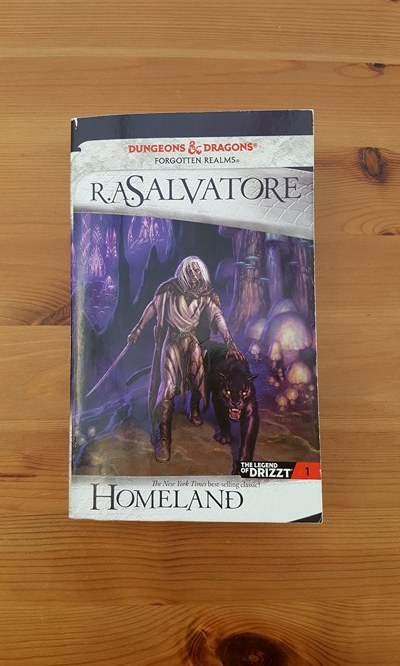 I’ve always been bad at multi-tasking. It’s a skill I want to improve, but I feel like I’m wired in some way to be consumed by a singular focus. I should have finished reading R.A Salvatore’s high fantasy hack n’ slash about a month ago, but once I started writing my novel, my rate of pages-read-per-day dropped significantly. But that experience has given me some good perspective; I realized that seeing reading as something to squeeze in at some vague point in the future was not good enough. I’m glad the writing has been going well, but I need to improve my relationship with books. And the way to do that is to set aside a dedicated reading time that is free of distractions. I’d get more reading done, and in less time; an hour isn’t much in the context of a whole day, but it’s more than enough to get quite a lot of reading done- if that hour is focused and free of distractions.

In early 2017 my reading stamina really started to grow strong again. I had rediscovered my love of fiction to the point that the musty vanilla scent of an old book would make me want to grind the pages up into lines of fine powder and snort them up my nose. Hell yeah. To cope with all the books I had to read and wanted to buy, I made a list on my phone and alternated between the dusty novels of my backlog and newer purchases. The author R.A Salvatore came to my attention during one of my many long conversations with my American roommate and best friend Aaron. Salvatore is his favorite novelist, one that he read extensively during his teenage years, and given that I’ve so enjoyed listening to his favorite band (Blink 182), I figured I’d give his favorite writer a try. As I’ve stated in other posts, I’ve been trying to build a little book club among my friends. Not only do I feel like reading a person’s most cherished novels is a way to become closer to them, but I also just love talking about books. Before 2017 I had an idea of what a “Michael-esque” book would be, but now I’ve broadened the definition of what I like infinitely.

I used to love high fantasy as a teenager, be it in the form of books like A Wizard of Earthsea or video games like The Elder Scrolls IV: Oblivion. But I fell out with the genre and figured I was done with it. Then came along the Game of Thrones TV series and I was sucked right back in. Aaron recommended Salvatore as a good choice to get me back into high fantasy, because his stories were dark and weren’t just another regurgitation of the Tolkien formula. I distinctly remember him selling the idea of Salvatore’s stories to me on the basis that they were about “immoral troglodytic dark elves that worshipped a giant spider”.

I got the first volume of Salvatore’s The Dark Elf Trilogy, Homeland, not realizing that the trilogy was a prequel to a much wider saga of novels about The Forgotten Realms. When I laid eyes upon the book for the first time I saw that it said “Dungeons & Dragons” on the top, which is strange because there are no dungeons or dragons in the novel. I started reading it, and while I thought it was well-written and interesting, I wasn’t immediately hooked. The reason for that was because in the first few chapters I had no one to root for. Every character seemed like a bloodthirsty serial killer with the innate likability of a wood tick with real estate designs on your urethra. It wasn’t until a few chapters in that the protagonist emerged in the form of Drizzt Do’Urden- and as soon as that happened I became thoroughly invested in the story. Drizzt acts as a stand-in for the reader’s sense of morality, compassion and conscience. The first few chapters before his arrival so perfectly establish the novel’s world as a dystopia. Dystopian fiction is more often associated with Science Fiction than its more whimsical cousin, but really there’s no reason it can’t work just as well in a setting of high fantasy.

The book takes place in a subterranean city called Menzoberranzan, and trust me when I tell you that there is almost nowhere else in fiction I’d rather live less. The dark elves worship a massive spider, Lolth, the Goddess of Chaos, and so their society is based largely on stabbing your relatives and neighbors up the babkas. It’s a city of ordered anarchy, in which pretty much anything goes so long as you don’t get caught. I know that sounds kind of like a contradiction- and it does take a while to grasp the psychotic hypocrisy of this bizarre, underground theocratic state, but what I mean is that the dark elves are encouraged to do whatever they can get away with. They admire the skills of deceit, treachery, and stealth; the murdering someone without leaving a trace. I know what I’d do if I did have to live in this city- I’d become a funeral director or something like that, because they must be absolutely raking it in. If you’re not discovered face-down in the shadow of a glowing mushroom with a dagger in your back, you’re bones are burped up by the enormous crustaceans that lurk in the caverns surrounding the city. The battle between the protagonist’s conscience and his need for belonging as he discovers the depths of his people’s depravity reminded me of the classic dystopian novel The Giver in a lot of ways; only with a higher density of spilt entrails and broken bone fragments.

It’s a fascinating setting, and completely unlike any other fantasy story I’ve heard of. I like how it reinvents the idea of elves as being this peaceful race of tree-huggers living in Edens of idyllic wholesomeness. I’ve also always been intrigued by the idea of subterranean adventures ever since I watched the 1959 movie Journey to the Center of the Earth as a little kid. The creatures and cultures of Salvatore’s Underdark are so viscerally brought to life in descriptive passages that have just the right amount of information to let your imagination run wild. The descriptive paragraphs never outstay their welcome and always work in conjunction with the action of a given scene, which for me is the best way to go about world building. It gives us the pieces, but lets us put them together with our own imagination.

A few weeks ago I wrote a post about why it’s so important for writers to make the situations and settings of their narrative realistic, and this book is the best example I can think of to illustrate that practice. Salvatore’s world is so interesting to the reader, because he explores the mechanics and basic workings of the fantastical society he has created. For instance, the dark elves live underground, and so their vision is based off of infrared heat signals. Salvatore has put himself in the shoes of someone living in such an environment and thought about how they interact with and perceive the world around them. That’s what we mean by realism and believability. It’s got nothing to do with gnomes and mind flayers; you bring those creatures to life by exploring their behavior in little mundane or mechanical details. And that’s how you turn raw creativity into something immersive. For me, realism in fiction is the key to immersion. I could spend hours reading about the lore of The Forgotten Realms. The hook-horrors and cave fishers feel like animals, the cold and lightless caverns of the Underdark an ecosystem that is lived in. The characters are quirky and well-written. We can easily imagine the jealous wizard Masoj, or the evil Matron Malice whose reputation as the biggest slut in the Underdark is offset by her megalomaniacal ambition.

As good as the setting is, the aspect of the novel that really stood out to me- and the reason why I became hooked- was the moral dialogue that opens with the arrival of the protagonist Drizzt. There’s a reason Drizzt Do’Urden is such a beloved character, and it’s not just his artful use of scimitars. The clash between Drizzt’s sensitivity and the ghastly dystopia around him makes for some really addictive reading. It’s the kind of book I’d bring on vacation, because you just have to know what’s going to happen next. There are schemes at work and peril around every corner. The fight scenes are badass, but truly my favorite scenes- the ones that had me sweating and shaking- were the ones where Drizzt’s personality comes into conflict with the expectations of his cruel society. I won’t spoil anything, but the book is much more nuanced than what you might expect from a hack n’ slash. The characters of Drizzt and Zaknafein in particular have such engrossing moral dilemmas. There’s a genuine philosophical depth to this story that elevates it to the top-end of its genre. I can’t wait to read Exile and Sojourn!