In my Wolfenstein: The New Order review I wrote about how I was initially drawn to the game because of an Amazon Prime TV series called The Man in the High Castle. The show was hot with me and I wanted more of that postwar alternate history in my life. I went on to enjoy the game as much as I enjoyed the show that inspired me to pick it up. When the sequel was announced and I saw that the story took place in a Nazi-occupied USA, I was thoroughly, thoroughly excited. The game was released on October 27th, and two days later on the morning of my birthday, my brother drove me to the nearest games retailer and treated me to a copy of The New Colossus.

For today’s post, I’m going to structure it as an alternating sequence of pros and cons, followed by a short conclusion. There are no spoilers here, so all readers are welcome.

PRO: The biggest strength of the first title is back- that is to say, the story and its characters. What made The New Order great was the fact that despite the absurdity of its world, the characters were complex and their journeys were compelling. It would have been easy to make the characters as crazy and cartoonish as the setting, but instead they are all very nuanced and sympathetic. The game is marketed as dumb fun and on the surface it might look like nothing more than a gallery of creative ways to maim Nazis, but once you get past the grenade smoke and pull the shrapnel out of your eyes you find yourself immersed in a masterful narrative. I love that the events of the first game are revisited in the psychological toll they take on the characters. We are given insights into BJ’s childhood trauma, his sense of grief and anxiety, and the fragility that exists beneath his tough exterior. The cutscenes are fantastic and full in equal measures of charm, wit and emotional depth.

CON: For me, the game does not make effective use of the setting. In the previous title each location seemed to showcase life in a dystopian, Nazi-ruled Europe- be it the Gibraltar Bridge Megastructure, the Croatian Concentration Camp, or the massive high-security prison in Berlin. It had a picaresque feel to it; each level a colorful vignette that explored different parts of the Reich. In Wolfenstein 2, however, we basically get 3 American cities/towns, 1 of which is revisited later on. Everything else takes place in dull, samey military bases of one kind or another. I can’t help but feel like there’s so much missed potential. It would have been interesting to see more of the American people- perhaps at some kind of “Reeducation Camp”, or a jamboree for the American Hitler youth. Perhaps the Nazis redesigned Mount Rushmore to honor Adolf Hitler, or decided to drain the Great Lakes? Imagine seeing the desertification of Michigan’s Upper Peninsula! I was especially disappointed when I found out that the optional assassination missions all take place in different districts of the 3 places we have already seen. Why can’t we see what’s happening in Evansville or Colorado Springs?

PRO: The gameplay is still super fun, and by extension the game as a whole can be thus considered a successful game. The New Colossus has earned praise for its weapons, and it very much deserves it. I had a ton of fun using the heavy weapons and blasting apart the armor plating of encroaching Übersoldaten and Laserhunds. There are plenty of moments of high-octane, intense combat which will see you spray the rooms with lead and fire before throwing a hatchet at the commanding officer’s face and diving out the way as a nearby fuel tank explodes.

CON: The level design is awful in this game. Not only are the levels uninteresting as places, but they lack the clever pacing and structure of The New Order. There’s something messy about them that makes them feel like nothing more than a sequence of chaotic action set pieces. There’s also something repetitive about them as well. You’ll navigate an area that gives you the option to stealthily take out the commanding officers or go in guns blazing, only to enter the next area and be slapped with the exact same scenario. In The New Order, however, the missions would have this well-crafted sense of narrative pacing; a given level would start out with stealth, story and puzzles, before building up to a dramatic, action-oriented finish that it earns. Not so much in The New Colossus I’m afraid. 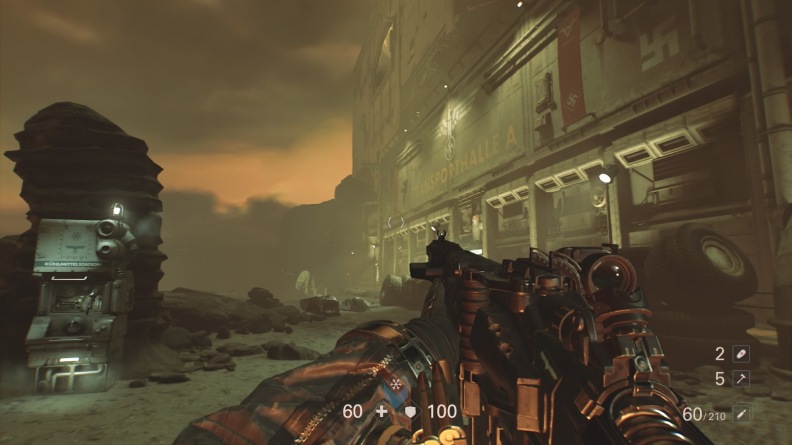 PRO: You get to ride a Panzerhund. This was something I’ve been looking forward to since the game’s announcement at Bethesda’s e3 press conference. The razor-toothed, Fahrenheit 451-style mechanical hounds are iconic to the series in much the same way that the Big Daddys are to Bioshock. Getting to ride one and douse the Nazis in belches of flame was a helluva time, and probably my favorite moment of the game from a purely gameplay perspective.

CON: The prologue is nowhere near as good as The New Order. I know this is more of a criticism of The New Colossus as a sequel rather than a game, but I was hoping for an opening a little more memorable. I liked the cutscenes and flashbacks, and the haunting confrontation with Engel served as good motivation going forward, but the fight aboard the U-Boat just seemed to fall short of the standard set by the assault on Deathshead’s castle. The wheelchair was a nice touch but quickly became an annoyance when the lack of agility saw me get helplessly riddled with bullets.

PRO: I liked the little details in this game. You can certainly play the game as just mindless fun, and as I said, the combat is a blast. But if you do want something more subtle from the experience, there are a bunch of collectible epistles that flesh out the world of Nazi America. Whenever any story exerts self-awareness- especially a video game, in which you have to kill so many people- I’m intrigued. I’m interested in redshirts and games that give them character. The game’s cover shows you standing on a mountain of discarded Nazi helmets; it’s very much marketed as a Nazi-hunter simulator. But if you take the time to read the personal logs you find on your way, you often find yourself in a moral dilemma. I found postcards in which German soldiers wrote to their loved ones back in Europe, and some of them were quite tender and touching. Underneath the futuristic Nazi armor there are human beings with families and lives entirely ordinary. The game even addresses how many people BJ has murdered; we see a grieving mother in one scene, and in another we see BJ let a German soldier run free instead of killing him. The letters and postcards are particularly interesting, because BJ does not comment on them, and we the player have to fill in for his conscience. It makes us uncomfortable, and my takeaway is that the BJ in the world of the game is reading these letters and blocking them out to make his job easier.

CON: Personally I felt the game was in need of more unique encounters in the way of boss battles and vehicles. We had the Panzerhund and that was great, but the fun was over before we knew it. Imagine that the game is a sandwich, and the repetitive shoot-or-stealth scenarios are the upper and lower halves of the hamburger bun. Well the Panzerhund is a single slice of salami in the middle. We need more filling in this sandwich. We could have explored more dynamic swimming gameplay and underwater combat, we could have navigated environmental puzzles, and the game was in dire need of some good secondary villains to terminate on the way to settling the score with Engel. Where was this game’s equivalent of the London Monitor or Deathshead’s mech? The game’s final challenge was little more than a horde of troops. I was expecting something on a bigger scale- this is Wolfenstein after all, where the writers are only as limited as their imagination. Also, the futuristic unicycle was crying out to be used in some kind of swashbuckling escape sequence! 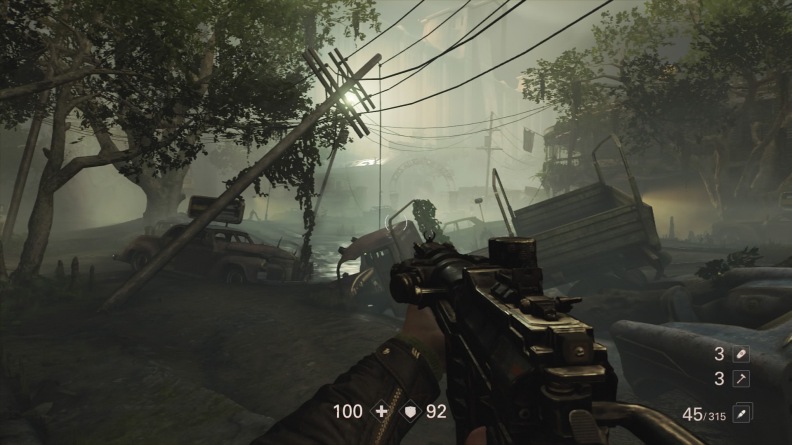 In conclusion I would say that Wolfenstein II: The New Colossus is a good game if not a great one. It is definitely worth your money, which is more than I can say for a lot of games these days. The game deserves credit for its artistic integrity and the lack of microtransactions or tacked-on multiplayer modes. The writing is excellent and there’s a good amount of content to keep you busy for a while.  What did you guys think of the game? Let me know in the comments!