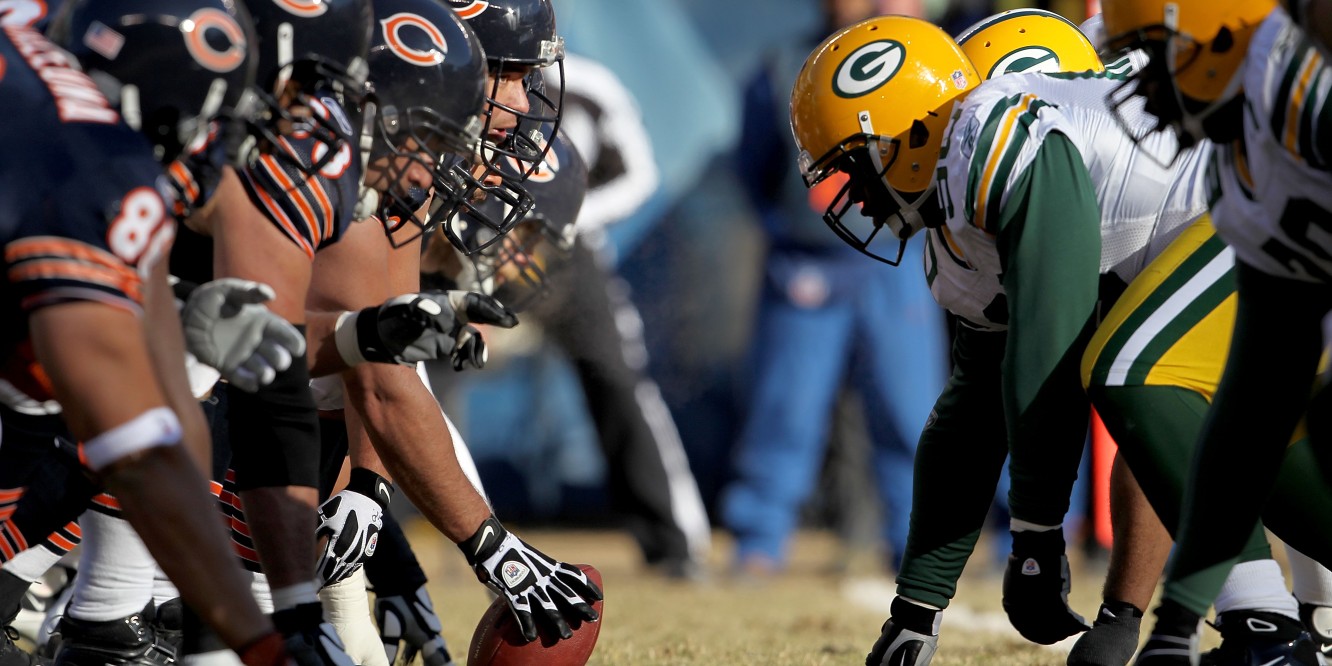 As I’m sure you’re aware, the Green Bay Packers and the Chicago Bears face off against each other tonight at Lambeau Field. What’s significant about this game is that the Packers have the chance to take the lead in the series for the first time since Clarke Hinkle was handing out concussion sandwiches in the early 1930s. As the rivalry stands, both teams have 94 wins each-thanks to the swing of Mason Crosby’s right boot on the night of December 18th, 2016. It’s the first time things have been all square between these two powerhouses since September 24th 1933. It’s a year that’s pretty disastrous in Packer history because it was the first season since the team’s founding in 1919 that they had a losing season. Finishing with a record of 5-7-1, Green Bay’s misery was compounded by the fact that they lost to their bitter Illinois rivals three times in a single season. From that point onward, the Bears went on to dominate the head-to-head matchups and by 1960 they were leading the series by 24 wins. The deficit was mitigated in no small part due to a player who earned the moniker “The Bear Killer” in the 1990s. I’m referring of course to Brett Favre, who famously went on a merciless 10-game winning streak against Chicago in that decade. This is also the longest winning streak in the series. When no.4’s storied career was over, he had 23 wins over the city.

There’s a convincing argument to be made that the Packers-Bears Rivalry is the greatest in football, if not all sports. No two teams in the NFL have played each other more times than the Packers and the Bears, so no other series even comes close in terms of history. And whenever the great thinkers of sports attempt to breakdown what exactly makes a rivalry great, history is always cited as a factor. The rivalry of two cities, two states, can ultimately be traced back to the rivalry of two men- George Halas and Curly Lambeau- both of which can be considered the two most influential figures in the league’s history. Simply put, the NFL would not be what is today if it weren’t for the love-hate relationship between these two pioneers. The fiery Halas and the more subdued Lambeau set the tone for the series, and perhaps that of all the great rivalries to come, when they went head to head in 1921. The Bears (then named the Staleys) whooped the Pack 20-0. Things were bloody from the very outset, with Chicago guard John Taylor breaking the nose of Green Bay tackle Howard Buck with a nasty sucker punch. Things got even more tense later that year when Halas actually expelled the Packers from the NFL for playing a college player- Notre Dame’s Harry Anderson. Lambeau promised to obey the rules the next year and Halas had them reinstated, but not before closing a deal with Anderson to play for Chicago.

The series also saw the first official player ejections in pro football. In 1924 Packer’s Walter Voss and Bears’ Frank Hanny engaged in a bloody fistfight after they had exhausted their lists of insults. They would not be the last members of their respective franchises to take a swing at the other.

Because the rivalry of these two franchises is so integral to the founding of the league, it transcends the very concept. Every rivalry since has been an imitation of the dance Halas and Lambeau started. Both of these men were insatiable winners, whose drive to beat the other became something of an all-consuming obsession. They instilled a culture in their respective camps whereby nothing else mattered in a given season except to beat the other team. Their desire to one-up the other landed them many championships, and that brings me to the next point that is often brought up when determining the greatness of a rivalry. Yes, the franchises are old. They have history. But both have a successful history. Much in the same way the Celtics and the Lakers represent the pinnacle of excellence in basketball, the Bears and the Packers can claim to be the two most successful franchises in pro football history. And before all you Patriot fans spit out your cranberry juice over your laptops and start pounding the keyboards with furious sausage fingers to articulate in far too many words how I should have been aborted, I want to remind you that pre-Super Bowl world titles do count. All they did was change the name. The Packers have the biggest total of championships in pro football with 13, and the Bears have the second-most with 9. The Bears can also claim to have the most wins of any NFL franchise with 744 regular season victories. They also have the most Hall of Fame enshrinees.

The legendary Packers defensive end Willie Davis once said “There have been great rivalries in American sports, but none has had the fire in the belly that the Packers and Bears have had. None has had as much winning or emotion associated with it.”

In conclusion, I would argue that the history between the two teams and their continued successes makes this the greatest rivalry in the NFL, and it’s right up there with Duke-NC, Ohio State-Michigan, and Ali-Frazier as the best in all of sports. It’s nasty but I wouldn’t say it is the most vicious series out there. Beneath all the animosity there’s an underlying current of respect and admiration, much as there was between Halas and Lambeau when it all started. But history and success are merely the criterion I’ve chosen to work with. What do you think makes for a great sporting rivalry?