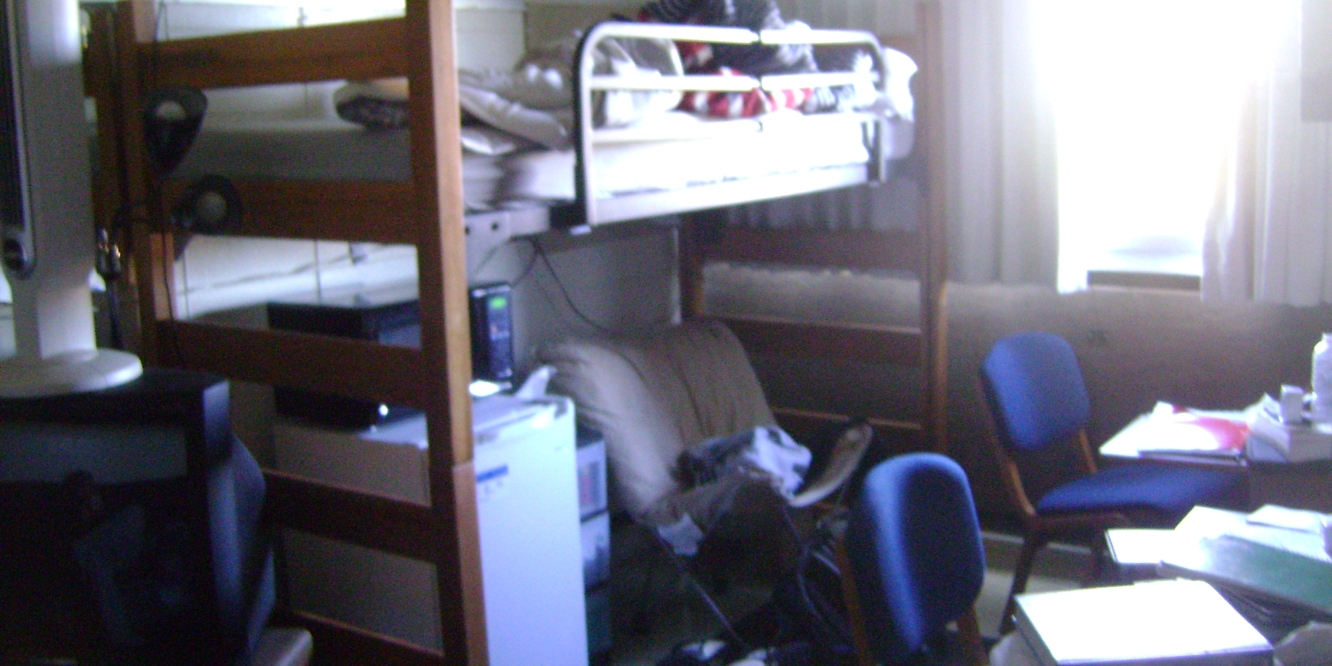 I learned years later that during my first week of college in the USA, Akbar had Skyped Aaron- who was still at his family home on an Indian Reservation near Green Bay, the opposite side of the state. This video call is significant. At this stage, it’s just me and Akbar living on the fourth floor of Towers North. The Americans would be arriving in the coming days, and Akbar had presumably called Aaron to go over some things he needed to provide for the room. At some point during this conversation, Akbar had told Aaron “Hey, there’s this British guy- a Chelsea fan- who’s living here across from us. But he’s very shy, so we have to actively include him.”

I would come to spend more time in Akbar and Aaron’s room- 459- than my own. There was a running joke that I was the “third roommate”, and I often left my belongings there. One time I had gotten so cheeky with the shoes I had left on their floor and raincoats I had left hung on their bedposts that Akbar decided to teach me a lesson by wearing my shoes to a conference he was attending in La Crosse, which meant that by the time I woke up around noon, I had no footwear for the day. A routine fast developed. Within a few weeks of knowing them, it got to the point that it was expected that I go over to their room as soon as I woke up. And if I didn’t, I would get a text or a knock on my door asking what was wrong. My own room- the number of which and can no longer even remember- was just where I slept and stored my clothes. For the first time I no longer worried about what to say and when. I was natural and comfortable in my skin. I was myself. I had ceased scrutinizing every little thing I said; I fell asleep quickly every night because I wasn’t replaying every social interaction of the day in my head.

But how did I arrive at this point?

If you read my previous essay in this series, then you know how Aaron- so named for his resemblance to the greatest quarterback of all time (Sorry Johnny U) – had asked me to lunch. From that one meal we had together, it seemed like I had instantly signed up to a contract, that I had attained an exclusive, lucrative membership of sorts. Because I knew straight away after that first lunch that not only was Aaron now my best friend, but that I would never go to the cafeteria alone ever again.

That same Friday, I got a text from Aaron on my TracFone- which was so far behind the capabilities of everyone else’s cellular devices so as to be mistaken for a prop from the Flintstones– asking if I wanted to join him on a wander downtown in search of adventure and excitement. It promised to be a good opportunity to test my social skills, get to know the local area, and to spend more time with my new best friend. There was no specific goal in mind, just a vague notion that if we walked in the direction of Eau Claire’s famous Water Street that something would be going on. Our little jaunt proved unsuccessful- but I have learned over the years that misadventures are great opportunities for bonding.

We got off to a poor start. We were walking across the footbridge that leads from campus towards Water Street, when two girls with slim waists and the yellow heads of Prussians come walking up briskly by the side of us. For sure they were heading to some wild house party in the depths of Eau Claire. I could picture it; it would be a wooden, two or three story house with a large porch, the kind of Victorian remnants once inhabited by the old lumber barons of Eau Claire- and it would be fit to bursting with over a hundred red solo-cup wielding sophomores, bouncing up and down to a mashup of rap music and EDM (genres that, at the time, I knew nothing about). The girls were walking arm in arm and gushing about something exciting. No– I made that up. But that’s how I wanted to perceive them, both at the time and in my memory. From what I remember, they were walking normally and not really saying much of anything.

“Talk to them,” Aaron instructed.

“Sure you can. Just say “Evening ladies” in your British accent and they’ll fawn all over you.”

I started to sweat. My lips were considering it. The problem was what to say afterwards. How did I justify randomly approaching these sweet Wisconsinite girls? What reason did I give? What would I tell them?

The moment came and went. The girls walked on to wherever they were going. They were probably headed to some bar where we couldn’t follow. After all, at the time we were both 19 years old and therefore below the age limit. We walked up and down Water Street, going as far as Dooley’s before heading back. It was a light night. There were plenty of students dipping in and out of bars that looked like they were modelled on the saloons of the Old West. Water Street is an historic part of Eau Claire, and you can tell this by some of the old brick buildings- the echoes of what was once a frontier town, a logging town, which had transformed from the beginning of the 20th century to the new millennium into a small city dominated by the university. Water Street had been ruled once by the thirsty, German-speaking loggers and their flatulent whores. Now it served the same purpose, had endured, but the loggers and the whores had not. Now it was the watering hole of Oceanography and Kinesiology majors, of juniors, seniors, and all those with fake ID’s.

Fake ID’s were not something either of us had in our possession, so our trip seemed kind of stupid. I was aware that other international students had procured them, but it was not something particularly high on my agenda. I had more bad memories from alcohol than good ones, and something about the party scene had always instilled a fear in me. I liked that Aaron, at the time, had no thirst for alcohol either. And it was reassuring to see someone reject it who was tough, athletic and confident.

As we made our way back down the street, Aaron got this crazy idea that we should pretend to be roaring drunk, and get on the special bus that returned inebriated students to their dorms. The Drunk Bus or whatever it was called. The part of me that yearned for adventure seriously considered it, but the self-conscious side of me was unsure of my ability to be a convincing actor. At that time in my life, the fear of failure dictated everything. We ended up walking past the bus anyway, as I suddenly had to piss like a racehorse. I asked where the nearest pisser was and Aaron suggested we continue our adventure downtown rather than give up so soon. I was excited to tell him that I knew of this hipster joint called The Acoustic Café that I had been taken to by Andrew during my International Orientation. We walked on in that direction, and by the time we got there, it was late at night. They were open, but the restrooms were cordoned off and the waitress said something about them being out of order.

At this point I was getting pretty desperate. I asked her to reconsider the status of the restrooms but she said we couldn’t go in. Aaron and I then decided to call it quits on our quest for wild excitement. I kept thinking that the chance was blown when those girls had walked past us on the bridge. I had set the tone right there and then, by not speaking up.

After rushing past the darkness of Owen Park at night, which was sure to be hiding the next Ted Bundy in its sleeping bushes, we made it to the footbridge. The shadowy façade of the library came into site, and it was decided we would go there. By now I had the disjointed gait of a horse walking in the aftermath of having one of the knees of its back legs done in with a sledgehammer. We reached the library, which was brightly lit but completely empty, and I was able to relieve myself. We laughed about our foolhardy excursion and walked back up the dreaded hill that lead to upper campus. At this stage in the night there were streams of drunken students (mostly underage) leaving the dorms for whatever awaited them across the river. Groups of blonde girls in denim short shorts closely guarded by sharklike males grinning with wet mouths out of faces shadowed by backward baseball caps. I remember one such passing jock remarking to us- loud enough for half the street to hear him- “Where ya going? The party’s this way man!”

I wasn’t tempted. I had a friendship group now. My loyalty was to Aaron, and whatever he said, I would do. I sometimes think of myself like a feral cat; at first I seem suspicious, but once a true and loyal companion emerges, I become completely dependent on and clingy to them. I have always been someone that forms close and strong friendships than someone that has an army of contacts, whose very smile can win the undying loyalty of a room full of strangers. Now, it seemed, I belonged. With Akbar and Aaron, who had many friends on lower campus, I had access to things like playing soccer regularly, someone to hit the study room with, a bunch of lads to make dirty jokes with at the cafeteria.

The events of my semester abroad took me completely by surprise, and to this day I’m still a little shocked by it all. I have to remind myself that once I felt so desperate. But this story is a long way from being finished. What started in 2012 set in motion the events of the next five years. Stay tuned for the next episode in my series of personal essays! Oh, and if you have had similar experiences with shyness and anxiety, it would mean the world to me to hear from you!

One Reply to “Making Friends in the USA Part 3”